Chinatown residents begin a hunger strike to fight for their homes 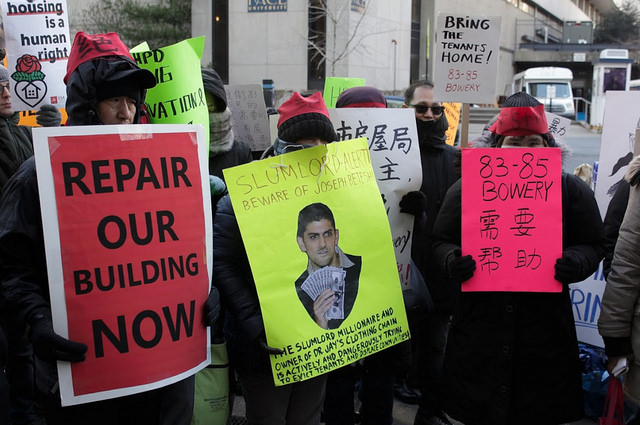 Chinatown tenants today began a hunger strike in an ongoing fight for their homes. It’s the latest development in a two-year battle between the tenants of 85 Bowery and their landlord, Joseph Betesh.

Two weeks ago, the Department of Housing and Preservation issued a vacate order for the 75 people living at 85 Bowery. City officials deemed the building uninhabitable because of an unsafe central staircase. They required Betesh to make repairs before the tenants would be allowed back in.

Meanwhile, tenants have been living in nearby hotels and shelters because Betesh missed the city’s deadline to complete the repairs.

Tenants say that Betesh is using the lack of repairs as a tactic to force them out and raise the rent with new tenants.

E-Joo Young was at home with her grandchildren, a four-year-old and a newborn baby, when she was forced out of her apartment.

“I’ve lived in the building for twenty-some years, but they kicked us out in two hours,” she said.

Joe Betesh, the owner of 85 Bowery, said in a statement, “Our team is working diligently each day to repair and replace the severely damaged infrastructure of 85 Bowery and make the building safe for habitation.”

The strike began on the eve of the Chinese New Year, which starts on February 16.

Sarah Ahn, an organizer with the Coalition to Protect Chinatown and the Lower East Side, said the holiday focuses on the importance of family and people’s homes.

“The new year for the tenants is very symbolic,” she said. “It has a lot to do with home.”

Without access to their apartments, the tenants can’t use their ancestral shrines to properly celebrate the new year.

“We are supposed to be celebrating the lunar new year,” said E-Joo Young. “Instead we are out on the street.”

Six tenants say they will continue the hunger strike until the city pressures Betesh to make the required repairs and allows the tenants back in their homes.