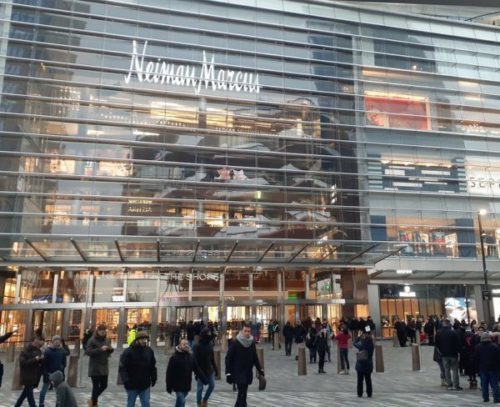 The outside of the Shops and Restaurants at Hudson Yards. Photo By Karen Watson

The outside of the Shops and Restaurants at Hudson Yards.
Photo By Karen Carmela Watson

New York blinked and an enchanted pop-up city appeared in a forgotten part of town.

Complete with cloud-reaching steel and glass high-tech towers, fashionable, smiling people and its very own landmark – a curious burnt-bronze colored, climbable structure called The Vessel – Hudson Yards brims with promise of a glimmering and futuristic way of living.

Its website touts itself as exactly that: “Hudson Yards has become the cultural center of Manhattan’s New West Side…a template for the future of cities..”

Now the first Christmas season has arrived with its dazzling light shows and invitation to “Shine On at Hudson Yards.”

Broadway actress, Taylor Symone Jackson, 26, was visiting the mall for the first time in December. 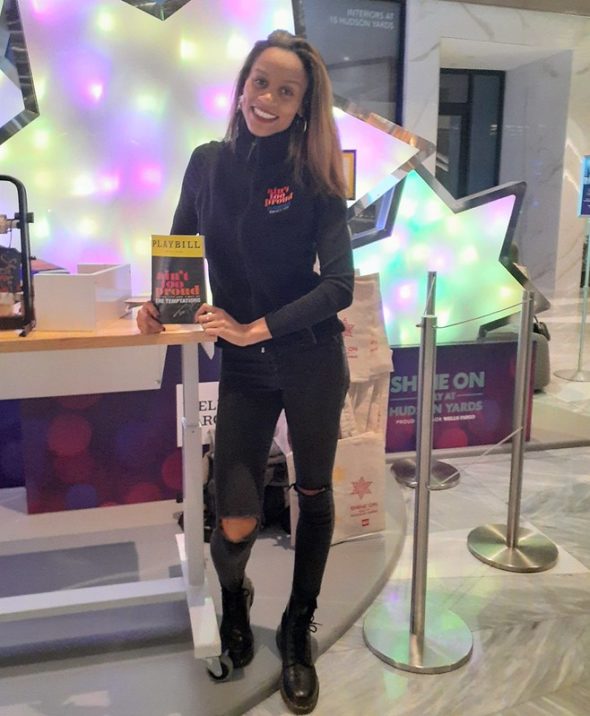 “It’s great, I love it,” she said. “It’s new and beautiful..I love the glass [large windows]. And I love that they have Shake Shack right around the corner [on the 4th floor]. Muji is one of my favorite stores, and then right across the way is Uniqlo. I have never seen a Uniqlo store, I love it. It’s affordable..majority of it is.”

Perched on a four-block area from 30th to 34th Streets and 10th Avenue in Manhattan’s newly re-zoned and rapidly developing west side, the neighborhood commands a clear view of the Hudson River and the southern tip of the borough.

Through some architectural wonder, this whole compact, residential and commercial development, sits atop platforms built over an active storage train yard, located in a once neglected and underdeveloped section of New York.

Unlike Jackson, however, not everyone has a glowing view of this new multi-billion project.

Another claimed that its many high-end stores and luxury condominiums would exclude many from becoming a part of the community.

Some architects and economists said the building designs were uninspired, that New Yorkers would not travel across town to shop in a fancy, upscale mall with mostly designer brands and celebrity-chef restaurants.

But the numbers say otherwise.

Eight months into its grand opening, New Yorkers and tourists alike have poured into Hudson Yards in numbers that exceed the expectations of supporters and critics alike.

According to a recent CNBC article, the mall expects to welcome over 20 million visitors by the end of its first year, with about half of their business being generated from Manhattan shoppers alone.

On the first floor at the Shops and Restaurant at Hudson Yards,  Rolex employee, Stephen Michael Gardner, 61, said the store was really busy, with sometimes up to 400 shoppers a day.

“I have been working here since August,” he said. “I love it here, it’s a wonderful place to be in, the people are nice. It’s busier than usual for the holidays, believe me, there’s lots of people in and out of the store.”

With the Christmas season in full flow, the signs and sounds of the holiday are everywhere.

On entering the 28-acre space, especially after 5 p.m. when the light show goes on,  one is greeted by loud holiday music, small trees draped in red and purple lights scattered around the courtyard, a glimpse of a quilted-looking, glowing structure in the background called The Shed, and the public square’s centerpiece: the Vessel. The shiny, other-wordly, artistic creation, rising 16-stories-high, surrounded by tall, glowing buildings and tourists turning in circles with phones held high, trying to capture the tips of the towers.

Immediately next to the busy stair-climbing, selfie-occupied Vessel is a huge, star-shaped, overhead holiday installation sparkling with 12,000 LED lights, taking its cue and theme from the constellation Lyra after which it was named.

The lyra changes colors and patterns continuously as holiday and classical music pour out and draw people in to look up at the dramatic display, exclaim, point, spin in circles to the music and patterns, while taking more pictures. In the cold. 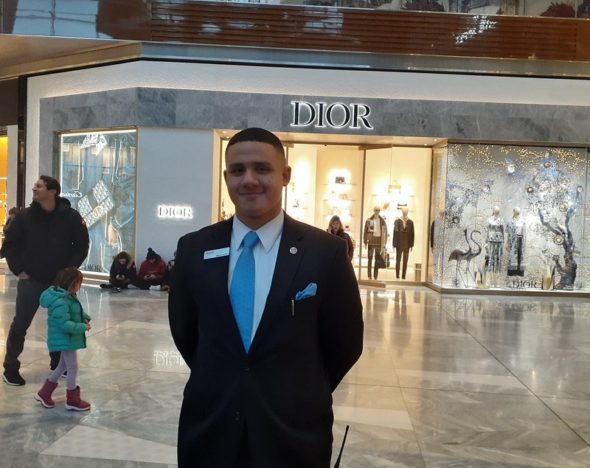 Adrian Ramos is a greeter at Hudson Yards. Photo by Karen Carmela Watson

At the entrance to the The Shops, standing under two indoor lyras doing their dazzling,  holiday routine, a smiling greeter, Adrian Ramos, welcomed visitors.

“There are a lot of tourists coming in,” he said. “A lot more have been coming since the holidays..it gets hectic, a little bit crazy.”

While some critics would probably cringe on hearing “affordable and Hudson Yards” mentioned in the same sentence as Jackson did, an exploration of the shops –  many with large holiday discounts advertised – and restaurants does show a mixed-priced range of shopping and dining experiences.

On the third floor, H&M was doing brisk business for the holiday, while across the hall, Zara had a line of customers waiting to check-out their items. Madewell, on the second floor, had holiday discounts on many clothing items.

Neiman Marcus with its elaborate, interactive Christmas window and entrance display, along with an in-house DJ entertaining shoppers, had a mix of expected high-end items but also some small gift items priced under $50.

“I never even heard of Dior before I came here,” Ramos, 21, a Bronx resident said, turning to the store. “I did feel that everything was out of range at first but there is something for everyone.”

In addition to the decorations in most of the 100 storefronts, the ever present sound of Christmas carols follow shoppers from the courtyard throughout the seven floors of the shopping complex.

Walking in the hallway just outside Zara, Liana Kardaras, 18, was visiting with her friends from New Jersey.  She said she was not focused on the decorations.

Every Tuesday and Saturday until January 5, the area in front of Dior on the main floor, and other designated areas on the upper floors, become the venue of extravagant holiday activities in celebration of the neighborhood’s first Christmas.

All open to the public, performances have so far included the Elan Artists’ dancers doing their toy soldiers routine, The Brooklyn Ballet, The New York City Gospel Choir and several ensembles playing classical and holiday music on various instruments.

For families with children, cookie decorating, an upcoming breakfast with Santa event and interactive wall art keep them intrigued.

William Chan, 40, visiting with his family from Toronto, Canada, sat on the floor next to his sister and another family member as his children “draw” on an interactive wall exhibit called Off the Wall.

“We checked out the Vessel which was pretty cool and it was right around when it was getting dark so we got some good lights as well,” he said. “Now we are just walking around and the kids seem to like this wall of sequins where they could draw.”