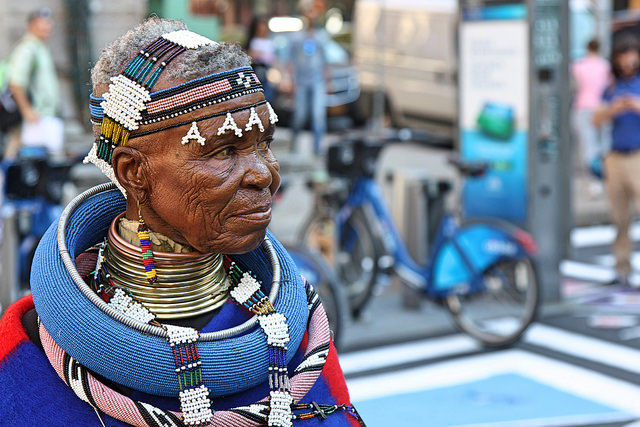 An ordinary Citi Bike Station in Tribeca was transformed into a celebration of South African artist Esther Mahlangu as a mural inspired by her colorful iconographic work was unveiled on the street yesterday.

Mahlangu, 81, regally stood over the work painted on the corner of Tribeca’s Franklin Street and West Broadway. She wore her native Ndebele tribe garments and traditional rings around her neck and ankles.

Mahlangu’s art, commissioned by world-renowned brands such as BMW, Fiat and British Airways, represents large-scale contemporary graphics inspired by her heritage. Now Citi Bikers will get to park their bikes literally on a mural that embodies a celebration of South African culture. Citi Bike partnered with South Africa Tourism and South African Airways to fund the mural. 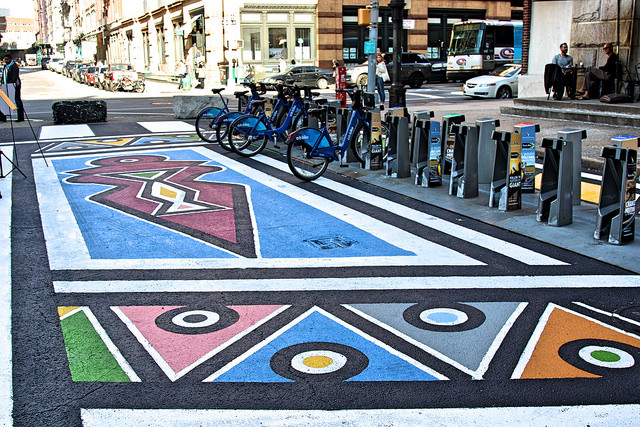 Standing on the mural, representatives of Citi Bike and South Africa Tourism delivered a lively press conference to a small group of people that gathered round to listen and politely cheer when the artists were introduced.

“This is the third mural we’ve painted at a Citi Bike station through the Department of Transportation art program, but it’s the first one we’ve done with the support of a partner, who gave us the opportunity to share Esther’s traditional artwork with the people of New York,” said William Bissell, director of Sales and Partnerships at Motivate International Inc., which operates the Citi Bike program.

“Bringing bright colors allows us to be joyous, a lot of the hues I used I’ve seen in Esther’s work and I really wanted to stay true to that design,” said Roberts.

A brief ribbon cutting by Mahlangu was marked by most people holding their phones up in the air, slightly tilted towards the ground to get a better perspective of the mural’s patterns.

Mahlangu, who artistically follows traditions inherited by her mother and grandmother, said the idea of passing on female imagery is something that she defined as “transforming her skin.”

“I’m proud of seeing other women taking these things forward,” she said. 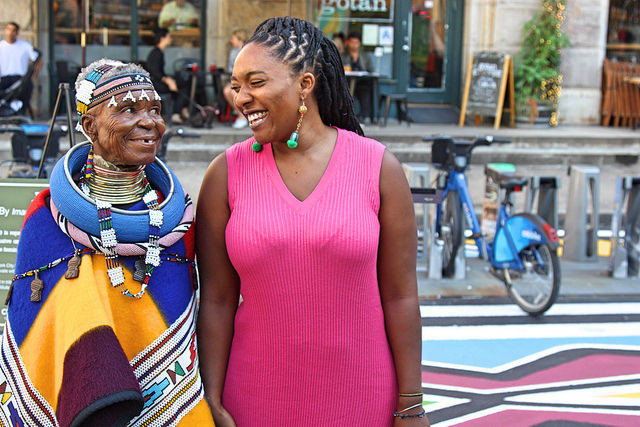 And Roberts’ art is Afro-centered and revolves around the African American culture fueled by her parents. It reflects an ambivalent struggle, first as a woman and then as an African American. Although Roberts’ work is what she called “Afro-conscious”, it’s also charged with a strong feminine identity that in being amidst race is not necessarily a racially connected experience.

“To be a woman in the world is a battle that everyone can relate to, something that surpasses race,” said Roberts. “Now I have a young daughter and I feel I have to put out images in the world that allow her to feel empowered and that push her to be the best she can.”

In 2009, Roberts moved from her hometown, Washington D.C., to New York, where she now teaches social studies at the South Bronx Community Charter High School. It was in this city that, for the first time, race became relevant to her both as a woman and an artist.

“My inspiration came when I moved to New York, when I found myself entering spaces where I was the only black woman, where the majority of people doesn’t necessarily reflect your own journey,” said Roberts. “I felt an unheard voice. I was always challenged to document the African American experience.”