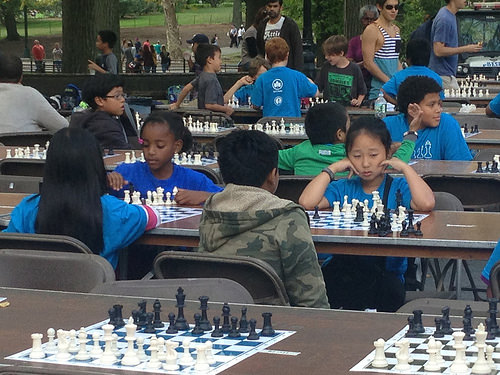 Nearly 700 chess tournament players flaunted their brain power at Central Park yesterday as part of an emerging citywide love for the game.

The 14th Annual Chess-in-the-Park Rapid Open tournament was open to people of all ages and skill levels, who were equally puzzled and intrigued by the game. The players held classic thinking poses, fist to jaw and hand on temple. Suddenly, a piece would move forward, followed by a hit on the clock, a satisfied smile, a two-minute break, then all was repeated.

“I think that chess is not only a motivator, but it’s really good for you,” said Ammy Rodriguez, 16, assistant director for the tournament. “It keeps you thinking analytically. It keeps your mind sharp. “Chess isn’t something that is boring. It`s actually something that`s really fun and can be entertaining, because you’re waiting to see what your opponent does.” 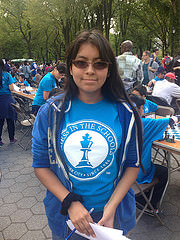 This brain fiesta was arranged by a nonprofit organization Chess-in-the-Schools, who believes chess is an important knowledge that can help kids to achieve their goals in the future. The program is in all five boroughs in Title I schools, where more than 60% of the students are eligible for the free or reduced cost federal lunch program.

“It (chess) taught me a lot about patience and goal setting,” said Shaun Smith, director of school programs. “When I was really little, I was playing and lost all the time. I`d go to my father and I’d say, how do I get better at it, and he said, you can’t just expect to go play and get better automatically. You need to go over your games, you need to study, and when you put in the work, you get quick results.”

In 1986, the American Chess Foundation started teaching chess in schools. Since then, the magic of moving pieces opened to more than 400,000 students in New York City public schools. In 1997, the focus had shifted completely and the name of the program changed to Chess-in-the-Schools.

“It gives them (kids) a chance to slow down and think, and they actually like it,” said Marley Kaplan, the president and CEO of Chess-in-the-schools. “It`s a game and kids love games. They don’t get bored at all.”

Kids of all ages can enroll free of charge. Teacher-training programs support any inspired teacher to bring the program to their school. They will learn how to play and teach, plus are given the chess equipment. And the movement grows every day. The main goal is to reach the majority of schools in New York.

“It teaches you resilience,” said Kaplan. “You don’t just give up at chess. You just keep forging ahead, and so all of these things are like non cognitive skills that are necessary for anybody to succeed in school and in life.”