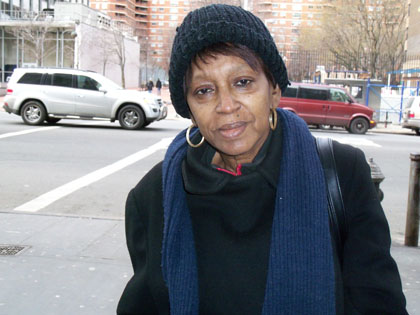 Bellevue patient Beverly Farmer has been coming to the hospital since doctors there saved her life after a heart attack five years ago. Photo by Simon McCormick

Carmen Serrano’s face stiffened when she heard the hospital she’s gone to her entire life could face a steep budget cut. The 55-year-old is currently unemployed and on Medicaid.

Serrano comes to Bellevue Hospital Center at least once a week for a chronic medical condition she declined to name.

“It’s almost like I have a job at Bellevue, I’m in here so much,” Serrano said. The life-long Chelsea resident said her entire family relies on the care at Bellevue. “If this hospital closes, where will I go?” she said. “What will I do?”

Bellevue is one of New York’s 11 public hospitals run by the city’s Health and Hospitals Corporation. Under Gov. David Paterson’s proposed budget, which would go into effect in April, the HHC would see its funding slashed by $370 million. The cut would come at a time when more uninsured New Yorkers than ever are using the city’s public hospitals.

Over the last four years, the HHC has seen a 14-percent increase in the number of uninsured patients coming through its doors. In 2009, 453,000 people without coverage visited HHC hospitals. One of those patients, 75-year-old Harlem resident Beverly Farmer, said she became loyal to the hospital five years ago when she suffered a heart attack.

“They saved my life,” Farmer said. “I’ve been coming here ever since.”

In an e-mail, HHC President Alan Aviles said a deep budget cut would make it extremely difficult for his organization to continue assisting the poor.

“Providing health care services to the uninsured cannot be done with magical thinking,” Aviles said. “It comes at a significant cost.”

Part of that cost results from the sheer numbers of patients who visit HHC hospitals. Bellevue alone took in more than 100,000 emergency room patients in 2008, according to the hospital’s Web site.

Bellevue’s main entrance is host to a constant stream of foot traffic during the day. On a weekday afternoon, a young mother slowly crept along the sidewalk, trying not to wake her sleeping baby resting on her shoulder. An elderly man who just left the hospital sat in his wheelchair, waiting for a taxi, as a teenage boy raced past him, hurrying to catch a bus. A middle-aged patient stopped at the food cart adjacent to Bellevue where he chomped into a hot dog before walking toward 26th Street.

In the late evening, the buzz of activity had died down outside Bellevue, and first-year resident Dr. Megha Shah left the hospital after a 12-hour shift. She said even without the potential budget cut, Bellevue’s doctors struggle to meet the needs of their patients.

“We already work at a very minimal budget,” Shah said. “The staff and doctors are overworked, and we don’t have enough nurses. A budget cut would make that a lot worse.”

HHC spokeswoman Pam McDonnell declined to comment on what effect a large slice in funding would have on patients and staff. She noted that nothing in Paterson’s budget is written in stone because the state Legislature has an opportunity to make adjustments to it. Paterson is also under heavy pressure to resign amidst allegations that he pressured a woman to drop assault charges against one of his top aides. It’s unclear what effect his resignation would have on the state budget.

“When final financial decisions at the state and federal level are made, HHC will weigh the impact and act accordingly,” McDonnell said.

But Aviles contended that if the budget were to pass as is, layoffs would have to be considered. A large part of the $370-million decrease in HHC’s funding would come out of the Disproportionate Share Hospital payment program. Disproportionate Share payments subsidize hospitals that care for large numbers of poor patients.

Under Paterson’s budget, the HHC would get close to $300 million less in DSH subsidies than it did last year.

“DSH funding is the lifeblood of our public system,” Aviles said. “It would be virtually impossible to sustain our mission and all of our public hospitals … without it.”

The HHC has already run up a $1-billion deficit covering the tabs of patients who can’t afford care. Serrano said the recent financial struggles of St. Vincent’s Hospital, which is near bankruptcy, proves established hospitals can be brought to the brink of collapse.

“I hope that doesn’t happen to this hospital,” she said. “I’m not sure what would happen if Bellevue goes away.”