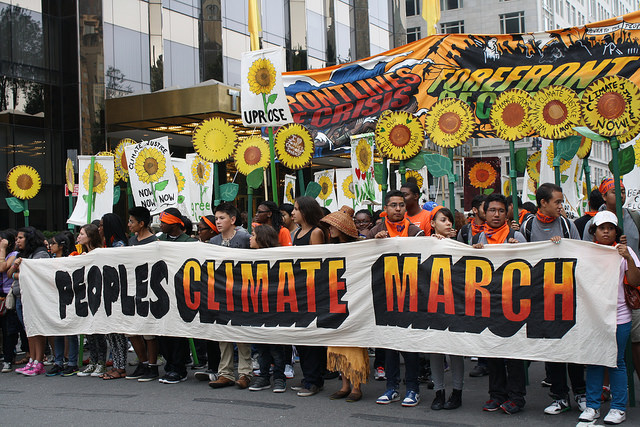 A group of young children proclaiming their hopes at the People’s Climate March on Sunday, September 21. Photo credit: Stacey Kilpatrick

Protesters of the People’s Climate March wanted their voices heard. They shouted, chanted, screamed, marched, danced and held up signs voicing their opinions. Some read: “Angry Pacifist.” “No to dirty energy! Stop the climate crisis!” “Climate change is a health crisis.” “Our power.” “Keep the oil in the ground.” “Our home flooded in Irene & Sandy.” “We can build the future.” “Respect your mother earth.”

Amy Sholtis, 47, a biology teacher at Plattsburgh High School in Plattsburgh, N.Y., said time has run out. She is worried about our sinking cities. 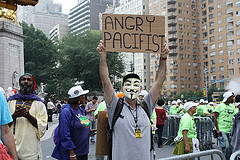 “We don’t have time because Miami is sinking, New Orleans is sinking, we’re going to have more storms and we’re not prepared,” Sholtis said. “We have no policy and it’s going to cost more money in the long run to ignore this and not to mention all the other problems that go with this climate change.”

Sholtis is also worried about last winter’s “polar vortex” in which many parts of the country felt bitterly cold temperatures that hadn’t been seen for decades and that the government doesn’t have a plan.

“People sometimes don’t put together the fact that we had a bad winter because of climate change, that there’s a drought out west and there’s climate change,” she said. “I think it would help if our government would acknowledge it and then we’d start having a climate policy.”

Today’s march was held two days prior to when President Obama and other world leaders are slated to attend a Climate Summit at the United Nations hosted by Secretary General Ban Ki-moon. The meeting is supposed to bring attention to climate changes, including a new global climate treaty that will be finalized in Paris in 2015.

But 2015 is a long ways away for the people who were demanding change on the streets today.

“We need our leaders to take action and no longer just use words,” said Kimelman. “The time has passed for words and we want to see an end to the All-of-the-Above energy policy in this country and a move towards 100% renewable energy.”

Lidy Nacpil, 54, from the Philippines, also marched in hope that leaders will hear the pounding of footsteps on the pavement. She said she feels that the Philippines is one of the most vulnerable countries to climate change.

“We are now experiencing increasing numbers and magnitudes of super-typhoons and it is taking thousands of lives and destroying millions of homes,” Nacpil said. “This is a very urgent issue for us.”

Nacpil added that she wishes people everywhere build movements to address the climate crisis to compel world leaders to fulfill their obligations to citizens. One immediate act that she hopes the government will take is to stop the further expansion of the fossil fuel industry.

Katie Robbins, 33, Executive Director at the Physicians for a National Health Program New York Metro Chapter (PNHP-NY Metro), said that she, too, wants to send a strong message to the UN that they need to move.

“I’m so excited that we have so many groups coming together,” said Robbins, a Manhattan resident. “Over 1,000 groups have endorsed and so many people are really standing up to say, the fancy [rhetoric] is over, we need real action now.” 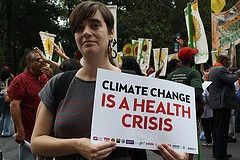 In addition to marching with the PNHP-NY Metro, Robbins was also with the Physicians for Social Responsibility (PSR), attempting to highlight the connection between climate change and people’s health. Robbins said that heat-related illnesses, asthma, and extreme weather, such as what Hurricane Sandy brought, can bring on stress-related illness and health issues.

Robbins is also eight months pregnant with her first child.

“[I’m] thinking a lot about the kind of world that she’ll be growing up in and we need serious climate action now so this world is safe and healthy for children,” she said. “This isn’t just about polar bears. This is about our health and our lives and so in order to make sure that we keep thriving here on our planet we need to find action now.

[…] Published alongside article by  Stacey Kilpatrick in Pavement Pieces […]