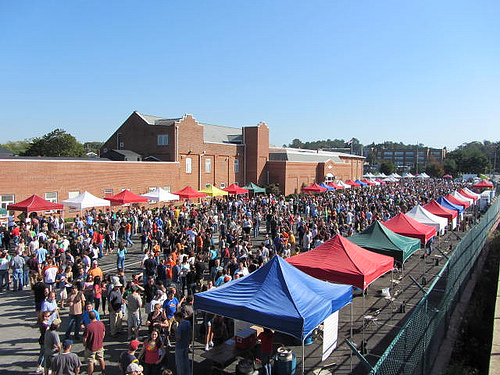 More than 3,000 people attended the 2011 Kennett Brewfest in Kennett Square, Pa., sampling beers from upwards of 60 breweries from across the country. Photo by Chris Palmer

Cathy McKnelly is an affable 61-year-old grandmother and former high school teacher. She lives in Landenburg, Pa, a small town in a rural part of Chester County. She’s not someone you might expect to meet at a beer festival.

But this afternoon, she proudly joined her children and friends at the 14th annual Kennett Brewfest in Kennett Square, Pa. enjoying a day full of family, food, music and, of course, beer.

“This is really neat,” said McKnelly, grasping onto the two-ounce mug given to each of the nearly 3,000 guests who attended the festival. “We got our family here, it’s a great day, and this is just a lot of fun.”

The McKnelly’s used the festival as a reunion event. Cathy’s children, who have moved to various parts of the country as they’ve grown up, flew in for the weekend, and this afternoon they all donned matching tee-shirts with drawings of a ham on the front, dubbing themselves “Team Hambone,” an inside family joke.

Jeff Norman, the executive director of Kennet Brewfest, created the event 14 years ago as a way to raise funds to support the town of Kennett Square, and said that the profits from the event bring in about a third of the revenues needed to stage parades, summer concerts and other community events.

“This event is really important for us and the town,” he said.

Cathy’s son Tim, who is 34 and lives in Huntsville, Ala., said the festival was a perfect event for the family to enjoy together.

“We’re just here having a good time,” he said. “It’s a nice homecoming event for us.”

“This is a neighborhood thing,” said Steve Healey, 55, from Downingtown, Pa.

Healey has attended the brewfest for the past two years with his poker buddies, and he was quick to emphasize that getting drunk was not the main point of the event.

“It’s just a nice time being with friends, tasting different beers,” he said.

He told a story about how he tried an ale from the Magic Hat brewery last year that he really liked, and it has since become one of his go-to beers. If he was concentrating on the quantity of drinks he consumed rather than quality, he might have never made that discovery.

“If you’re too drunk, you can’t even taste anything,” he said.

“People are definitely here for the flavor of the beer, the joy of beer, rather than the inebriation,” said Mike Hiller, the head of Bavarian Barbarian, a brewery from Williamsport, Pa. that was distributing beer at the festival.

Hiller attends about 12 festivals per year, and though this was his first time attending the Kennett Brewfest, he noted that this crowd was different from other festivals he’s visited.

“There’s a more knowledgeable crowd here,” he said. “It’s not a total drunk-fest.”

But some people misunderstand the event said Gina Goodall, 58, who works with the town and helped out at the festival.

“The idea of thousands of people drinking beer in your town sometimes is not what you want,” she said.

Ben Thackara, 32, of Oxford, Pa, said he saw a girl getting sick earlier in the day, and as the event drew into the evening, there were several visitors stumbling around with stickers on their foreheads and waning memories.

“I don’t really remember what they had,” said Kit Murdock, 59, of Downingtown, Pa, when asked which beer he had just finished.

But overall, visitors were consistent in their praise for the community-oriented feel of the afternoon.

“I love it,” said Dennis Meixell, 63, who drove up from Newark, Del., with his adult children for the afternoon. “The people have been really nice.”

And McKnelly said if they can manage to get everyone together again, her family will have another reunion at Brewfest 2012.