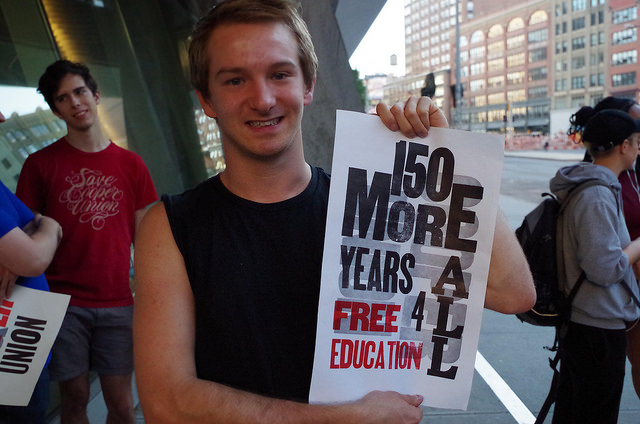 Cooper Union Alum Casey Gollan, 24 holds up protest sign. Gollan is part of Free Cooper Union, a student organization that participated in several on-campus protests in 2012 and 2013. He was at the rally yesterday to celebrate the anticipated legal settlement that will restructure Cooper Union’s financial governance. Photo by Dale Isip.

Students, alumni, and politicians stood united outside of 41 Cooper Square yesterday to celebrate an anticipated settlement that will put Cooper Union on the path back to free tuition.

Members of the Committee to Save Cooper Union (CSCU), along with New York State Senator Brad Hoylman, spoke to the public about their years-long effort in gaining an anticipated state settlement that would change the way the privately funded college would continue to function financially.

A group of about 40 cheering students and alumni held signs reading “Community Saves Cooper Union” and “150 More Years Free Education 4 All” as feelings of relief, hugs, and smiles abounded.

“There were things that we needed to do get [the school] back to a healthy state, but we were unable to because of the people in power at the time,” Curro said. “But now with this consent agreement, we have some kind of governance structure in place.”

“We’re all part of Cooper, and we all fight for the vision of what we want this school to be,” she said. “Tuition-free [education] is a big part of that.” 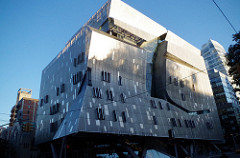 The rally/celebration of a settlement that would put Cooper Union on the path to free tuition was held at 41 Cooper Square, yesterday. Photo by Dale Isip.

The college had come into financial trouble in 2011, when moves made by then president Jamshed Bharucha, indicated that the school could not sustain its tuition free status. That status indeed came to an end in the fall of 2014 – with some students set to pay roughly $20,000 a year – but not after several student protests, rallies, and sit-ins, on the part of Free Cooper Union (a student organization) and the CSCU.
Tuition scholarships currently remain at half rate: $20,400 per year, or $10,200 per semester. This means students still have to pay tuition as of now. The restructuring settlement is expected to be signed by State Supreme Court Judge Nancy Bannon on Sept. 14.

Alumni Casey Gollan, 24, who was present at the celebration. He described current student efforts for the college.

“As alumni and students, we’re doing a community residency in the old St. Marks Bookstore, and we’re trying to make sure that the agreement is held up,” Gollan said. “There’s a lot of loopholes in any agreement, it’s a negotiation, so we all have to rally behind it.”
Resident advisor, Alfred Roosevelt W. III, 19, also spoke about the students’ continued involvement in the settlement process.

“Half the kids there right now, holding up those signs, those are all freshmen, they’re the most involved,” he said. “My year, I’m a sophomore, we were the vanguard. They’re the vanguard right now.”
Student passion about the colleges’ financial problems seemed to span generations.

Nils Anderson, a 1994 graduate, had been intermittently involved as an alumnus. When he heard of the tuition being implemented last year, he had a clear reaction.

“I was very troubled by that … I became an educator when I was here.” he said. “And the path I took after that, of teaching and making public art … [this school] shaped my life, basically.”