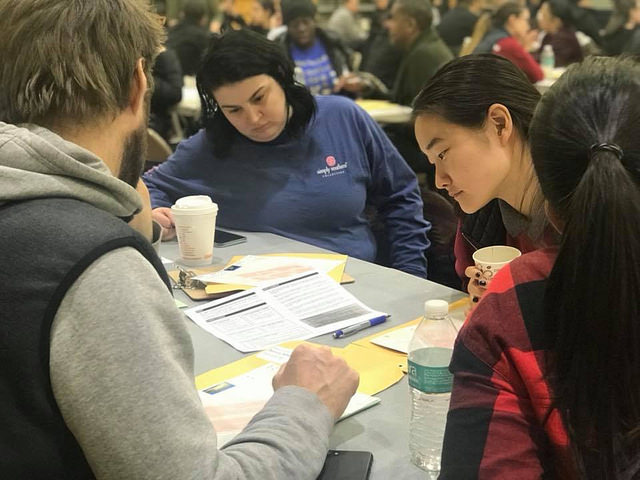 Volunteers were split into groups of three to five individuals. They received training on how to approach individuals they encountered in their survey area before heading out for the night. Photo by Kristen Torres.

More than 4,000 volunteers took to the streets last night to tally up the city’s homeless population.

They were taking part in a yearly count dubbed the Homeless Outreach Population Estimate (HOPE), which is made mandatory by the U.S. Department of Housing and Urban Development.

Volunteers gathered at over 20 sites across the city’s five boroughs last night to receive training before canvassing their assigned blocks. Around 100 of them crammed into the cafeteria of a public school in Manhattan’s Murray Hill neighborhood at 10 p.m.

“You have come out of your homes to help people who don’t have a home to go to tonight,” said Deputy Mayor for Health and Human Services Heminia Palacio. “You’ve come out to give all of us New Yorkers the hope that we can help our neighbors — and that we can continue to bring people in off the streets.”

Volunteers milled in and out of the cafeteria, eating donuts and filling out paperwork. Sitting at plastic tables in their groups for the night, team captains led discussions on how the night would go.

In groups of three to five people, HOPE volunteers are assigned a certain amount of blocks to canvass in one of the city’s five boroughs. They spend roughly four hours — from midnight to 4 a.m. — asking everyone they encounter if they have a place to sleep that night.

Jesse Shiffman-Ackerman volunteered for this year’s count. It was his seventh year participating.

“We live in New York City, and, I mean, I’ve been here my whole life and seen homeless people all around me,” Shiffman-Ackerman said. “They need real help. That’s why I keep coming back.”

“There’s always plenty of people to talk to,” he said. “And with a cup a coffee and enough people around to question, it’s pretty easy to keep up the motivation over the course of four hours.”

As a result of last year’s count, 1,500 New Yorkers were taken off the streets and remain off the streets, according to Department of Social Services Commissioner Steven Banks.

“In the past, the surveys focus was on bringing someone out of the cold for a night,” Banks said. “But we’ve shifted our goals and now we’re looking for long-term solutions for these people to keep them off the street permanently.”

There are currently 2,000 known unsheltered individuals on the city’s by-name list, which keeps track of homeless individuals as they transition off the streets, according to Banks.

“The survey enables us to know where people are and that helps us engage them and bring them off the streets,” Banks said. “It can take anywhere from one to five months to find someone permanent housing, and this survey helps us make sure we’re not missing anyone.”

Banks said the nationwide survey also gives insight into the forces driving homelessness in the city.

“In this city, rents went up almost 19 percent last year, while income went up less than 5 percent,” Banks said. “That’s obviously driving homelessness in our city. We have to pay attention to those indicators.”