Crumbling East Village Projects: Many tenants say they wait a year for repairs 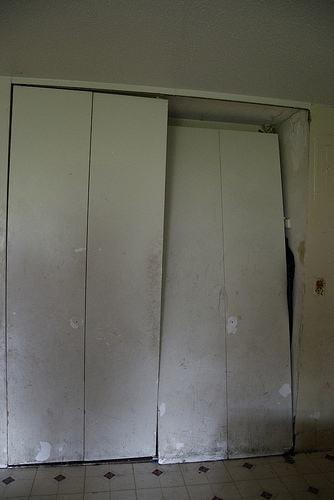 In addition to visiting dozens of apartments, reporters combed through hundreds of Department of Building and Environmental Control Board records; examined dozens of court cases; and consulted legal aid, community leaders, advocacy groups and elected officials.

More on this project in the New York Daily News, which includes video produced by Reinhard Cate

Betty Buck, 67, a 43-year resident of Wald Houses, was at home sleeping on Aug. 30 when her kitchen cabinets came crashing down. NYCHA workers came to inspect the damage, but all they did was move the cabinet unit into her hallway — blocking the already-narrow space. She was given a repair appointment of February 2011 — almost 6 months after the damage occurred.
But that’s not the only issue Buck faces. She also has holes in her walls and ceiling, and peeling paint, from water damage; mold in her bathroom; and a roach infestation, despite an otherwise clean and well-kempt apartment. 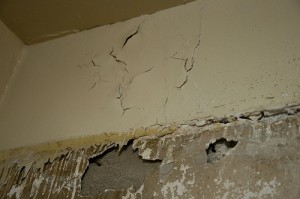 Nilda Gomez, a tenant in Riis Houses, also faces many disrepair issues. The worst offense happened during the summer, when NYCHA workers came to repair her heating system. They disconnected her steam pipes and left them that way for months, jutting diagonally across her bedroom.

In the process of fixing a broken pipe in Gomez’s bathroom, workers instead wrapped a blanket secured with tape around the busted pipe. Other pipes throughout her apartment have been patched with duct tape. 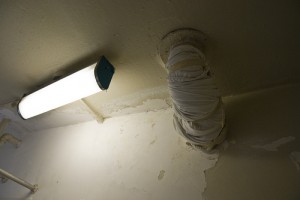 A blanket is taped on to a busted pipe in Nilda Gomez's apartment. (Photo by Rachel Wise)

Also in Gomez’s apartment are holes in the ceiling and walls; mold in the bathroom; broken tiles and moldings; broken windows and closet doors; and a lock on her apartment door that only opens from the inside.

After years of assigning housing assistant receptionists at individual properties to deal with tenants’ requests for repairs, NYCHA in 2005 began to introduce the Centralized Call Center, a hotline tenants can call to schedule routine repairs during regular business hours or to report emergencies 24 hours a day.

According to General Manager of Operation Michael Kelly, “NYCHA proposed the creation of a centralized call center, aimed at improving service delivery to residents, standardizing data entry for (work tickets) and scheduling appointments.” Kelly spoke at an Oct. 26 public hearing on housing.

But, from residents’ points of view, the call center has been a huge failure.

At the start of this investigation, reporters requested a series of documents from NYCHA under the Freedom of Information law. The authority responded saying it had “possibly 140,000 documents” of call center data in the past three years for East Village developments alone. However, NYCHA said it would charge for staff time to gather the documents in addition to 25 cents per page. NYCHA failed to provide a detailed index of the documents — as required under the FOI law — and has yet to produce any of the documents requested, despite months of negotiations with reporters.

Because no documents have been made available, the average time residents wait for repairs is unclear. But, according to residents, the average wait time is at least one year — and often as long as two or three years.

“NYCHA understands and respects our residents’ frustration over the current backlog of repair and maintenance work. No one wants to resolve this problem more than NYCHA,” Kelly said at the Oct. 26 public hearing.

No one denies the fact that the New York City Housing Authority is strapped for cash. The city agency has a growing deficit that it worsened by its lack of federal funding and increasing demand for repairs.

“In 2005, NYCHA’s comprehensive physical needs assessment identified a 5-year $7.5 billion need to fully address the repair and maintenance across the authority,” Kelly said at the hearing. “Currently NYCHA only has $1.5 billion to address such repairs.”
Victor Bach, senior housing policy analyst for the Community Service Society, has spent a great deal of time looking into NYCHA’s budget and meeting with officials to come up with solutions.

“When you have a $7 billion backlog in capital need that can’t or won’t be addressed by Washington, what ultimately happens is that your deterioration accelerates and your repair needs begin to escalate,” Bach said. “The needs are growing at the same time the centralized call center is experiencing problems responding. It’s a combination.”

Assemblyman Vito Lopez, who chairs the New York State Assembly’s committee on housing, led the public hearing on Oct. 26. Lopez acknowledged the funding problem but insisted it wasn’t the only trouble the authority has.

“We realize it’s a funding problem, but as a few people have mentioned, it’s also an operational problem,” Lopez said.
While NYCHA admits the backlog of repairs is an issue, the agency has yet to provide data that shows the number of unfulfilled work orders.

Toni Footman, an 18-year resident of Lillian Wald Houses, grew so tired of waiting for repairs to be made, she took NYCHA to court on Sept. 14. 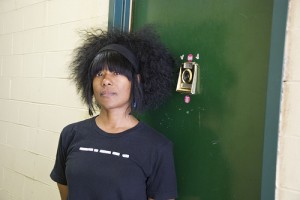 The judge ruled that NYCHA had to fulfill Footman’s maintenance request — fix leaks, exterminate for roaches, plaster and paint walls damaged by leaks — within 30 days.

More than two months after the court ruling, NYCHA has yet to make any repairs in Footman’s apartment.

Tenants from all East Village developments tell similar stories: They’ve been waiting years upon years for NYCHA to fix damages in their apartments. This can take a toll on residents, especially on the elderly and disabled.

Residents from Meltzer Tower, an all-senior development in the East Village, worry about their health in the winter months. They say NYCHA turns the heat off in their building between 10 p.m. and 6 a.m., a complaint echoed by tenants in several other East Village developments.

“Some of the residents here are incredibly ill,” said Sara Augustin, 65. “We’re older, you know? The cold goes straight to our bones.”

Augustin, who has rallied her neighbors and garnered 30 signatures for a petition demanding the heat be left on at night, recorded whom she claims to be a NYCHA official explaining their heat policy.

In the recording, the man tells Augustin that NYCHA will only turn the heat on at night if it is below 20 degrees outside — which is 20 degrees colder than what’s required by the New York City Housing Maintenance Code. The law requires building owners to provide heat between 10 p.m. and 6 a.m. if the temperature outside is below 40 degrees — and if it’s below 55 degrees between 6 a.m. and 10 p.m.

In an e-mail response from NYCHA’s press office, NYCHA maintained it does follow the Housing Maintenance Code.

However, according to the Department of Housing Preservation & Development, who enforces the City Housing Maintenance Code, NYCHA is not held to these same standards.

“HPD does not have jurisdiction or the responsibility of enforcing the Housing Maintenance Code in NYCHA properties,” HPD spokesman Eric Bederman wrote in an e-mail.

Another issue that negatively affects elderly and disabled tenants is the frequent elevator breakdowns in NYCHA buildings.

NYCHA owns more than 60 buildings in the East Village, which are divided into eight developments. According to the Department of Buildings, NYCHA has accrued 741 building violations, some which date back as far as 1972; 275 of these are listed as “open” or “active,” meaning the DOB has no record of these violations being addressed.

More than 152 of them are Environmental Control Board violations — the most serious kind. A total of 20 of these serious infractions remain “open.”

The majority of the violations issued to NYCHA are because of poor exterior wall conditions, and shoddy elevator and boiler maintenance. Most are not considered hazardous to residents, according to the DOB, but they are considered major violations.
As for elevators, specifically, the DOB says NYCHA developments in the East Village alone have been hit with more than 60 building violations for failing to maintain elevators.

According to documents from the DOB, NYCHA has taken anywhere from two months to seven years to address elevator problems. Tenants say they are often forced to walk up and down flights of stairs because their building’s elevator is out of service — and disabled and wheelchair-bound residents say they’ve been trapped for days on end waiting for elevator repairs.

Of these 60 elevator-related infractions, the DOB says, 12 are still “open,” meaning the DOB has not received a certificate indicating the problems have been fixed.

In addition to quality-of-life problems tenants face, many are also up against health concerns they believe are linked to dilemmas involving disrepair. Many residents — young and old alike — worry poor housing conditions have caused or worsened respiratory problems such as asthma.

Frequent asthma attacks have been linked to the presence of moisture, mildew and cockroach allergens in homes, according to a recent study published in the Journal of Urban Health. The presence of allergens that cause asthma may be more common in housing that is in old or in a state of disrepair, the study said. Common symptoms of deteriorating housing are “water leaks, holes that pests can pass through, poor ventilation and peeling paint.” 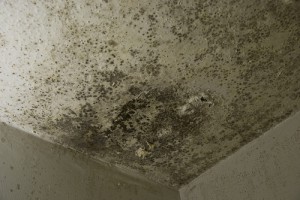 Residents from every East Village development cited all of these as problems NYCHA failed to repair. Mold growth from water leaks was the most apparent — and severe — in all apartments where residents suffered from asthma.

Although NYCHA has failed to provide specific documents on health concerns related to poor housing conditions — such as mold, asbestos, gas leaks and paint — the authority said it had between 30,000 and 35,000 such documents for East Village developments alone.

Toni Footman and her children, for instance, have experienced breathing problems, which she believes are exacerbated by the presence of mold, cockroaches and extensive water damage throughout her apartment.

“Lately my chest been really bothering me,” she said. “I’m really a healthy person. I’m a vegan; I work out. And it’s only when I’m inside of my home that I feel like I can’t breathe.”

Her children’s doctor has diagnosed one of her two sons with asthma; the other, they believe, is allergic to cockroach allergens.
“(My) little one is nine, and he’s been having more breakouts because the mold is in the bathroom,” she said. “He’s inhaling that. He’s been scratching; his fingers all broke out.”

What frustrates Footman even more about this situation is NYCHA’s lack of response, despite the September ruling in housing court.

Footman has been actively searching for another place to live, which is no small task, considering she only pays $245 in rent every month.

“I’ve been filling out applications now to try to move,” she said. “If I do happen to find something, I can move out of here because it’s disgusting.”