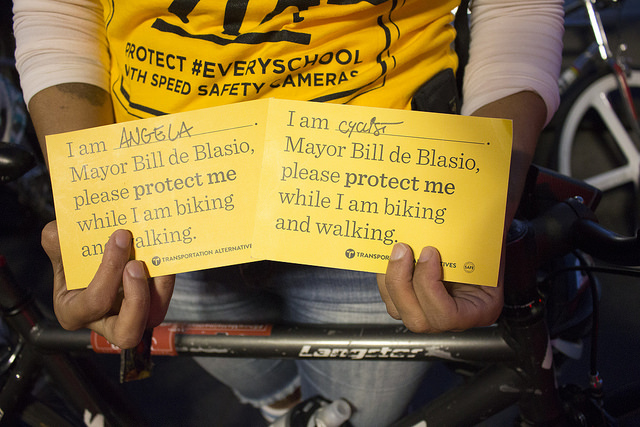 Notes that participants filled out addressed to Mayor de Blasio asked for protection while biking or walking on the streets that were to be mailed to him. Photo by Brelaun Douglas.

On Thursday evening, as the sun set and the air cooled in signs of fall, a horde of yellow invaded downtown Manhattan.

Beginning at E 59th Street and Fifth Avenue, hundreds of bicyclists decked in yellow flowers and safety vest rode from Fifth Avenue to Washington Square Park in a protest demanding not only safe passage for cyclists and pedestrians, but also that New York Mayor Bill de Blasio take immediate action on Vision Zero and invest in fixing dangerous streets in the city.

Seventeen cyclists have been killed this year, which is more than the last year total of 15.

In 2014, the mayor’s office and various city agencies released the Vision Zero Action Plan, an outline of 63 initiatives that they would initiate to diminish the amount of deaths and serious injuries on the streets of New York. Since its inception, 58 new initiatives have been added including installing speed cameras at 20 new locations and installing 250 speed humps.

But for 46-year-old Andreas Turanski, the plan is not doing enough.

“I was telling someone what Vision Zero meant because they had no idea, so obviously the message isn’t getting out,” he said. “They’re not policing enough.”

Though he forgot his bike at home, Turanski wouldn’t let that deter him from joining the protest and rented a Citi Bike to participate with.

“I have two bikes at home, I forgot to bring one, but I really want to be a part of this because I care,” said the software developer who lives on the Upper West Side. “My son’s 14 and he walks on the streets too and also rides on them, as do I and so does everyone else. I wanted to be a part of this so I grabbed one down in the Financial District where I work and biked up here.” 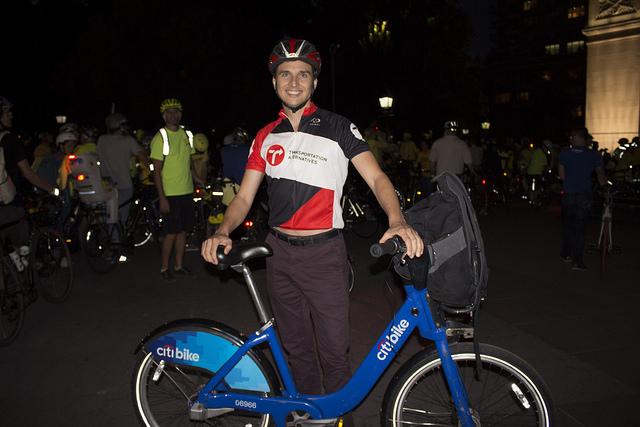 Despite forgetting his bike at home, 46-year-old Andreas Turanski was determined to join the protest for safer streets for bicyclists and pedestrians and rented a Citi Bike to be able to join. Photo by Brelaun Douglas.

Riding his bike about 20 times a week, Turanski really hoped that the event would put pressure onto the issue of pedestrians and bicyclists killed by motorists.

“I would like to get real policing so that people who drive are aware that if they speed, if they turn aggressively, they will get a ticket and they will stop doing it,” he said.

Amirl Hamer, 49, is an activist with Transportation Alternative, one of the groups responsible for putting on the protest, also wanted to see a change in the safety of the streets for all.

“We’re fighting for safe streets, whether you’re a cyclists, a pedestrian, you’re in a wheelchair or whatever form of transportation you take besides cars,” she said. “We’re working on having safe streets.”

Angela Azzolino, of Sunset Park in Brooklyn runs an organization called Get Women Cycling, geared towards encouraging women to ride their bikes, and wanted to see a safer environment for that to happen.

“The number one reason in all my conversations with women is that they’re afraid to ride their bikes because they’re afraid of being hit by a car,” she said. “That’s a pity because it shouldn’t prevent you from a healthier lifestyle, so we’re doing everything we can to get safer streets for everybody.”

Adam Johnson,43, a lawyer from Hell’s Kitchen, also came out to show his support in the cause and hoped that real changes would occur.

“This year there have been twice the number of deaths to this point in the year than there have been in past years despite the mayor’s lip service to Vision Zero,” he said, sitting on his bicycle while still decked out in suit pants and a button up shirt. “We need better enforcement of traffic laws by NYPD, we need enforcement of speed limits for cars, we need better infrastructure in support in terms of protected bike lanes where appropriate and better street architecture. That’s why I’m here. That’s why all of us are here and we hope New York pays attention.”