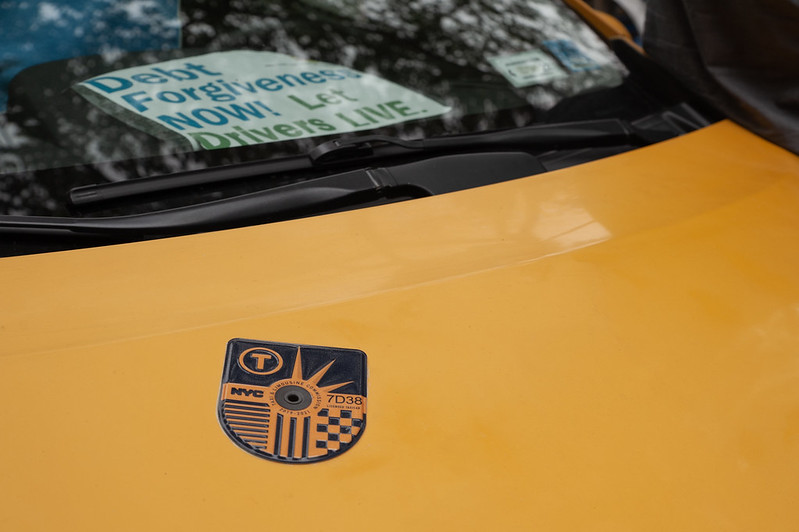 A medallion on a typical yellow new york city cab parked in front of City Hall as taxi drivers are protesting for debt relief. Photo by Nikol Mudrová

“We’re not gonna give up until we break.”

Those are just some of the messages cab drivers chanted on the street near one of the entrances to the City Hall subway station.

“We just want to pay off our debt while being able to pay for rent and actually make money for ourselves,” said. Jean Francois, 68, who has been driving taxis since 1984. He came to the US. from Haiti and is currently living in Queens. 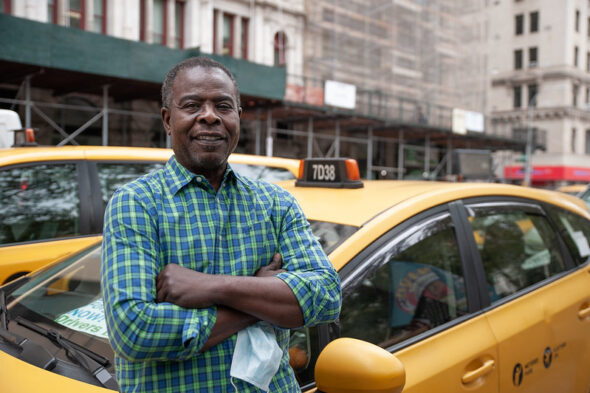 Jean Francois, 68, immigrant from Haiti. He bought the medallion in 1984 and now protests for in front of the City Hall for higher debt relief. Francois owes about $600,000 and pays $2,300 monthly. Photo by Nikol Mudrová

The now approved plan promises $1,500 or less monthly installment on driver’s mortgages for medallions. But according to the New York Taxi Workers Alliance (NYTWA), it is not enough. They want to reduce it to a maximum of $800 per month.

“It would be still hard, but manageable for me to pay,” Francois said. “It is much better than the $2,300 I must pay now. I would be less stressed.”

To own an own cab, drivers must buy a medallion from the city or the secondary market. It works basically as a permit to drive the yellow cab, and the purchase of medallion was considered an asset for securing a comfortable retirement. It was even promoted by city officials.

“They were telling us the prices for medallions would go up and that it is a good investment,” Md Z Islam, 43, another protesting taxi driver said. He is originally from Bangladesh and bought the medallion 11 years ago. 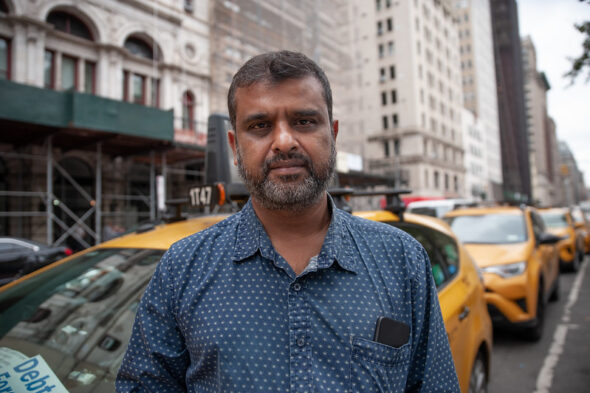 Md Z Islam, 43, immigrant from Bangladesh. He bought the medallion 11 years ago and now protests for in front of the City Hall for higher debt relief as he owes about $800,000 and pays $4000 monthly. Photo by Nikol Mudrová

“City officials with former mayor Bloomberg even ran TV ads with the message that it is once in a lifetime opportunity,” he said. “I trusted them.

Taxi drivers borrowed money for the medallion even though they were not eligible for loans, showed a 2019 NY Times investigation. Reporter Brian Rosenthal likened the situation to causes of the housing bubble, which burst in the global financial crisis in 2009.

And the loans were not the only problem. Uber, Lyft, and other ride-sharing apps came to the city and took some of the customers from yellow cab drivers, which drastically decreased the market value for medallions. From more than $1 million in 2014, the value of medallion is worth less than $200,000 as of 2018.

Now, owners of medallions owe $600,000 on average according to NYTWA data.

“They (ride-sharing apps) have more cars than us, their fare is always changing according to market demand, and they didn’t have to buy any medallion”,” said Wain Chin, a taxi driver from Myanmar, who moved to New York 30 years ago. “Now, we have fewer customers and therefore less money.” 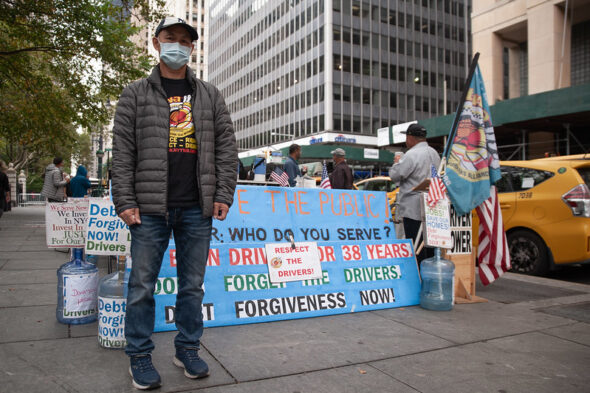 Wain Chin, 54, immigrant from Myanmar, who has been driving yellow cab for 20 years now. He protests for in front of the City Hall for higher debt relief as he owes for his medallion about $500,000 and pays $2300 monthly. Photo by Nikol Mudrová

He suggested that the city should level the playing field and regulate ride-sharing apps in the same way it regulates yellow cabs.

Another common slogan was “No more suicides” as several  cab drivers committed suicide  because of the debt.

“You work hard, you try to make money to pay bills, but the money is simply not there for you to make,” said Francois.

But despite the hardship, he had a smile remained on his face.

“I’d say that people from Haiti like me are more resistant,” he said. “And the situation can always be worse.”

Some politicians and city officials stopped by to show their support, said Chin.

“But de Blasio is the one who has to do something,” he said.

BREAKING: A dozen members of the NYC congressional delegation have written to @NYCMayor, urging him to halt the city’s banker bailout & adopt NYTWA’s proposal for relief debt relief.

Their letter was first reported by @erinmdurkin of @politicony, and you can read it right here: pic.twitter.com/rQsgBAx2k9

This is in support of  one of the demands of NYTWA. The union says it  would make it easier for taxi drivers to, for example, rent an apartment. Now, they might get rejected because of their debt and low credit score.

“If the city doesn’t accept our proposal for debt relief, we all will be homeless, and a lot of us will be forced to go bankrupt,” Francois said.

But Islam worries he does not even have a choice to file a bankruptcy.

“I have two kids, and if I file it, I wouldn’t be able to be a guarantor for their loans if they want to go to college,” he said.

Not all the Taxi and Limousine commissioners who voted for the mayor’s relief plan on Wednesday  agreed with it.

“Is it enough? No, it is not enough,” one of the commisioners, Lauvienska Polanco  told amNY. “I voted yes because I feel there’s immediate relief. The uncertainty in waiting for something better will add more despair to the medallion owner who is in desperate need today.”

The Mayor’s office did not respond to requests for comment.