Diverse books are lacking in the NYC elementary curriculum 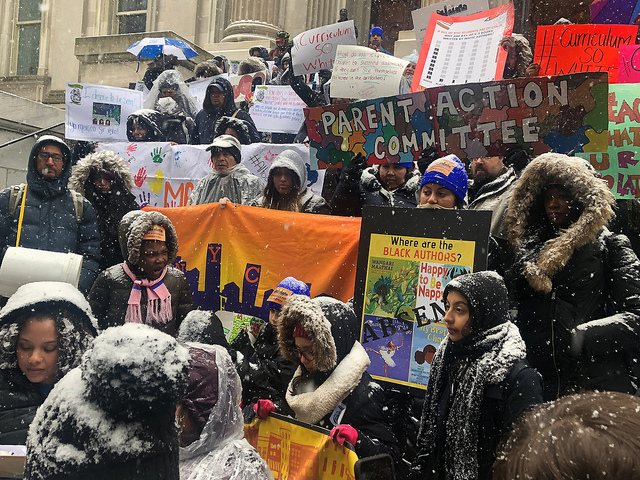 Parents and students on the steps of the Tweed Courthouse, which houses the city’s Department of Education, voicing their displeasure with the lack of diversity in the elementary curriculum. Photo by Levar Alonzo.

Kadija Kone,  still remembers the first time she read a book with a main character that looked like her. She had to read the book for her third grade class. The girl in the book from the reading had the same curly hair and dark skin.

Kone, 17,  of Queens, said she was teased by her classmates for resembling the girl. Her class made up black and latino kids found it strange to have a black character as the focus. But Kadija felt a sense of pride, familiarity and confidence that someone in her school book looked like her.

“We need to see characters that represent us because it is empowering,” said Kone, who is also a youth leader at the advocacy group, IntegrateNYC, that fights for integration and equity in city schools. “We need to know that we are beautiful and can go on to achieve anything we put our minds too. If I want to be a scientist, I want to read about a scientist that looks like me.”

According to a report by the Coalition for Educational Justice (CEJ) blacks and hispanics make up more than two-thirds of the public school enrollment but authors and characters that represent this majority are mostly absent from the elementary school reading list.

Parents and the CEJ are calling on the Department of Education to adopt a more culturally responsive curriculum city-wide. They want books to reflect students of color because they believe this form of positive reinforcement will lead to more success in their respective communities.

According to the CEJ report, about 84 percent of the authors used in elementary schools are white.

“It is not right that our books and curriculum do not reflect the most diverse city in the country,” said Natasha Capers, CEJ Coordinator, and mother of two elementary aged kids. “It’s not right that our kids can go through the system and not read about people that represent them until they chose to or are in college.”

The CEJ report goes on to show that 10 optional reading lists widely used in city schools are dominated by white authors and characters – 118 titles feature white authors and about 22 books are written by nonwhites.

In February, this frustration with the lack of a culturally representative curriculum boiled over, resulting in parents, students and the CEJ protesting on the steps of the Tweed Court in Lower Manhattan, which is the home of the DOE.

Adofo Muhammad, principal at Bedford Academy High School in Brooklyn said that parents and students shouldn’t be the ones protesting. He said teachers should recognize what will engage their students and lobby for the DOE to diversify the curriculum.

“It’s our job as educators to demand that we have culturally representative works for our students, everyone has to be included,” he said. “We are molding the minds of our future generations.”

He added that when students of color see themselves positively represented it breaks down years of mythology that their superstardom is only reached by sports or music.

“It’s all about positive reinforcement to students to allow them to dream bigger than they ever could,” said Muhammad. “No matter what happens to children in life we should always give kids the best tools to be the best them.”

Schools Chancellor Richard Carranza since being appointed has expressed support for a more diverse reading list and the DOE has noted that the city has set aside $23 million for anti-bias and culturally responsive training for school staffers.

“Our students should see themselves in the books they read and the lessons they’re taught,” said Danielle Filson, spokeswoman for the DOE in a released statement. “We’re prioritizing a culturally responsive curriculum that includes a diverse range of voices.”

The DOE did not respond to emails asking how or when they plan to make the curriculum more culturally responsive.

Kiesha Griffin has a child enrolled in a District 9 elementary school in the Bronx. She wants her child and students of color throughout New York City to know of where they come from. She said that direct representation opens up their imaginations and keeps students engaged.

“It engages them, they pay attention,” said Griffin. “We have had enough of teaching our kids about Europe and how they colonized the world. Stop whitewashing our history to our kids.”

The CEJ and parents want the DOE to start culturally responsive curriculums by this summer. They also request that the DOE stop working with textbook and publishing companies that refuse to diversify learning materials.

Very interesting and well written. I do agree that diversity is definitely necessary