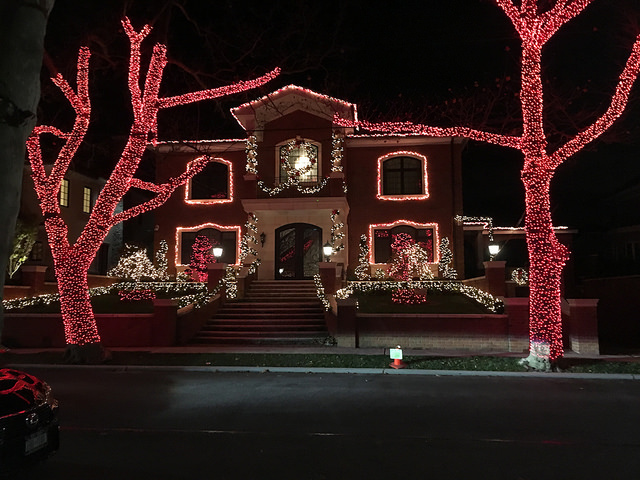 Angelo Branciforte’s home in Dyker Heights was decorated by B & R Christmas Decorators for $5500. Photo by Jennifer Cohen

Dyker Heights by Jennifer Cohen from Pavement Pieces on Vimeo.

The Christmas lights in Dyker Heights, Brooklyn, are as bright as Times Square without the billboards.

“I love taking people to see these lights, everybody’s happy and they become a kid again,” said Angela Christianson, Tour Guide for A Slice of Brooklyn Bus Tours, which charges $50 for a tour of the spectacle.

The predominantly Italian-American neighborhood has become a mainstream holiday tourist attraction with thousands treking from Manhattan to Brooklyn each year to see a handful of houses that spend thousands on Christmas decorations. Front lawns are covered in decorations from a 15-foot tall Santa, to carousels, to snowmen, angels, toy soldiers, reindeer, and hundreds of lights in green, red, and white.

“We joke around Rockefeller Center? FUHGETTABOUDIT, but when you come here to Brooklyn you’re seeing what homeowners are doing whether they are doing it themselves or getting companies to pay,” said Tony Muia owner of A Slice of Brooklyn Bus Tours. “Its sort of like a different feeling than being rushed on those sidewalks of Manhattan to see something Christmas related whether it’s the windows or the tree.”

Many homes participate in the neighborhood Christmas decorating tradition, but some take it over the top.

The Karounos home sits on 84th Street between 11th and 12th Avenue in the heart of the neighborhood. Their two family home is decorated with a blow up Santa, nativity scene, and the words Merry Christmas written in green and red. The family has been living in the neighborhood for seven years. They had different decorations two years ago that fell apart, so they switched it up by adding the inflatable decorations.

“It’s always been going on and my Dad and us eventually did it too,” said Elias Karounos, 13. “We love it, we help decorate, and it’s really fun. Everyone comes down the block and it’s all happy.”

Two doors down from the Karounos’ lives the woman who is believed to have started the whole tradition in the area, Lucy Spata. During the tour Christianson, told the story of Spata and how she moved to Dyker Heights in 1986 and began her Christmas tradition by putting up 40 angels in honor of her mother.

Christianson said many neighbors complained about Spata’s bright decorations and wanted her to take them down, but she would just say to them, ‘If you don’t like them well then move.”

No one moved and Spata, in spite, began putting up even more decorations, Christianson said. Eventually more neighbors started putting up decorations and created competition.

Today Spata’s home is completely covered, head to toe with Santa’s, angels, bright colored lights, toy soldiers, and snowmen. It is so bright it takes a minute for onlooker’s eyes to adjust. There is a gentleman’s agreement and the lights go off at 1 a.m. so neighbors can sleep. 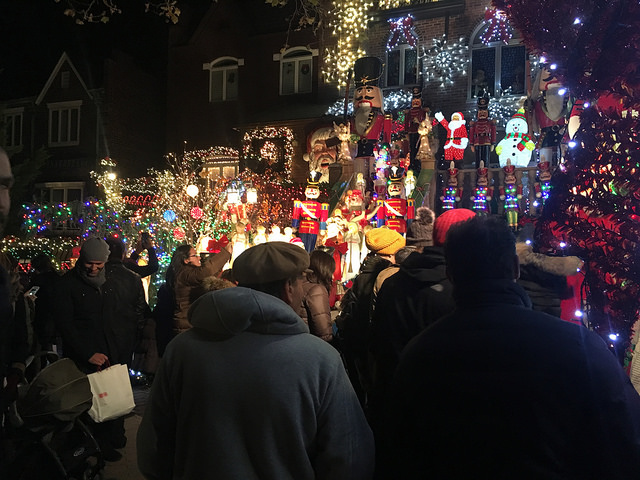 Lucy Spata’s home in Dyker Heights, is completely covered in Christmas decorations. Spata started the Christmas tradition in the neighborhood in 1986 with just 40 angels. Photo by Jennifer Cohen

“She does this for joy, she’s done this all her life,” said Joe Spatola, a friend of Spata who helps her decorate. “Even if nobody came she would still do it.”

It takes a lot of time to turn Dyker Heights into Christmas Town.

“I spent $5500 on my decorations,” said Angelo Branciforte.

Branciforte hired B&R Christmas Decorators. The company has worked on over 80 homes in the area already this season and it takes them around 30 hours to finish a large home.

Angelo Branciforte’s home in Dyker Heights was decorated by B & R Christmas Decorators for $5500. Photo by Jennifer Cohen

Some of the homes in the area are worth millions of dollars and tourists love to gawk at the Christmas bling.

“We were reading on the Internet and saw the lights,” said Laura Romera, of Madrid, Spain. “It’s very different and it’s very nice too.”

“It brings a little satisfaction to them when they see that people come to the neighborhood,” said Tony Muia, owner of A Slice of Brooklyn Bus Tours.

But others find it chaotic.

“Just talking about the lights, we really like that people come, but sometimes it’s just really hectic,” said Noel Girgenti, 22. “You get the attention but then you have to deal with it, to pull out of the driveway is the hardest part.” 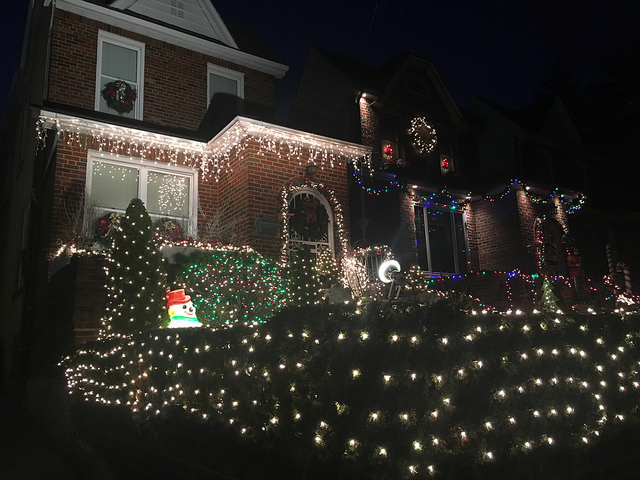 The Girgenti’s put up their decorations on their home by themselves compared to other houses in the neighborhood. Photo by Jennifer Cohen

The Girgenti family, who have lived in the area for 50 years, do their own decorating. They have seen more and more people venture to Dyker Heights each December. But as more people come there is more traffic and parking spaces have been taken away for home owners and replaced by tour buses at night.

But not all the homeowners fill the need to join the display.

“My wife and I she feels like inside is better than outside,” said Igneri. “I’m not here to show off or anything. It’s a more personal thing than a more elaborate thing.”