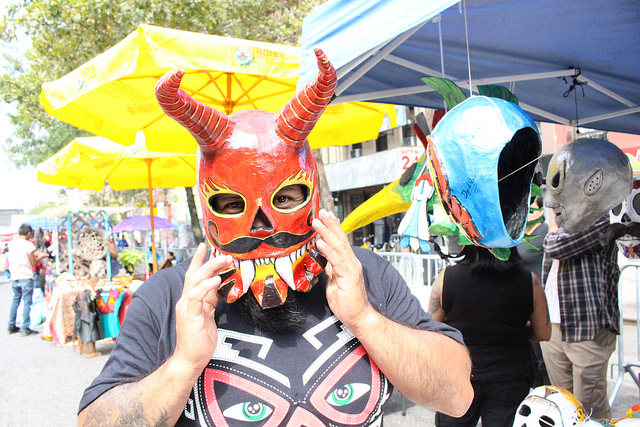 Artist Daniel Valle poses with one of his handmade masks — a papier mache devil, at the Mexican Independence Day festival in East Harlem yesterday. Photo by Amy Zahn

He took the yellow and green skull down from the string that suspended it from the top of his tent. It was just papier mache, but it still produced an audible “thunk” when Valle rapped it on its head.

Valle had just finished setting up a tent full of his handmade masks at a Mexican Independence Day festival in East Harlem yesterday. For local businesses like Valle’s, the festival was about more than honoring the day that Mexico wrested out of Spain’s control over 200 years ago. It gave them the chance to work their missions — connecting with local communities and preserving the culture of their homelands.

“I’m trying to rescue all these Mexican gods,” Valle said, gesturing to his masks. Hanging next to the skull and the wrestler, or luchador, was a mask of Huitzilopochtli, the Aztec god of war, and another luchador, this one silver.

Valle’s work is expensive, but it’s intricate, too. One mask can take months to finish, and each is handmade entirely by him. The sugar skull goes for $800. Valle’s work usually hangs in restaurants and galleries, but he came to the festival today to make contact with local communities.

“This is the only chance I get to talk to the people, to see what they like,” he said.

People milled in and out of Valle’s tent, sipping ice cold horchata, a sweet Mexican rice drink. It was only 80 degrees out, but the humidity made it feel hotter.

“Es un dia para celebrar,” or, “It’s a day to celebrate,” said festival-goer Rodrigo Cano as he perused the vendors lining the streets, many of them selling handmade goods like Valle’s. Cano came to the United States from Mexico six years ago, but he still peppers his speech with Spanish phrases.

Like the business owners around him, Cano celebrates Mexican Independence day as a means of staying connected to his culture.

“It’s to don’t forget our tradition, where we come from, especially when you are outside your country,” he said. 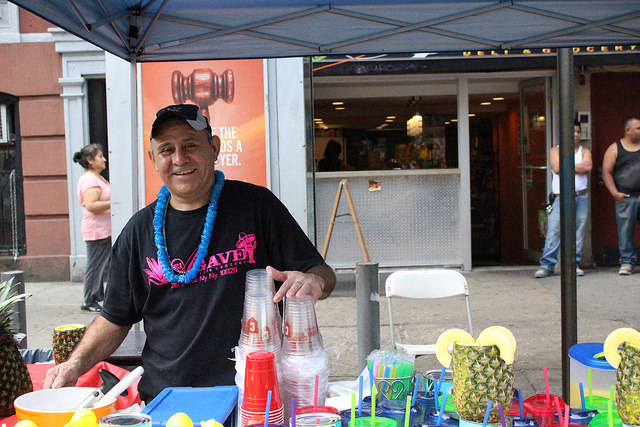 Just across the street from Valle’s tent is the small, locally owned Agave Deli and Grocery. Owner and longtime East Harlem resident Carmelo Reyes ladled sweet beverages into plastic cups before handing them to customers. Aguas frescas, light fruit drinks, are his specialty — jamaica, horchata and mangonada, a drink made with mango and lime. He learned to make these refreshments working in a restaurant in the 1980s.

“Some people don’t have papers,” he said. He opened El Agave on 116th Street in East Harlem to serve the largely Hispanic community in the area. “They’re afraid to come out on the streets because they think they’re going to deport them.” He hopes events like the Independence Day festival help people feel more comfortable in their communities.

Valle chatted with fellow vendor Antonio Rojas during a lull in business. Much like Valle, Rojas came to the festival to show his handmade art and to do his part to keep traditional Mexican culture alive with figures inspired by Mayan, Aztec and Toltec culture.

“It’s to try to make alive our past, our ancestors,” he said. “It’s important because with the passing of the years, a lot of stuff has been lost.” Rojas makes a mold for each piece, which can take over a month to complete.

“Every single one of them has a different meaning,” he said, showing off intricately carved Aztec and Mayan calendars. The calendars laid next to skulls and a Pyramid of Kukulkan, a well-known landmark from Chichen Itza in the Mexican state of Yucatan.

Just feet away sat Valle and his masks.

“Don’t let it die, all this culture,” Valle said.