East River Park Action Prepares to Save the Park They Love

East River Park Action gathers beside the park’s Amphitheater to in a last ditch effort to protest the East Side Coastal Resiliency (ESCR) project currently underway. Photo by Frank Festa

With the city’s plan set to remake the East River Park, community members are desperate to preserve the park they love, so they gathered at the park’s amphitheater Saturday morning to send a message to the mayor.

“We don’t need to be rescued; we don’t need to be saved. If you kill this park, you are killing us,” said the poet Eileen Myles, a resident of the Lower East Side of Manhattan since 1974 and a leading figure in East River Park Action, who are fighting the plan. “Why would you take green space away from this neighborhood? We need these trees. They protect us.”

The group hoped to draw a thousand people to represent the roughly one thousand trees that can be found in the 57.5 acre public park. And while those in attendance numbered closer to five or six hundred, it was the group’s largest demonstration to date. Many cherish the role the park has played in their lives over the past year and a half and are determined to keep it the way it is.

“I came here every day during the pandemic,” said Allison Colby. “I love this park. What business does the city have tearing down a thousand trees?”

The $1.45 billion ESCR project set to begin construction in several weeks aims to fortify the park as a barrier for future storm surge and eventual sea level rise. East River Park Action’s efforts to lobby Mayor Bill de Blasio to consider a community plan they say will preserve the park’s integrity have been fruitless. The group has also unsuccessfully sought an oversight hearing from City Council Speaker Corey Johnson.

From the outside looking in, some may applaud the city for taking necessary steps to combat climate change. Yet in a community ‘full of environmentalists,’ Colby said, the park has proven its worth in the wake of Hurricane’s Henri and Ida. (link to the hurricanes.

“The park is a natural deterrent for the weather, with the marshes and existing barriers, “ said Colby. “It’s doing its job as is. We do not want this park to be destroyed.”

As the crowd swelled, volunteers in yellow work vests passed out one-pagers detailing the city’s plan. Parents pushed children in strollers or walked alongside them on bikes as drums, tambourines and call-and-response chanting filled the air. People mingled with the sort of familiarity forged over three years of building opposition. So good 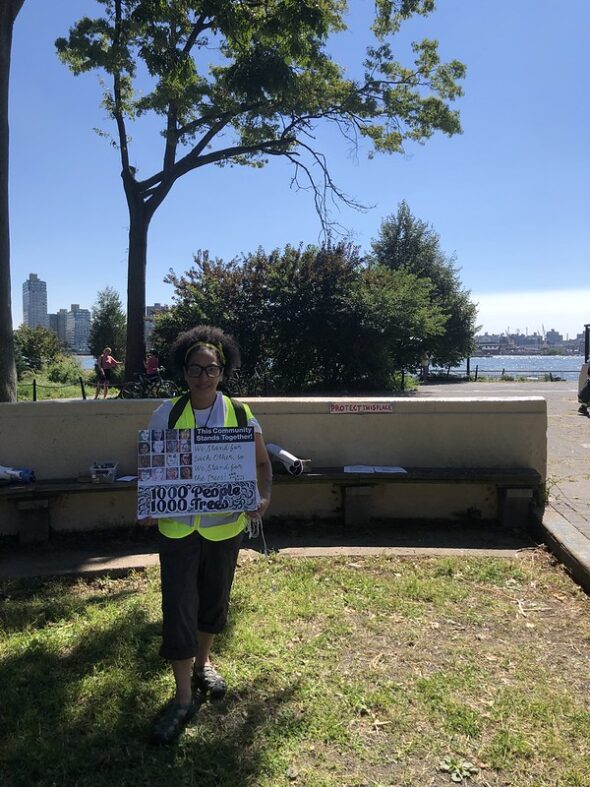 Community artist and volunteer Clara Rodriguez-Torres shows up to East River Park on a weekly basis to protest and preserve it exactly how it is. Photo by Frank Festa

For some, like community artist and volunteer Clara Rodriguez-Torres, there’s a deep connection to the land.

“When my grandpa came from the Dominican Republic in the 70s, he told me stories about watching fireworks over the East River. It felt like a special welcoming,” said Rodriguez-Torres.

She visits the East Village apartment where she grew up with her grandparents to reminisce. The apartment once rented for $60 a month and now goes for over $4,000. The park represents a part of her childhood that’s still intact.

“We’re not asking you to vote for anybody or buy anything,” she said. “We come out here every week just for this park because we love it so much.”

In what felt like a last ditch effort to rally support, speakers rotated turns with a megaphone before leading a march down the East River Promenade. Next weekend will feature one of the final public events at East River Park – a House music concert where the group hopes to recruit more believers in their cause. After that, construction will commence, and the beloved park will be forever changed.

East River Park Action believes the time for peaceful protest has come to an end.

“It’s going to be civil disobedience after this,” said Eileen Myles into the megaphone when it was her turn.

Brimming with optimism, Myles urged onlookers to sign up for future direct action, which she says there will be plenty of.

“We know some of you will be willing to chain yourselves to trees, to climb them, to camp overnight. And, to say fuck you, this is our park,” she said.

Just to clarify, East Side Coastal Resiliency began construction in November 2020. The plan the City Council approved in 2019 is already well underway in areas north of East River Park. It’s not stopping now and it shouldn’t. Those 1000 trees will be replaced by 2000 new ones in a new version of the park that’s protected from flooding.