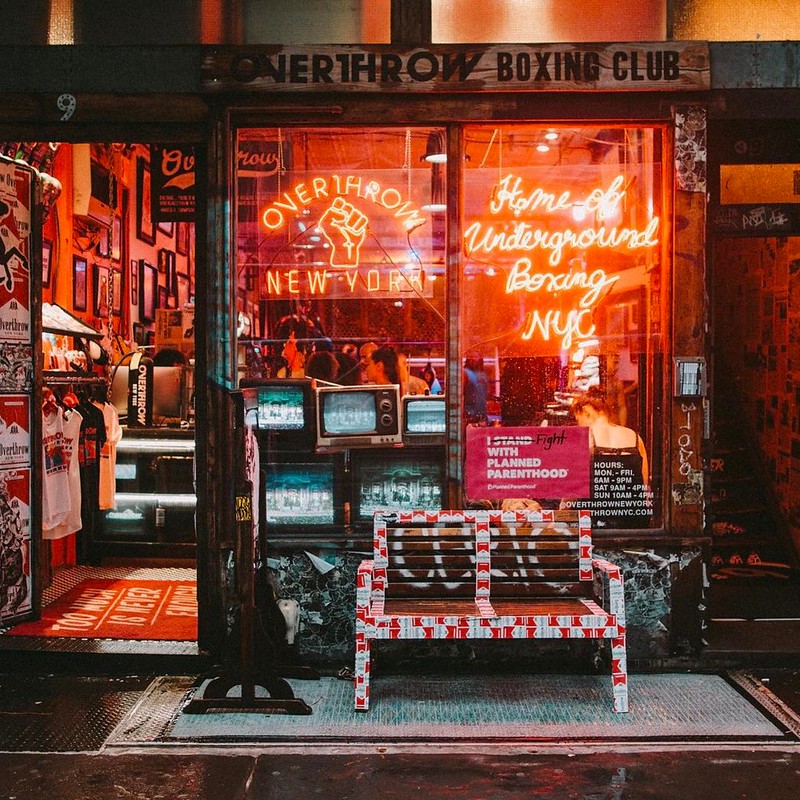 Overthrow Boxing Club, located at 9 Bleecker Street was once home to the Youth International Party and is now a community center that promotes activism, fitness, and art. Photo courtesy of Joey Goodwin.

Red neon lights and vintage television sets fill the windows of 9 Bleecker Street in the East Village. Once headquarters for the 1960s-founded activists movement, the Youth International Party, the building oozes a rich countercultural history. Today, it is home to Overthrow Boxing Club — a community center and gym that embraces the location’s past and continues its legacy of social change.

Overthrow was founded by Joey Goodwin, 36, in 2014 after he noticed a ‘For Rent’ sign in the window of the Bleecker Street building.

The space was in disarray after being neglected by its previous tenants, members of the original Youth International Party, also known as Yippies. Yippies were known for organizing anti-war protests and advocating for marijuana legalization throughout the 70s and 80s.

“It looked like a bomb had gone off in the place. There was garbage everywhere. The walls were coated with cat shit,” said Goodwin.

On the floor he spotted a pile of old Yippie newspapers, which had been published on the top floor of the building. One of them was called “Overthrow” and the name of the club now pays homage to the old publication.

Goodwin’s original motivation to open Overthrow came from his time spent playing at the famed West 4th Street basketball courts, through which he was first introduced to boxing.

Once he learned of 9 Bleecker’s Yippie past, it became intertwined with his vision, further inspiring Overthrow into a place of community-building and activism.

“It is a space where people can come and fight for what they believe in, fight for their passion, and fight to become the person they want to be and to be part of a community,” said Goodwin. 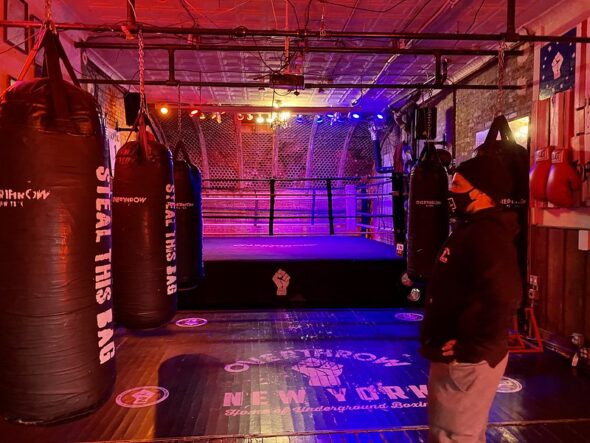 Power Malu stands on the ground level of Overthrow Boxing Club. The ring sits toward the back of what used to be an old horse stable. Photo by Tori Luecking

Power Malu, 44, a self-described “Nuyorican” (he was born in New York to Puerto Rican parents) is a founding member of Overthrow Boxing Club and their current “Community Bridge” — meaning he helps to organize Overthrow events and initiatives.

“Knowing the history of this space before it became a boxing gym,of it being a home of artists and activists, it’s something that we try to always highlight in the forefront of everything that we do,” said Malu.

Malu fell in love with boxing at a young age while watching his dad spar at the famous Gramercy Park Gym. He also has an impressive music scene resume, having worked as a party promoter, and as one of the producers of Lyricist Lounge, an underground hip-hop showcase that eventually aired on MTV.

Malu uses his past experiences to incorporate art, music, and performance into Overthrow’s programming.

“Everything I do is based off of bringing community together, whether it’s artists having a space here…[or] we’ve done break dancing competitions inside the ring…we’ve had DJs battling, performances with bands, and hip hop artists…” said Malu.

In addition to the artistic expression happening at Overthrow, the organization is active in social justice. It has hosted events to raise awareness about missing and murdered indigenous women, held fundraisers to send aid to Puerto Rico after Hurricane Maria, and offered boxing classes specifically for the trans community, among much more.

“We’re looking to use the space as a vehicle to show people that we’re out here fighting, and this is a space that you can come to,” said Malu. If you feel alone, if you are going through something, you can come here and we can connect, or we can connect you with other people.”

Malu’s nonprofit organization, Artists Athletes Activists, is preparing to host a podcast in the window of Overthrow, with a speaker that broadcasts the show onto the Bleecker Street sidewalk. It will cover topics such as health & wellness, and everyday community heroes.

“We have to really engage people and really get to know them and inspire each other and get away from the hoarding of resources, and understand that as a community, we can thrive together,” said Malu. 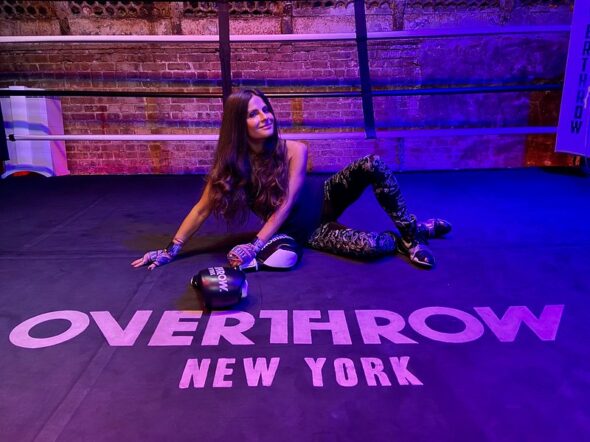 Medea Juhasz began boxing at Overthrow after a serious health scare. She had never boxed before but enjoyed it so much she was eventually attending seven days a week. Photo courtesy of Medea Juhasz

For Overthrow members like, Medea Juhasz, owner of Herbalore NYC, the club has made an immense impact on her life.

A few years ago after suffering an extreme health crisis, she embarked on a path of wellness and healing that eventually led her to Overthrow. It was its historical roots that initially drew her in.

“I feel like it is the last piece of old school New York in the city, from before it was gentrified,” said Juhasz.

She made friends quickly and started attending classes and events every day of the week, before the Covid-19 pandemic hit.

“It goes beyond the fitness aspect…it’s like a community center for like-minded people and also to educate people. They have great programming and great talks,” said Juhasz.

Overthrow reopened in October 2020 after having been closed to the public for many months due to the pandemic. Juhasz hopes that it won’t close again.

“I think Overthrow is an essential business. It’s this once in a lifetime place, it’s magical and it brings people together,” she said.

Remarkable. The person riding the crest of waves of gentrification, paying her gym fees with money earned through gentrification, chose her gym because it is “old school New York from before it was gentrified.” Yeah. OK, then.