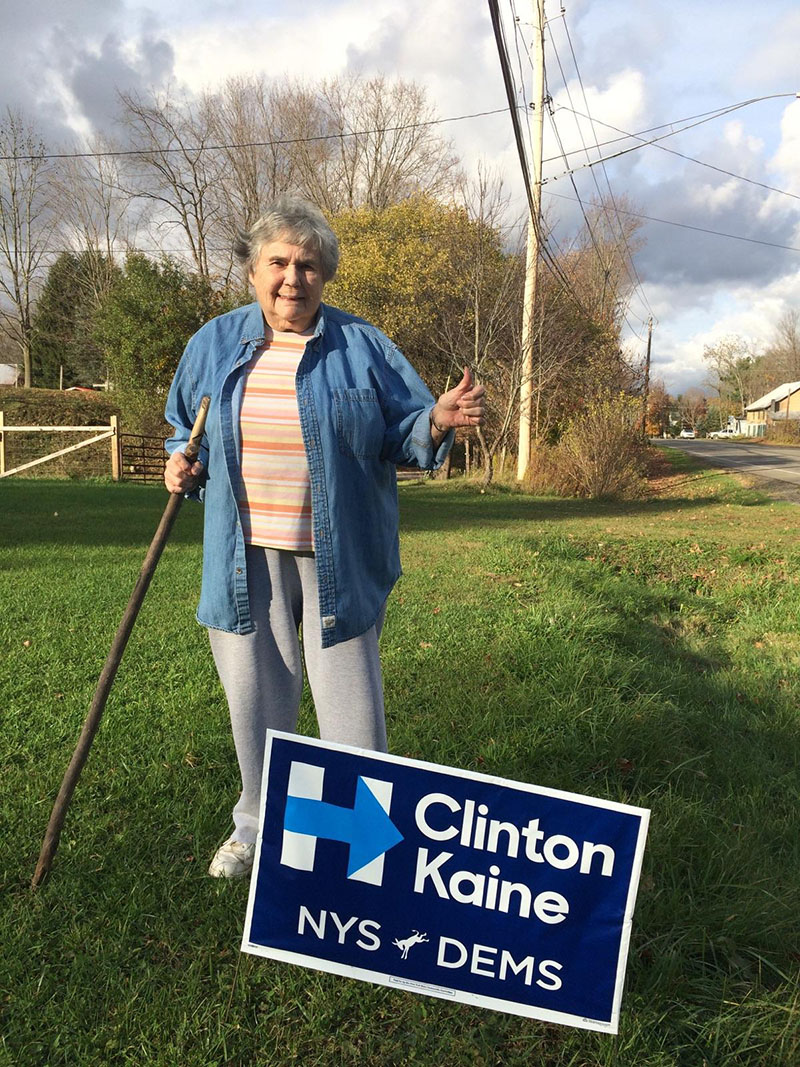 Mary Mountain stands outside with her Hillary sign, which has made her a pariah in her small town. Photo by Hattie Burgher

In the small town of Belfast, New York, population 1,600, Jim and Mary Mountain have become outcasts in recent weeks, shunned by their neighbors. Their sin: they are the only residents with a “Hillary” sign on their front lawn.

“We are kind of the exception to the rule,” chuckled Mary, 80, a retired postmaster and a lifelong resident of the town. “My daughter’s friend drove all the way from Rochester to Friendship and the only Hilary sign she saw was on our lawn.”

The Mountains live right along the major road in the area, Route 19, so if you need to get anywhere in the county, chances are you will pass by their yard.

Her husband Jim, now 82 and also retired, worked for Dresser-Rand, an industrial equipment supplier, and served on the Belfast Town Board. In his 12 years of service, he was the only Democrat.

Belfast is located in Allegany County, the third poorest county in the State. The county’s population is around 47,000 people, and its per capita income is $20,000 a year. Though economically poor, Allegany is rich with rolling hills, dairy farms, and pick-up trucks. According to the New York State Board of Elections, there are twice as many registered Republicans than Democrats in Allegany County.

So why do the Mountains vote left in a region that is a predominantly conservative? Jim says that he believes the Democrats are “for the poor guys, they are the first ones to help out the small guy.” He continued, “I don’t believe in giving everything to the rich, I’ve always been a Democrat for that reason.”

Mary said that she doesn’t understand why a lot of people don’t trust Hillary. “I think she’s a good person and they have given her a lot of trouble to get to where she is today.”

The Mountains, who are elderly and rely on many medications, fear that if Trump gets elected he will abolish Social Security and Medicare. “Those are good programs,” said Jim. “It would kill us if we didn’t have the Medicare. It would take everything else we got, it’s a big help.”

Their neighbors have not reacted well to the couple’s Hillary sign. “Yeah, they holler at us,” said Jim, who seemed to brush it off easily. However, Mary has experienced more severe taunts. One day she was out retrieving her mail at the end of their gravel driveway when a driver in a big truck yelled “F–K YOU!” at her. “I’m surprised someone hasn’t shot bullets through it yet,” said Mary of the sign.

The Mountain’s sign has certainly caused a stir in the area.

“I don’t know them, but I think it’s stupid to vote for Hillary,” said neighbor Anne Chamberlain,30 a stay-at-home mother and a registered Republican. “She scares me and I don’t have a good feeling about her. She reminds me of Hitler.” said Chamberlain.

Asked why she plans to vote for Trump, Chamberlain responded, “I guess he is the less of two evils.”

Darlene Redance, 34, another neighbor, is aware of the Hillary sign and does not approve.

“I don’t like it, I just don’t want Hillary as president. I don’t like her, she should be in jail,” said Redance, “I think Trump will bring this world where it needs to be.” She does not understand why the Mountains approve of Hillary, adding, “I’m confused about that one, doesn’t make any sense to me.”

A little bit further north along Route 19 lives Chuck Babbitt, a crop and dairy farmer. Babbitt, 63, is very enthusiastic about the GOP candidate and is baffled that his nearby neighbors don’t feel the same way.

“I think everybody ought to be voting for Trump,” said Babbitt. “I’m voting of Trump because I don’t want Hillary.”

Babbitt believes that Hillary would be just the same as President Obama.

“Obama doubled the debt in his term, where was the change we were supposed to be believe in?” said Babbitt. “I think he has been one of the worst presidents ever.”

Chamberlain, Redance, and Babbitt couldn’t exactly articulate reasons why they believe that Trump will help the residents of Allegany County and the country as a whole. Asked why Republican candidates are good for farmers and people in poorer counties, Babbitt replied “I don’t know about that one, I haven’t thought about it.” Chamberlain said that Trump wants to bring back the “Old America.” But what does that look like? “Basically before Obama” said Chamberlain.

Being a Democrat in a small town is like showing up to an Adidas PR Party decked out in Nike apparel. The Mountains are surrounded by people who may never see this side of the coin.

Residents of rural areas tend to vote Republican, a perpetual reflection of the urban-rural divide in politics. According to a an NBC/ Wall Street Journal poll, Trump leads Hillary 64% to 27% in rural areas across the states. Trump particularly does well among older, white Americans. Considering both Jim and Mary are in their 80s and white, they are defeating yet another stereotype.

Even though Jim is used to being outnumbered by his conservative neighbors (He and Mary both voted for Obama in 2008 and 2012), he is surprised by the large number of Trump signs he sees in his neighborhood.

“I don’t understand how there are so many. He has said so many things that are just off the cuff, not things that you would want to hear from a future president,” said Jim.

“Anybody that could vote for Trump could vote for that dog right there,” said Jim pointing to their dog, Milly. His wife interjected quickly, “Milly probably wouldn’t vote for him either!”

I love this article, Hattie! I need to stop and meet the Mountains! I thought I was the only Democrat in the area!

My mother, just north of the Mountains , also has Hillary signs in her yard. The Mountains are not totally alone!

I live in Allegany county and I am a registered Democrat!! I hear what you are saying, Jim and Mary. I don’t flaunt my political views because I feel like the whole town is in opposition. I grew up in the city and moved to the country when I was a teen and never quite felt like others shared my views on things and I always thought it was because I came from the city and wasn’t related to half the town, but as an adult, I now see it very well could be the political views I have.

I’m sad that the Mountains have been treated so horribly. This is still the United States of America. Regardless of race, religion, political stand. The Mountains are wonderful people, I’m confused why anyone would treat anyone badly over an election. This hasn’t happened before, atleast not to this extent. Just sad.

You’re not alone Mary and Jim Mountain and Timothy Nichols. I’m with Hillary and you. Cannot understand how Trump was elected and what in the world he would do for our poor County.

You go Mary and Jim Mountain…

Republicans have “investigated” every move Hillary Clinton has made over the 30 years she has been in public service. She has never been found guilty of anything, but if certain media tell people she is evil over and over people come to believe it. Trump is a corporate man. The Republican Party has always been the Party of big business and proud of it. The Democratic Party is the party of the working class and the little guy. Trump is already appointing big business types to guide his administration.

At least Hattie’s sign is still standing and her neighbors didn’t beat her up, or destroy her property…things that have been happening to Trump supporters on a regular basis.
We can thank the fear inciting and continuous bashing of Trump by a bias Media & the Clinton campaign.
The problem for Democrats is, they have listened to all the twisted information that came from the “Clinton News Networks”…They thought they had the facts. Democrats refused to engage with anyone that has a different opinion…
They protect “their bubble” of the world by shutting everyone else out and insulting them for having another opinion.
It’s so funny…now they are shocked because a large part of the Country thinks differently. Really??
When Trump was a Democrat these same politicians & media were friends with him.
Once he ran on the Republican ticket, he grew horns and became a demon.
Trump didn’t get votes because he convinced everyone that Hillary was evil…Hillary did that all on her own, by her own actions.
Donald Trump just confirmed what the rest of us already knew.
I’m glad I got to see this article because until now, I didn’t know what the Hillary signs looked like.

Yes, these poor, oppressed people, mostly FOX watchers, with two cars in the garage, a roof over their heads, bountiful meals on the table every day, maybe a recreational vehicle in the yard and a few moderately expensive hobbies some other perks are so angry anout what they have. No. say I’m bad at that the people down the road might be on welfare, might be getting food stamps, Medicaid. period.

My wife and I live above Sojourners. Not ones to exactly have a sign out for Hillary, but we did vote for her. We don’t support hate, and we didnt respond to Trump’s fear induced campaign.