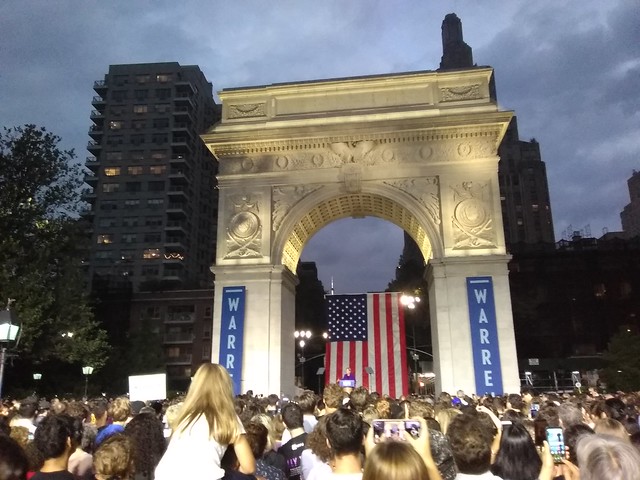 Massachusetts Senator Elizabeth Warren’s supporters like her presidential plan. Thousands flocked to Washington Square Park yesterday to show her how much.

Shouts of “Warren! Warren!” greeted the presidential hopeful as she mounted the stage under the park’s historic arch. A gigantic U.S. flag flanked by large vertical banners touting Warren’s name was affixed on the arch’s columns to serve as a backdrop for the occasion.

For three hours prior to her appearance, staunch supporters of the senator waited — chatting, texting, photographing or studying. Music blared and vendors hawked campaign buttons. There was even a sudden brief downpour.

Volunteers handed out fans with ‘I’m a Warren fan” written on them. Many women wore t-shirts printed with “Warren has a plan” emblazoned across the front.

Bronx resident Eileen Blancas, 30, wore one of the shirts.

“I like her anti-corruption plans and her commitment to the environment, climate change,” Blancas said. “There is a [Warren] plan update text notification system that I sign up for.” 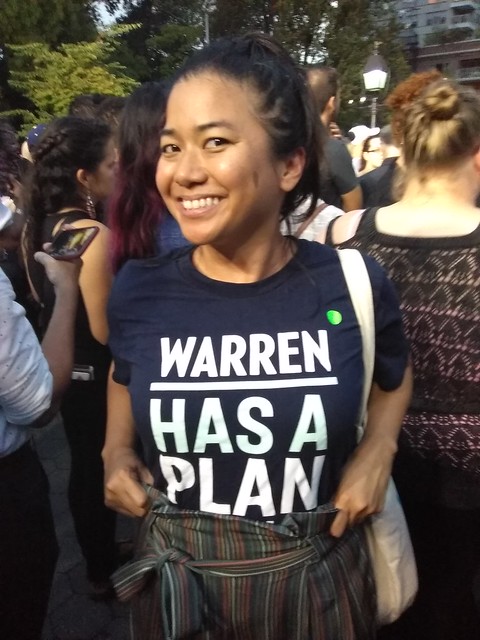 She said she wanted to stay in the loop with any new developments the campaign may be undertaking.

Information Technology analyst, Melissa Levinton, was so inspired by the senator’s performance in the three Democratic presidential debates that she immediately signed up as a volunteer and was now working her first event. Warren’s experience as a teacher and her extensive legal background in bankruptcy have prepared her to be President, Levinton said.

“She was very inclusive in the debates,” Levinton said. “She doesn’t attack her opponents. She seems polite, personable, down to earth.”

Levinton likes that Warren’s plans are thought out and specific.

“For example, the plan to tax multi-millionaires,” she said. “And she has political integrity. She doesn’t accept money from some groups like Big Oil, PACs.”

She also liked the senator’s plans on climate change and mass restructuring of the nation’s systems.

Andy Gottlieb, 26, traveled from Connecticut to see Warren, as he wants to see a more progressive candidate get elected. So far, he likes her plans and wanted to hear her ideas in person.

“I just want a progressive in office, not a centrist,” he said. “I think [President Donald] Trump is unhinged with outdated, archaic views. We need someone to move us forward.”

“The system is broken,” said Gonzalez. “Within the economic system, breaking up large corporations, making sure workers get their due rights. She has specific plans for these.”

Warren spoke of exactly that.

“I know what’s broken and I have a plan to fix it — as President of the United States,” she said to loud cheers and wavings of “I’m a Warren Democrat” campaign signs.

The senator said she planned to take on corruption in government, finance and the environment in order to take on her primary goal: Put economic and political power in the hands of the people.

As she detailed each area she would focus on if she became President her refrain was “I have a plan for that too!” followed by increasingly loud cheers of more “Warren! Warren!” by energized supporters.

Warren spoke of early workers-rights advocate and Labor Secretary, Frances Perkins, who achieved so much through persistence and the support of millions of people.

“Frances had a plan. She pushed for big structural change within the political system, while others worked from the outside,” she said.

“This is our moment in history – to dream big, fight hard and win.”