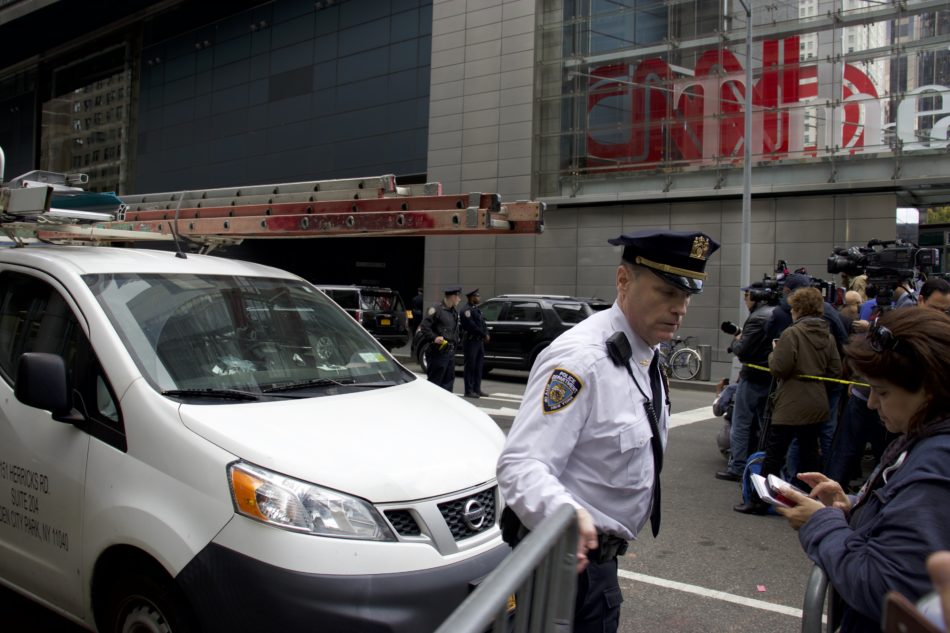 Police manage the crowds at CNN headquarters today after an explosive device was found at their Columbus Circle headquarters. Photo by Li Cohen

At 9:30 a.m., a suspicious package was found in the mailroom of CNN’s headquarters at Columbus Circle in New York City. The package contained white powder and an explosive device that law enforcement said was virtually identical to similar devices which had been addressed to Hillary Clinton, Barack Obama and George Soros.

The Time Warner Building, which holds CNN’s offices and the Shops at Columbus Circle, was evacuated, and a warning was issued to “shelter in place” or stay where you are, on mobile devices via the emergency alerts system. Despite the warnings, journalists and observers alike gathered in the area, speculating on what was going on and what spurred the wave of threats. 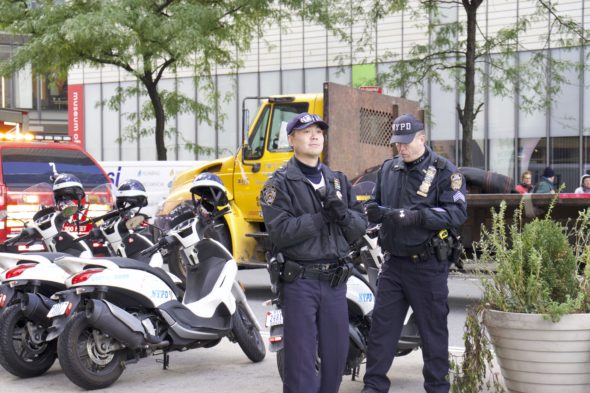 NYPD officers and other law enforcement officials cordoned off the affected area. Photo by Li Cohen.

Some worried that the situation had been encouraged by President Donald Trump’s violent rhetoric.

“I think that it’s the divisive rhetoric that the President uses at his rallies daily, on Twitter daily, where he just encourages the nation to be divided,” said Laura Bray, who had been shopping at Whole Foods in the shopping center. “He incites violence, he encourages violence, he likes people that commit violence against journalists. I think that some people take what he says as the leader of the free world very seriously. They take it as gospel. And I think what we’re seeing is them acting on his rhetoric.”

Journalists on site expressed concern about the increasing normality of such threats.

He got an alert on his phone about what was happening, and wanted to be with fellow journalists as it unfolded.

“First of all, the President has been demonizing journalists and the press in general, and then this happened,” he said. “The only thing I could think about is that with him demonizing the press, there are going to be crazy people out there who try to do something.”

While Tagala expressed fear about the recent attacks on journalists, he said that he was not scared about continuing in his career, even as the role of the press in society changes.

Others said that the situation was the result of increased divisiveness within the country, especially as the 2018 midterms approach.

“They were targeting Democrats,” said Thomas Roeker, who works at a restaurant in the Shops at Columbus Circle and was evacuated. “I mean, CNN, Obama and Hillary, that’s got to be a correlation. It was timed too perfectly. It’s scary to think someone’s political views could drive them to do something so crazy and outlandish.”

Conservative blogger Stephen Parelli, who wore a “Make America Great Again” cap,  said that the rhetoric contributing to the defamation of the media is a result of people not agreeing with media outlet platforms and journalists focusing on perspectives that fit their own agendas.

“I appreciate when CNN or Fox News has someone else on the panel that is going to take the opposite view,” he said. “Sometimes it gets heated, but when they really try to go for presenting the opposite view it’s good. We need to have more of that. There was a day when journalism really was trying to uncover the facts but now it’s about reporting on one’s platform.” 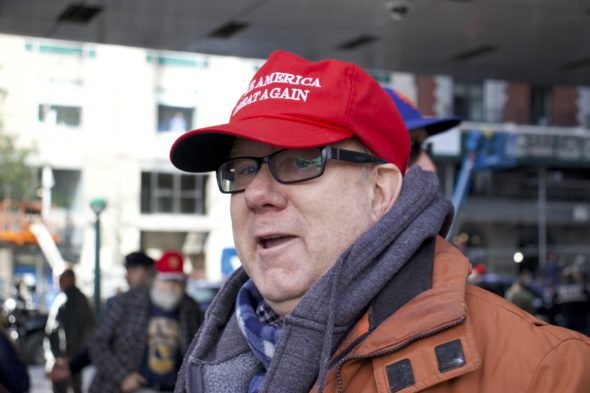 Stephen Perelli, a conservative blogger, called for more diverse discussions in the media about political issues to reduce divisiveness about journalism. Photo by Li Cohen.

When Parelli got the news of the situation at CNN, he immediately thought of his experience witnessing the second plane hit the World Trade Center on Sept. 11, 2001 from the 30th floor of Rockefeller Center.

“It didn’t evoke a lot of scary feelings because I felt like the situation is under control,” he said, adding that the NYPD is one of he best police departments in the world. “It reminded me a lot of what’s been happening in Europe. There were a lot of bombs going off.”

“When you see Obama, Clinton and Soros, you think it must be the Alt-Right. I would hate if that’s the case because that doesn’t represent me. I come from the right and I’d hate to think anybody would do that, alt right or alt left, because that’s not the way we behave in a civilized society.”

The device was removed from the area just before 11:40 a.m. by the New York Police Department’s bomb squad, who said that it was a live explosive with white powder. The department’s counterterrorism unit and K-9 unit monitored the area throughout the morning.

The packages sent to these locations, as well as Rep. Maxine Waters, D – Calif., and Obama’s attorney general Eric Holder Jr., are considered linked. An investigation into the situation is underway and officials believe that the same person or group is responsible for all the devices. A criminal investigation is also being launched by the Secret Service.

According to The Guardian, the area has been secured and swept with dogs and equipment. Police will also be deployed to media locations throughout New York City. No specific, credible threats are directed at the city.

This is a breaking-news situation. Please check back for updates.