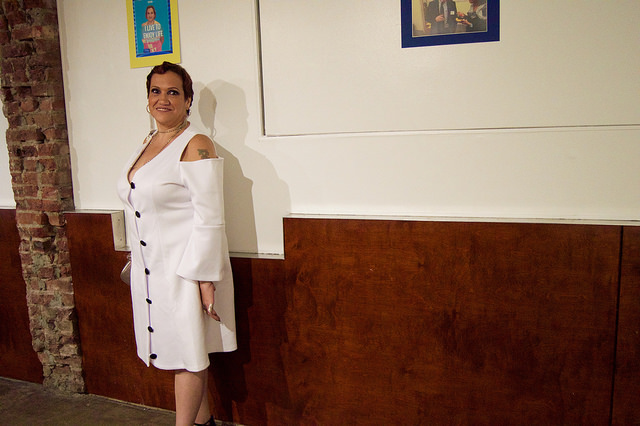 Sylvia Garcia, a former resident of Susan’s House, a shelter for women with medical needs, poses just before the 6th Annual Health Empowered Beauty Fashion Show hosted by Care for the Homeless, yesterday. Garcia was one of the fashion show models. Photo by Samantha Springer.

Homeless women walked the runway last night in a glittering fashion show that aimed to not only fight the stigma these women face, but give them a voice to define who they are.

“We’re labeled as being drug users, or whatever negative,” said Renee Brooks, a model in the show. “Sitting home all day with soap operas, no education. That’s not true for all of us.”

Brooks and all the models who participated in the show live at Susan’s Place, a 200-bed transitional residence for women who are medically frail or mentally in the Bronx.

Brooks walked in a candy red evening gown with a black vintage shawl and a felt hat. She added a runway twirl for flourish. Brooks has been a resident of Susan’s Place for just over a year.  A heart condition required her to need a defibrillator, and she was forced to seek out long-term medical treatment from the shelter. She believes the fashion show was an opportunity for people to understand that not everyone’s situation is the same.

“They get to see us in another light,” said Brooks. “They lump us all into one group, one category and that’s not true.”

Brooks hopes to leave the center soon and get a place of her own.

Sylvia Garcia, also a model in the show, is a former resident of the shelter. After nine months of medical treatment and counseling, she was released and now has custody of her four grandchildren, ranging in ages 5 to 14. She also teaches her own crochet class once a week at Susan’s Place.

The rhinestones on Zuleyka Cordera’s black, full length evening gown glittered as she crossed the stage with her head held high. Cordero, a native of the Dominican Republic and a resident of Susan’s Place for just under two years, was nervous for the show. She was also excited for the opportunity to thank the shelter for helping her overcome her anger and learn how to use patience to solve her problems.

“Things that are big for me are small for them,” she said. I feel like these people have been my support system.”

Special guest Emmy Award winning and Academy Award nominated filmmaker Joe Berlinger told the attendees that his first experiences with “the issues of homelessness” came more than 20 years ago, while he was making a documentary about the lives of people on the street.

“At the time, Giuliani was cleaning up the streets and getting rid of the squeegee men,” said Berlinger. “There was all sorts of policy and debates about what should be done with the homeless, but nobody was dealing with the human issue of what it’s like to be homeless.”

Cheryl Law of the Bronx came to show her support, but she was not always a supporter. When she learned a homeless shelter was to be opened near her home, she joined many of her neighbors in protest. She quickly realized that she had jumped to conclusions about the people who would be there.

“I just assumed it was people who made the choice to live that way,” said Law.

She now volunteers at the center and attends events like the fashion show to support those who are affected by homelessness. She also wants to help others who, like her, have been blinded by the misconception that all homeless people are the same.

I am at Susan’s Place