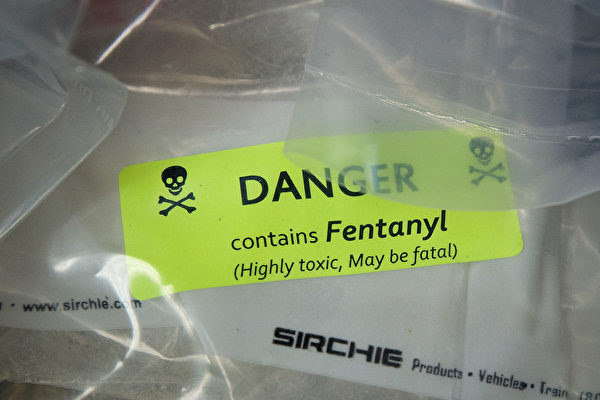 While fentanyl is an extremely potent and dangerous drug, it’s nearly impossible to be affected by it just from being in the same room as it, or by touching the powder.

Eric Weil and Belinda McLin’s lives changed forever when they found a packet of white powder in their guest bedroom in August 2016.

Family friend Justin Levesque, 30, was high, squatting on the ground and talking about how he wanted to kill himself. Both adults had seen the effects of the opioid crisis in their small New Hampshire town of Alton and were concerned for his well-being. Not sure what else to do, they called the police, bringing three officers to their doorstep.

One officer, Jaime Fellows, ordered Weil to drop the packet of still-unidentified white powder. He complied, but after nearly 15 minutes it had not been picked up. Fearing for the safety of his dog, two cats, and nine free-range chickens, Weil picked it up again. A small amount of the powder got on his finger so he blew it off – which was when the nightmare began.

The officer was seen by a paramedic, but Weil, McLin, and Levesque never received medical attention, according to McLin, despite having the same or greater exposure as Fellows. As a result of the incident, Weil was charged with reckless conduct with a deadly weapon, a class B felony with a sentence of three and a half to seven years. He was initially convicted by a jury in September 2018, but Judge James O’Neill set aside the verdict. The prosecutor swore to try again, but the ordeal finally ended on February 13, because the prosecution did not believe they could prove the case beyond a reasonable doubt.

This isn’t the only case where the concern of a fentanyl contact overdose has affected people and led to harsh charges. Fentanyl is an extremely powerful drug, and a few grains of it are enough to do severe damage, or even cause death – but it can’t be absorbed through skin contact or basic airborne exposure.

“In powder form, it should have no ability to cross your cell membrane and get into your skin that way,” said Ryan Marino, a toxicology fellow in Pittsburgh, acknowledging that if one’s hands were sweaty or had liquid on them, there was a slim possibility that powder fentanyl could diffuse in. “In terms of aerosolization, it is a powder, so theoretically someone could blow it down your mouth – but those situations would have to be pretty wild.”

Marino also said that while fentanyl itself has been around for decades, stories of people being affected by contact or airborne exposure seem to be fairly recent.

Doug Collier, a retired Drug Enforcement Administration (DEA) agent, has worked on opioid-related cases for almost 27 years. He’s had first-hand experience with crime scenes that are tainted with fentanyl, and  the fear of a contact overdose is real.

“It’s happened, with some of our officers, that they didn’t think they needed to put the gloves and mask on because, you know, ‘We’re narcotics agents, this is what we do’,” Collier said. “A plume went up in the air. It was airborne. The officers inhaled and then all of a sudden started to come down with the same symptoms that would affect anybody dealing with a central nervous system depressant. He wasn’t responding.”

According to Collier, the affected officer showed symptoms that included shallow breathing and lightheadedness, but to Marino, those symptoms, and symptoms reported in similar situations, appeared to be symptoms of an anxiety attack rather than symptoms of fentanyl exposure.

For agents like Collier, the fear is real, even if the risk is not. Because of the perceived risk, cases where fentanyl is present tend to be penalized more harshly, like it was in Weil’s case. As a result, people are becoming wary about calling the police in a case where fentanyl may be involved.

“I worry that criminalizing people for a drug overdose will make people who find overdose victims not call police, will make people more hesitant to contact first responders in the first place,” said Marino. “Being scared to respond to these scenes can delay the appropriate care. I think the response should just be to treat the person, and if crimes were committed, we could figure it out later – but making it a criminal enterprise instead of a resuscitation will just end up hurting people.”

He said that he has already seen the fear of a contact overdose impede immediate care.

“I have actually seen people, both in the community and in the hospital, who have overdosed and someone is hesitant and will not resuscitate them because of this fear that it’s almost contagious,” said Marino. “I’ve personally seen people sealing off someone who needs immediate resuscitation just because they don’t want that to spread to them.”

Tino Fuentes is the opposite – he has no fear of a contact overdose from fentanyl. He’s been working in harm reduction for over two decades, and since 2016 he’s been helping drug users test their drugs to see if they’re cut with anything. He also helps train people in harm reduction methods, including the use of Narcan. Before his career in harm reduction, he was a drug dealer – he’s had more experience with fentanyl, and other drugs, than many.

“I touch fentanyl every day,” said Fuentes. “I still go out into the street. I test drugs myself. I’ve taken these bags of dope that, when I test it, they don’t even have heroin in it, it’s just fentanyl, and I rub it on my fingers and show people. You can’t walk into a room with a ten-pound bag of fentanyl and overdose. If you touch it, it’s not going to kill you.”

Fuentes admitted that it’s possible to be affected by fentanyl if you touch it and then put your hands in your mouth or nose, but an airborne or on-contact overdose is “practically a myth.” Like Marino, he’s worried misinformation affects how people respond to overdoses.

“At one time I had a problem trying to train people in Narcan, because they were really going by these myths of ‘Well, somebody’s overdosing on fentanyl, I’m not going to try to rescue them, because I could die,”’ Fuentes said. “We have to break these myths because they could prevent somebody from saving someone’s life.”

McLin and Weil said that, if given the chance to do it over again, they wouldn’t have called the police, or helped Levesque in the first place. The couple is currently in deep debt due to legal costs and both of their small businesses are suffering, something Weil attributes to the negative publicity. The two have set up a GoFundMe to try and cover their costs, but said that in the future they’d avoid the trouble.

“If someone were overdosing in my house again, I’d drag them outside, leave them in the street, and pretend not to be home,” said McLin. “I won’t call the police again.”

Nice job thank you for contacting us , I hope this helps other people, the possibility of this happening to you, me ,them is out there please be careful and the best of luck to you and your future