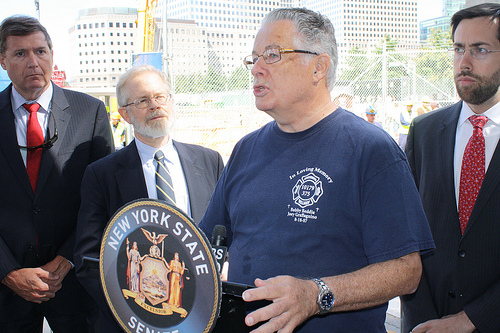 Joe Graffagnino speaks at the site of the Deutsche Bank Fire of 2007, a tragedy that took the life of his son NYPD Firefighter Joseph Graffagnino.

Joe Graffagnino speaks at the site of the Deutsche Bank Fire of 2007, a tragedy that took the life of his son NYPD Firefighter Joseph Graffagnino.

Joseph Graffagnino vividly remembers where he was on August 18, 2007— the day his only son lost his life because of fire and safety code violations.

“I was in church,I got the call that Joey was injured, ” said Graffagnino, 64, of Dyker Heights, Brooklyn. “Once I saw the reverend from the fire department, that’s when I realized it was bad. It was absolutely devastating.”

Joe’s son, also named Joseph Graffagnino, was a member of the Ladder Company 5. He and another NYPD firefighter died from smoke inhalation after trying to combat a fire at the Deutsche Bank building in Lower Manhattan. An investigation later revealed multiple fire and safety code infractions contributed to the firefighters’ deaths that day.

“That building was supposed to be inspected every 15 days,” said Graffagnino, “But there hadn’t been an inspection for eighteen months prior to the fire.”

Since then, Graffagnino has taken an active role in making sure other New Yorkers don’t lose their lives because of gaps in fire code regulations.

Graffagnino, State Sen. Daniel Squadron and Assemblyman Richard Gottfried spoke before members of the New York City Council yesterday, to urge them to implement the fire and safety code regulation changes recommended by a Task Force.

Sen. Squadron said the Task Force’s report lists at least 20 recommendations for state buildings and projects in New York City, but ultimately the goal is to have all buildings in New York City under the same fire code regulations.

Assemblyman Gottfried said it is common sense to use New York City’s fire code over the State fire code.

“We need state legislature to put state projects and buildings squarely under New York City’s codes,” said Gottfried. “The city fire and building codes are widely regarded as being the gold standard. It is New York City Firefighters and other first responders who rush to the scene when there’s a problem, they ought to be protected.”

But the politicians said there has been some reluctance to put the recommendations in place because of the many levels of different administrations that must be dealt with.

“There is a bureaucratic reluctance to make changes,” said Sen. Squadron, “It is inexcusable that we have buildings in New York City that are less safe because of bureaucracies.”

For Graffagnino, the red tape just doesn’t make sense. He said the price the state would pay to get state buildings up to city code can’t compare to what it will pay if more lives are lost.

“It’s a drop in the bucket,” said Graffagnino, “Eventually they’re gonna wind up paying for it, because families are going to sue. I’d rather pay for it in money than in blood.”

This past May, Graffagnino’s daughter-in-law received $10 million in a settlement with the city and the Deutsche Bank building contractor.