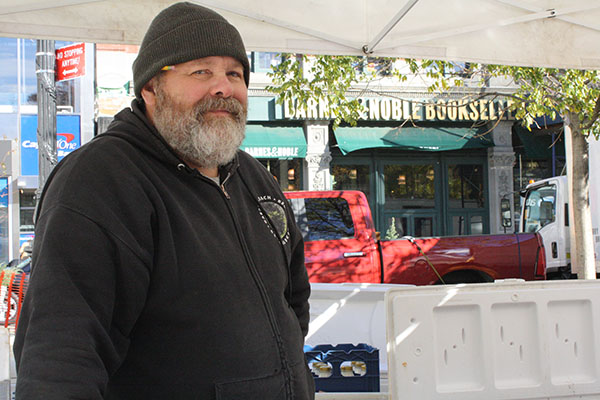 Amid crowds of shoppers out to plan their holiday meals, Tim Tonjes and his wife Mary tend their stall at the Saturday Union Square Greenmarket. Customers buying bottles of cherry and raspberry yogurt drink from Tonjes Farm Dairy may not realize that the couple drive over two hours from Calicoon, NY, to sell their products.

“We end up being the farmer, the dairyman, the processor, distributor, marketer, the whole thing,” said Tonjes, 57. “It’s a lot of work, but we’re small, a family farm.”

Dairy represents 51 percent of agricultural receipts in the state, according to Bruce Krupke, Executive Vice President of the Northeast Dairy Association.

“And agriculture is the largest industry of the state,” said Krupke. Despite the importance of dairy farming, farmers like Tonjes struggle to make ends meet.

But a small activist organization is seeking to reframe the struggles of dairy farms, and connect them with something seemingly worlds away – the prison industry.

“Demand a new urban-rural relationship” is the slogan of Milk Not Jails, an organization focused on the future of both dairy and prisons. Tonjes Dairy Farm is a partner of the organization, which believes that rural areas have seen a decline in dairy farms and a simultaneous expansion of prison facilities.

“We know that before the correctional officers put on the correctional suit, they had farmer suits,” said Tychist Baker, 36, co-founder of Milk Not Jails. Baker, from Brooklyn, spent time in prison before becoming a community activist.

“We are a dairy marketing and distribution co-operative and we are a political campaign building an alliance for a sustainable and just regional economy,” states the organization’s website. Among other things, the group advocates an end to criminal justice practices that they believe unfairly target minorities, resulting in racial disparities in prisons. The group also believes that with consumer and government support, the rural economy would not have to rely on prisons.

Tonjes said his involvement with Milk Not Jails came from a desire to increase his sales, not out of interest in their advocacy. His products are distributed by Milk Not Jails, expanding the reach of his business. Tonjes Farm Dairy originally only produced milk, but now processes yogurt and cheese to compensate for unpredictable milk prices.

“Making cheese and processing our own just helps us even it off,” he said.

Ronnybrook Farm Dairy is another partner of Milk Not Jails, a larger company with commercial success. Tom Toigo, who helps to sell Ronnybrook products at the GreenMarket, was pleased his farm got involved with Milk Not Jails. But he believes the best strategy for a small dairy is to specialize.

“The way in our region that agriculture tends to survive is people tend to find little niches, that’s kind of the way to do it,” Toigo said.

Baker’s goals for Milk Not Jails are focused on system-wide reform.

“The prison system is very racist,” said Baker. He believes the fact that most people in prisons are black men is a sign of an institution in need of transformation, a transformation that could encourage more understanding between urban and rural areas. According to the organization, 90 percent of the state’s prisons are in rural New York, even though the vast majority of people in prison come from New York City.

Milk Not Jails also advocates a continuation of the New York Farmland Protection Program, and passing policies to increase farm food in public schools. Through partnering with dairy farms, the organization gains their public endorsement. In return, Milk Not Jails markets their products at farmers markets and through a co-op distribution throughout the city.

In fact, in New York State over the last few decades, most new prisons have been constructed in rural counties, according to a study by The Sentencing Project.

Milk Not Jails wants to change that.

“The Milk Not Jails brand of products is an alternative economic relation built to demonstrate that rural New York does not have to be dependent on the prison industry,” says the organization’s policy agenda.

But outside of Milk Not Jails, some believe the connection between New York dairy farms and prisons is a stretch.
Max Kenner, Executive Director of the Bard Prison Initiative, said that while there is undoubtedly a connection between the rise of the prison industry and the demise of agriculture, one should approach the organization with some skepticism.

“I think the folks at Milk Not Jails are naïve about dairy farming,” he said.

From the perspective of the Northwest Dairy Association, the organization draws more than just skepticism.
“The connection is so far out that we’re not taking it seriously,” said Krupke of the link between dairy and prisons. “Their effort is interesting, but it’s not something that’s got much traction at all.”
Either way, small dairy farms are still left with few options.

“It’s a tough way to make a buck. We work very hard at it, we don’t make very much money,” Toigo said, “If you’re a mainstream dairy farm selling milk to the cooperative, you have to be very big, you have to have a lot of cows, in order to be viable.”

For now, Tonjes Farm Dairy is surviving against the odds as a small operation. Tonjes is a second-generation dairy farmer, and hopes his kids will take an interest in the business. But over the years, he has witnessed the decline of the industry.

“When I started I think there were about 30,000 farms in New York, now there are about 4,500,” he said, “There’s still a lot of milk in New York, but the number of farms has just decreased.”

Despite the ideas advocated by Milk Not Jails, he isn’t sure what the best change in the future would be.

“I have no answer other than doing what I’m doing. I take my products right to consumers and that’s it,” he said.