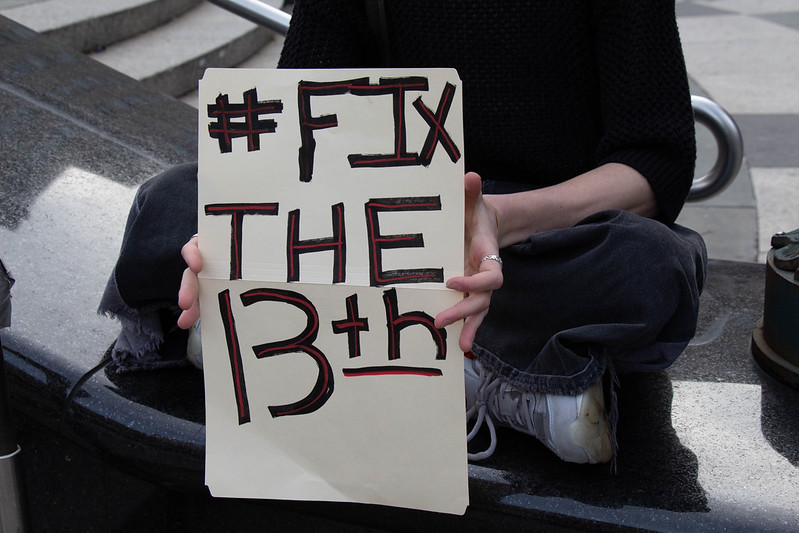 A rally attendee holds a #FixThe13th sign in solidarity with with the formerly incarcerated and advocates in Foley Square. Annie Iezzi, 3/15/22.

Fed up advocates and directly impacted folks gathered in Foley Square  yesterday for an “End Convict Leasing 2.0 Rally” to raise the alarm about what they call a reintroduction of “legal slavery” into New York state prisons within Governor Hochul’s “Jails to Jobs” proposal.

“Jails to jobs sounds good, but bringing back forced labor isn’t even the worst part,” said Grace Ortez of #FixThe13thNY, who organized the rally. 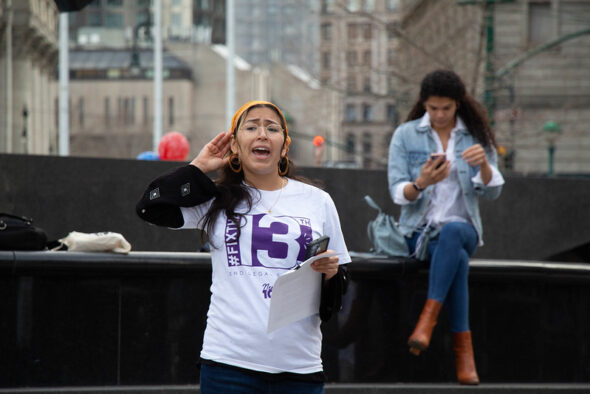 The plan aims to improve re-entry into the workforce and reduce re-entry into the prison system for the formerly incarcerated, but one facet is allowing private companies to contract imprisoned workers, a practice that has been outlawed in New York since the 1890s.

“Corporations already making money through exploitation will be making even more on the backs of the oppressed. On top of that, the state could take up to 50% of those wages away,” Ortez said.

One stipulation of the proposal is up to 50% wage garnishment, a process by which the state can collect a percentage of the pay of incarcerated workers for costs like taxes and child support. 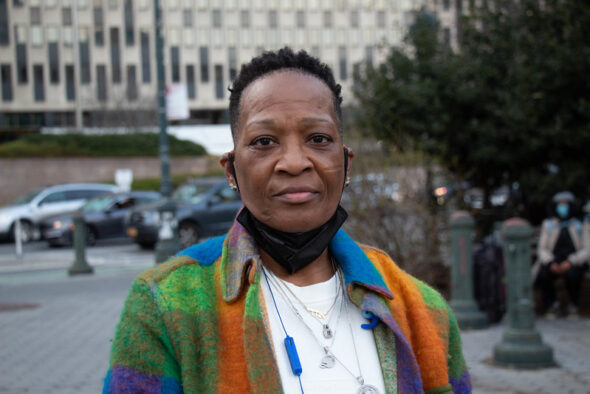 “Out here, there’s a lot of jobless people. In there, we’re being used,” said Audrey Johnson, a formerly incarcerated woman, in response to the budget proposal.

She said  that instead of guaranteeing competitive wages inside the prisons, the amendment would reduce the competition of outside jobs with cheap prison labor.

“It is slavery,” Johnson said.  “You’re getting 10 cents an hour, and it takes jobs away out here. If private companies can have prisoners make products, they aren’t going to pay minimum wage out here.”

New York State residents use a wide range of products made by imprisoned workers. From car license plates to surgical masks, incarcerated people in NY generate a $50 million manufacturing economy for the state each year.

Shear Avory, an advocate with New Pride Agenda, pointed out that incarcerated workers have been essential during the COVID-19 pandemic.

In the final section of the 2023 Fiscal Year State Budget, Governor Hochul proposed a constitutional amendment to, “allow employment [of imprisoned workers] by private entities”. Hochul’s office emphasizes the skill-building potential of the program, calling it a, “public-private partnership that would enable hybrid work-release programs within prisons.”

“These partnerships, which would be voluntary and pay a competitive wage, would provide critical private sector job skills to incarcerated individuals,” Hochul’s office said in an online press release.

But incarcerated people and advocates are skeptical of all parts of that statement. Vidal Guzman,  who served four years between the Greene and Riverview Correctional Facilities in New York, said that he was, “coerced and forced in labor and vocation,” during his time in prison. Guzman worked as both a mason and a porter there, even though he repeatedly expressed his interest in vocational training in computer technology. He said  that when he told a Correctional Officer that he would prefer computer work to masonry training, the officer threatened him with solitary confinement.

“I survived legal slavery,” said Guzman, saying that the work one does in prison isn’t voluntary.

The exact value of imprisoned people’s labor, their wages, will be proposed before the April 1 deadline to set the state’s budget this year. If approved, the state legislature would have to greenlight the same amendment in the budget a second time next year. Then, New York State voters would have the final say on the constitutional amendment to allow private companies to contract labor in prisons.

At the rally, Avory referenced New York’s long history of protest and organizing for fair wages and working conditions, invoking the Triangle Shirtwaist Factory Fire and women’s history month to frame private prison labor as a return to a dark chapter of the state’s history.

“We cannot let companies treat prisons like sweatshops,” said Avory. “It is ridiculous that the most progressive state in our nation, with a woman at the helm, would take such a huge step backwards.”