Friday the 13 is the day to get inked for cheap 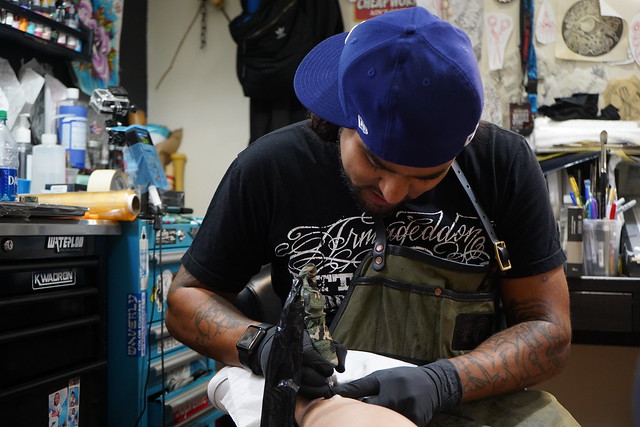 Iann Gama  owner of Amageddon Inc  is tattoos an original design on a  first-time tattooee. Photo by Thomas Hengee

Friday the 13th is a day many who are superstitious consider unlucky, but for tattoo shops in New York City, it is a day of celebration as people from all over the boroughs flock to their nearest studio for discounted tattoos.

“We have been in business in Bushwick the last 22 years but have been doing the Friday the 13th event for the last five,” said Iann Gama, owner of Armageddon Ink, in Bushwick. “Each year, it gets crazier.”

Human canvases stood outside Armageddon—a graffiti and hip-hop influenced shop in the heart of Bushwick—in a line stretching down Bushwick Ave, patiently waiting for their name to be called from a list. As freshly-inked clients left, Gama’s daughter stepped outside with a clipboard, letting five or so excited patrons in at a time. 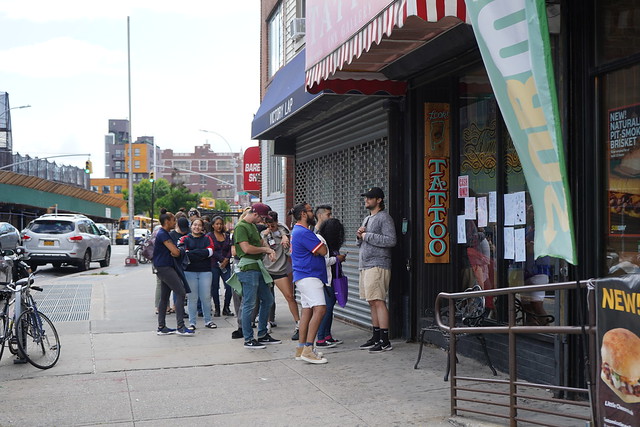 On Friday the 13th, Armageddon Tattoo abolishes their usual $180 hourly rate, offering those who patiently wait exclusive designs at a discount. Customers wait outside not to overcrowd the shop. Photo by Thomas Hengee

“It’s my birthday weekend,” customer Emily Garcia said. “This is my first tattoo. I never took the initiative to get a tattoo, but today seemed like a good day for my first one.”

Although you cannot get a custom piece, Armageddon’s usual $180 hourly rate is replaced with tattoos ranging from $20 to $80 featuring a wide variety of designs.

“I needed a moon on Friday the 13th before the full moon,” said Aliyah Aziza, who was online in front of Armageddon at 8:30 am.

While some reasoning was spiritual, others were sentimental.

And others made it a tradition all their own.

“I have been coming here for two years now,” Ikra Rashid said. “I have four from Friday the 13th, after today I will have eight.”

Like clockwork, the artists at Armageddon set up their stations, tattooed the design of their client’s choice, and with a handshake and smile said goodbye to their canvas, only to begin setting up for the next one immediately thereafter.