Frigid temperatures, but some homeless prefer the streets to shelter 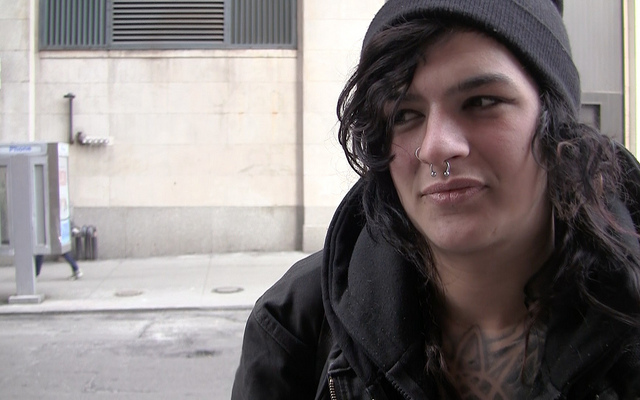 Kate Graft who is homeless, doesn’t know if she would go to a shelter if this weekend weather continues to plunge. Photo by Rakeesha Wrigley

This weekend’s bone-chilling weather could be life threatening for New York City’s homeless population. Forecasters predict temperatures as low as three degrees on Sunday night. Adding snow to the icy streets, wintry weather heightens the risk of living outside.

In these weather conditions, the Department of Homeless Services (DOHS) activates its Code Blue policy. The policy is initiated when the temperature drops below 32 degrees because of the possibility of the homeless being injured or dying in the streets from hyperthermia. DOHS street outreach efforts are increased to check on the homeless and to offer them resources like shelters and drop-in centers. Still, many of the city’s street homeless choose to tough it out under sleeping bags, blankets and scaffoldings.

Kate Graft, 24, is from Maine and has been homeless since being kicked out of her parents’ house at 15.

“I would rather freeze on the streets than go into a shelter,” Graft said. “We don’t want to stay with drunk home bones (older homeless men) who piss themselves or have bugs.”

On Tuesday, the DOHS conducted its annual Homeless Outreach Population Estimate (HOPE) in midtown Manhattan. At midnight, over 3,000 volunteers combed the five boroughs with HOPE surveys and offers of shelter for the homeless. Joshua Rodriguez, 27, who works as a multimedia director in the daytime, volunteered to give back by giving his time.

“I like the experience of trying to help and give back to people in need,” Rodriguez said. “I always have somewhere to go at night whereas a lot of people don’t.”

Rodriguez teamed up with his friend Tehura Banks, 34, a rent administrator for Common Ground to survey the areas between 50th St. and 10th Ave.

They came upon a homeless woman covering her shopping carts with plastic, and a homeless man preparing his bed on the sidewalk. Rodriguez offered them shelter for the night.

“I just want to stay here and work,” the woman said.

She had barricaded herself behind a barrage of about seven shopping carts where she served as a shopkeeper and her carts a type of thrift store. Her sale items were distributed among her carts. She had carefully covered her items in cardboard and plastic to protect them from potential snow and rain. The carts, the scaffolding from the building she was under and the well-lit gas station to her left were her security from both the weather and unwanted visitors.

“I don’t want anything from the government,” she said. “I don’t want to go into a shelter. I have everything I need right here. Last time I went I was attacked.”

There are over 268 shelters in New York City operating under the Right to Shelter mandate which provides temporary emergency shelter to eligible men, women and children in distress. Despite awareness of shelters, many of the homeless prefer the street, using the subway stations as temporary housing until removed by the police.

Studies show that the majority of the homeless living on the streets, are mentally ill, suffer from drug addiction or have serious health issues. Four out of five street homeless New Yorkers are men, according to the Coalition for the Homeless. There is no accurate count of the number of homeless in the city streets, but the coalition estimates that figure to be in the thousands. Most
live on the streets of midtown Manhattan.

Marc Clemente, 29, from Connecticut, has been on the street since he was 17. He said he only uses the subway for shelter in emergency.

“If it gets really bad we just go down to the subway and wait for the police to kick us out or arrest us,” Clemente said. “Other than that we just go to the scaffolding and layer blanks on us.”

Recently Jeff, who did not want to give his last name, a homeless man in Buffalo, New York lost both of his legs to frostbite. Luckily, someone found him before he died. Stories like this aren’t unfamiliar to Clemente.

“An acquaintance of mine passed out and urinated on himself,” he said. “The next morning he was dead, frozen to the sidewalk. They had to scrape him off.” 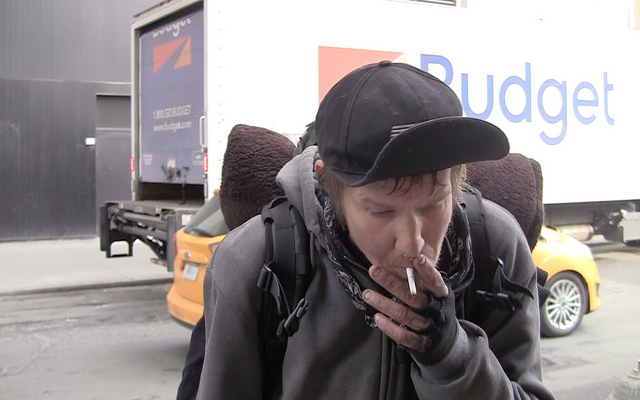 Nichols smokes a cigarette while explaining what he and his homeless friends are going to do to stay warm during this Valentines Day weekends icy weather outside of Starbucks Astor Place. Photo by Rakeesha Wrigley

Nichols, who did not give his last name, 32, is from Florida. After finding syringes in his bedroom drawer, his foster family kicked him out. He’s been homeless for 15 years.

“January 17th was negative 11 degrees and we had a whole camp set up with a tent, fire pit, and a wood burning stove,” Nichols said. “We just burned everything in sight. It’s actually a pretty mild winter compared to last winter. It hasn’t got too bad yet, I don’t think it’s going to get any worse.”