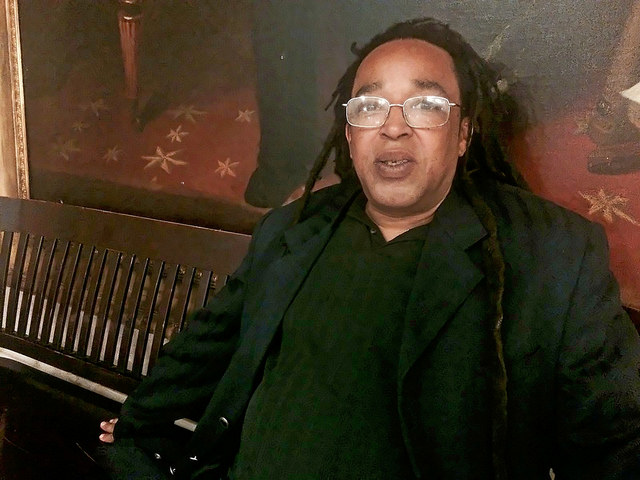 Sitting quietly by himself on a bench inside of Brooklyn’s Borough Hall, Abubaka Miller, 54, remembered and mourned the murder of his son 10 years ago. His son, gang member Tiamya Fortune, 25, was shot in the neck because of an on going gang dispute in front of Marcy Houses in Bedford Stuyvesant, Brooklyn on July 4, 2005. Miller, who was awakened by a phone call while asleep that evening, said it is a day he will never forget.

“A phone call came through saying they shot Mya,” Miller said solemnly. “I was pissed, I was upset and I really wanted to kill the guy [who killed him]. But you know what I had to say? Fair exchange is no robbery.”

Miller, once a gang member himself, said he came to accept his son’s death because his son was in a gang and understood the dangers.

“At times he had to go to his gun,” he said. And when he went to his gun, he might have succeeded, but it came the day when somebody pulled a gun on him.”

With gang violence increasing, Borough President Eric Adams and NYPD officials gathered yesterday at Brooklyn’s Borough Hall to speak with about 100 community residents on knowing the early signs of gang activity in their homes and neighborhoods.

“I’m hoping that we can start an initiative where we can give information out,” Adams said. “The more information we can get out there, the better we can be to combat this issue we call gang violence.”

Most recently, Carey Gabay, aid to Governor Andrew Cuomo died after being shot by a stray bullet earlier this month before the Brooklyn West Indian Day Parade. Police said the incident was gang related.

According to the NYPD, in North Brooklyn alone, there are 73 separate gangs. Some of those include newer gangs such as Hood Starz, Wave Gang, and Rockstarz. More traditional gang’s like Crips, Bloods, and Latin Kings are still active as well. Of 220 shootings, officials said that about 202 were due to gang motivated or gang related activity. Police said that 12 to 23 year olds are the most vulnerable to gang initiations.

Former gang member and now mentor at the organization Next Steps, Beloved, said that he used his past life to become a role model and open communication lines for the youth.

“Here I am talking to a young boy [in a hospital] and he’s telling me he’s been shot,” said Beloved. “So I walk out of the hospital and take my shirt off then come back in and say, ‘I’ve been shot five times and the dude that shot me, I shook hands with.’”

Martha Works, who serves at the 81st Precinct as the Community Council President ,said that the first step to solving the intensifying gang violence is by infiltrating schools. She said more educators should have been at the forum.

“If there is going to be a change in the development of young people’s minds, we need to let them know that they have opportunities and that they have choices. Officials have to get into the schools,” said Works.

The former substitute teacher said that educators and other community members need to unify and take action. She said she will be taking the information she learned back to the community.

“We have to stop saying what we are going to do and start doing it,” she said.

Gang violence is a reality for so many. This article does a good job at discussing the systemic cycles that affect gang participation and the fact that it can be alleviated through school/educators’ efforts.