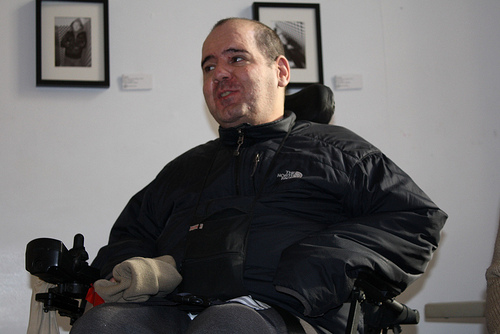 Anthony Trocchia, 44, facilitates the Disabled Queers of New York group once a month at The Center on 13th Street. Photo by Rajeev Dhir 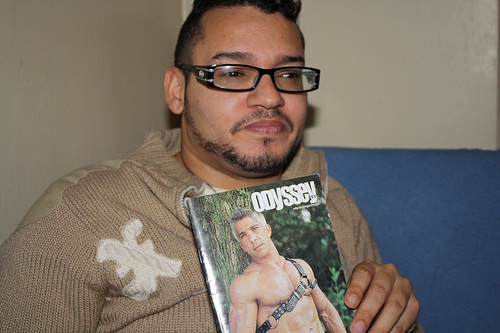 Danny Fred, 29, says he can’t fit into the mold of the stereotypical gay male presented on the front cover. Photo by Rajeev Dhir.

There’s an almost schoolboy like charm to Danny Fred. He’s got a very youthful face and it’s hard to believe he’s 29 years old. His eyes squint when he laughs, an infectious sound that echoes through the living room of his modest apartment in Jamaica, Queens.

Settling back into his sofa, he rested a leg on the seat, ready to open up about his upcoming date. He was excited – the two met on an online dating site. After speaking on the phone for about a week, they agreed to their first face-to-face meeting over the weekend.

“I’ve met a lot of guys in the bars. I’ve met guys talking on the phone,” said Fred, who’s a proud Puerto Rican-Italian. “But now I actually meet guys a lot of the time online.”

Talking to guys on the internet, he said, is easy, because it allows you to build up a persona and chat comfortably without any pressure. Meeting in person, though, is an ultimate goal. But there is something that always makes him a little nervous before every first date. Fred is disabled.

“I was born with cerebral palsy and I’m HIV-positive,” he said. “It isn’t easy being a gay man with a disability in New York City.”

That’s because Fred believes he isn’t what most people consider to be the stereotypical gay male. For decades, clean-cut, muscular Caucasian men have become the dominant image of what gay men look like in mainstream media, even though diversity is the focus at most Pride celebrations annually and gay men who don’t fit that image find themselves on the outside.

Because his disability causes Fred to walk with a slight limp and he takes retrovirals everyday for the HIV virus, he said he faces discrimination in his social, romantic and everyday lives.

Even though he’s embraced and accepted his disability, he tries to hide it by changing the way he dresses when he goes out in public so it won’t be noticed nearly as much. Even with something as invisible as the HIV virus, Fred said he’s felt the cold shoulder from other gay men.

“I’m fearful about what someone might say. Some gay men are like, oh no, I don’t want to catch it. Or oh, no, I don’t ever want a lover with HIV.”

Fred talks about being a gay man with a disability

Racial bias can also be problematic within the community, according to Dennis Chin, who came out while he attended the City College in New Jersey. The 29-year old said it’s even more apparent in the online dating world, where personal preferences can often isolate and segregate certain groups. Sites like Adam4Adam, Manhunt and smartphone apps like Grindr and Jackd allow users to post racial and physical preferences, with some men’s profiles advertising “no fems, no blacks, no Asians” and even “no fatties”. Chin said he was bombarded with these kinds of messages, which influenced his own personal perceptions when he first came out.

“In the early 80s and 90s and I think even now, the face of the gay movement is a white, buffed up male,” he said. “You identify with what’s available. You think of yourself as white. I didn’t think of other Asians as datable or desirable and that was really a reflection of myself.”

Chin on race in the LGBT community

Dennis Chin on race in the LGBT community

But some people aren’t surprised that gay people discriminate. The problems facing the LGBT community are just reflective of larger society, said Richard Rothstein, 65, who felt the isolation that came with the anti-Semetic rhetoric he said he grew up with during his childhood in Manhattan. Although it deeply affected him, he said, those experiences better equipped him to deal with prejudice within the gay community. 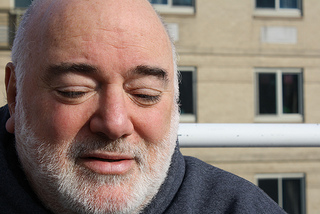 Richard Rothstein, 65, believes there’s no difference between discrimination in mainstream society and the LGBT community. Photo by Rajeev Dhir.

Rothstein, who came out at 40, overcame the challenges of living as a gay Jewish man in New York City, but still faces biases from the community at large. Ageism is rampant in the gay community, where stereotyping occurs against individuals based on their age groups. It isn’t uncommon in the gay community, he said, for younger men to be cast as submissive “twinks” or older men to be seen as “daddies”.

“My best friend is a 27-year-old straight man and when we go out we often catch heat about the sugar daddy nonsense,” he said. “Because why else would a man his age be with a man my age. It never occurs to people that we love each other, share some important common interests and have fun when we’re together.”

Rothstein on discrimination within the LGBT community

Richard Rothstein on discrimination within the LGBT community

Licensed clinical social worker Paul Hays said any oppressed minority, including the LGBT community, isn’t immune to the ills of the greater society. One way to handle that is to shun others (who aren’t part of the norm) for their differences. Being at the receiving end of discrimination of any kind, Hays said, can have a long lasting effect on someone’s emotional well being.

“You see examples of that everyday. Drug and alcohol use in our community is sky-high compared to other populations. Teen suicide, that’s what we’re hearing a lot about today,” said Hays. Treating gay people who suffer from problems like racism and other forms of discrimination, he said, comes by providing a safe and open spot to open up.

Advocacy groups like Audre Lorde Project have been working with LGBT and gender non-conforming people of color from all walks of life adjust to the realities of living in a diverse community to help fill in the gaps and provide community support.

“We are not mainstream. We are not like the big groups that do corporate service or have these support groups,” said Irma Bajar, ALP’s membership program coordinator. “So we don’t represent the Will and Grace or Ellen DeGeneres. In this particular space that ALP has created, there is no box, there is no ‘if you are a gay man that you look a certain way or your body is a certain shape’. There is none of that.”

Anthony Trocchia, 44, facilitates the Disabled Queers of New York group once a month at The Center on 13th Street. Photo by Rajeev Dhir

Rejection from the mainstream has also lead to an increased number of people reaching out to support groups for social networking. These groups often cater to niche communities, which represent a variety of racial minorities, physical abilities and personal interests. Anthony Trocchia, a 44-year old man with muscular dystrophy, started a support group for disabled gay men four years ago. Disabled Queers of New York (DQNY) offers a safe and open space for men of different abilities. Trocchia said the group has been a success, with at least a dozen members that meet once a month.

“It’s (being a gay man with a disability) is difficult,” said Trocchia, who has used a wheelchair for the last 33 years. “I wanted to create an environment where guys could meet each other.”

Gay Asian Pacific Islander Men of New York formed out of a gay men of color group in 1990 to meet the specific needs of a growing Asian and Pacific Islander community within the LGBT population of the city.

“There was a lot of discrimination in the mainstream gay clubs where black Latino and Asian folks would not be able to go into clubs and there would be regular racial bias,” said Chin, who’s the chair of GAPIMNY. “So that men of color group formed because there was this strong desire to talk about race and validate their own experiences as gay men of color.”

Although groups like DQNY and GAPIMNY provide a safe, open space for their members, some people believe they can have a harmful effect on minority groups they serve.

“Sometimes, that comes at the expense of just sectioning yourself off, rather than coming to the issue,” said Terry Purdue, 28, an African-American gay man who has also faced discrimination based on his race. “I understand being able to appreciate the black, white and Asian differences.”

Purdue said he would rather people confront prejudice rather than self-segregate, which is what Chin would like to see more of within the community.

“We need to have a conversation about how you deal with that (discrimination) in the larger context. Having conversations like ‘are you being racist?’ don’t go anywhere,” he said. But what does, Chin added, is breaking down the definitions of the stereotypical gay man. “And that has to come from within the community.”

Fred agreed, adding, breaking down those walls comes first from within. “It’s taken us years to be comfortable with ourselves,” he said. “No matter what I do, I’m always going to have this disability. I’m always going to be HIV-positive. And I can’t change that. I hope that once people get to know me, they can see past the physical form and look at the person in their heart.”