Gay hockey association builds support and friendships on the ice 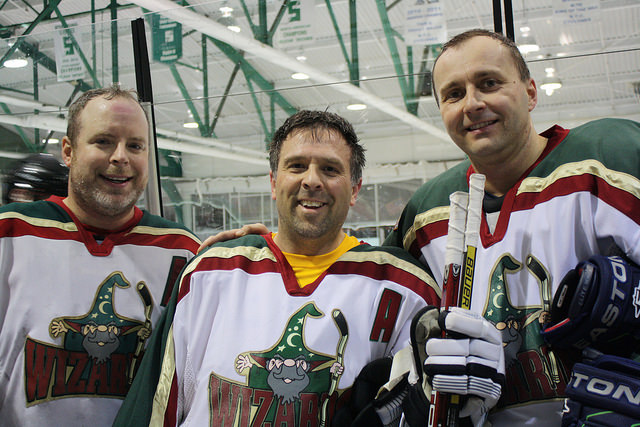 Players trickled in to Sky Rink at Chelsea Piers in Manhattan on a recent Saturday night, lugging hockey bags into revolving doors of locker rooms. Men and women draped in thick pads, standing on skates, stood in line at the water fountain, preparing for games on either two rinks.

Some of the players are gay.

When the New York City Gay Hockey Association first started, opponent players would yell out “fag” on the ice. It was more than the expected high-sticking, roughing and swearing that heated games bring out in players.

“Like a bunch of nancy, faggoty boys playing on the ice, and you know what, we have a few of those,” said former board member and current Wizards alternate captain, Robb Riedel. “And we can queen out as much as anyone else. … [But] once you’re on the ice you’re playing. Even if someone is more feminine, they’re still playing just as hard and shooting just as hard.”

Director Jeff Kagan founded the New York City Gay Hockey Association (NYCGHA), the state’s first official gay hockey organization, in 1999. He was moved to create the gay-friendly association after he and another player, in a former league, realized that each other were gay, but not out.

The NYCGHA< is one of many lesbian, gay, bisexual and transgender organizations that have sprouted in New York City. In the 16 years since its establishment, its philosophy has remained that anyone is welcome, and players have stuck around for the love of hockey and to share in friendship.

“Part of the thing was you couldn’t find 15 gay guys [in 1999] that played hockey to build a team,” said Riedel. “So really it was open to whoever wanted to play.”

Seven teams of both men and women, gay and straight, compete in four different skill divisions within the Chelsea Piers adult ice hockey league ranging from division 1 (advanced) to development (beginner). Players pay a $650 fee at the start of the season in September and the association pays a team fee to Sky Rink. All seven teams have roughly 15 players.

The games are free. Most of the audience consists of player’s spouses, although all don’t always show. On Saturday night, three people watched from the plastic bleachers.

Green high beams and dozens of fluorescent lights hanging from the ceiling shone brightly on the scraped-up ice. A Zamboni, an ice-resurfacing machine, wasn’t in sight and the national anthem wasn’t about to boom through speakers, but as 8:30 p.m. approached, players were skating, stretching and strategizing. Division 7b rival, the Thundercats (6-5), presumably, were questioning whether they would be able to upset the Wizards’ 13-0 season.

Riedel, 40, is gay. The magazine editor joined the association in 2003 after 10 years off the ice. Growing up skating competitively in New Hampshire, he said he stopped at the age of 15 because he didn’t feel aggressive enough and was shying away from the sport.

Part of him was buying into gay stereotypes. He said that through the media and television two decades ago, gay men and women were stereotyped as feminine. When it came to sports, especially, they were clumsy, not talented and not aggressive.

“I sort of felt like that as a kid,” Riedel said.

It took him a year to join the NYCGHA.

“I found coming back as an adult, my mindset had totally changed, and I’m just as aggressive as everyone else out there,” he said.

Vince Aita, 41, the Wizards’ straight captain, began playing hockey late in life. He always loved watching the sport as a kid, but realized that not knowing how to skate and play wasn’t an excuse. He started skating lessons at the Piers for a year, contacted lower division teams and Kagan responded. Aita’s been on the Wizards for nearly eight seasons.

“It was kind of mentioned immediately up front that it was part of the gay hockey association, but I think the thing that was kind of funny about it from the get-go was orientation was never a question from start to finish on either my side or on Jeff’s side,” Aita said. “I think part of being a very gay-friendly environment is that it’s not gay. It is gay-friendly.”

“I didn’t have many other older gay friends, and now I do,” said Baer, 45. “And that’s through hockey. Whether they’re gay or not, that doesn’t make a difference. Now I have some people that I can relate to a little bit better.”

Gay and straight, players stood in position as the puck dropped at center ice. Riedel pushed alongside four teammates donning red, white, gold and green uniforms. Every time the puck was slapped, a player was slammed into the boards and skates suddenly reversed direction, noise echoed through the arena.

After a steady back and forth, Mark Checkosky’s shot found the net around the 11th minute in the first period, giving the Wizards a 1-0 lead. As the buzzer drained, there was no intermission, but rather, players began the second period on carved ice.

The Thundercats spoiled the Wizards’ 1-0 lead with a game-tying goal near the 12-minute marker in the second period, intensifying a thirst for winning.

Nearing the final few minutes with a tied game it looked as if it were heading into overtime until Checkosky scored the Wizards’ game-winner, bumping their streak to 14-0.

Riedel said he believes the goal of the NYCGHA is actually to run itself out of existence and that there needn’t be a gay hockey team. Though he’s looking forward to the playoffs through early March.

“[You hope] that attitudes have changed enough that you wouldn’t need it and I think we’re headed in that direction,” he said. “You’ll have everyone from an attorney to a plumber, who would never meet in real life otherwise, and every Saturday night we come play hockey and then go drink at a bar.”

Around 10:45 p.m. that’s just what some of the Wizards did. Heavy gear strapped over their shoulders, they rode the elevator down to the parking garage, tossed their sticks and skates in the car, and headed for a round of celebratory drinks, preparing to stay until last call.