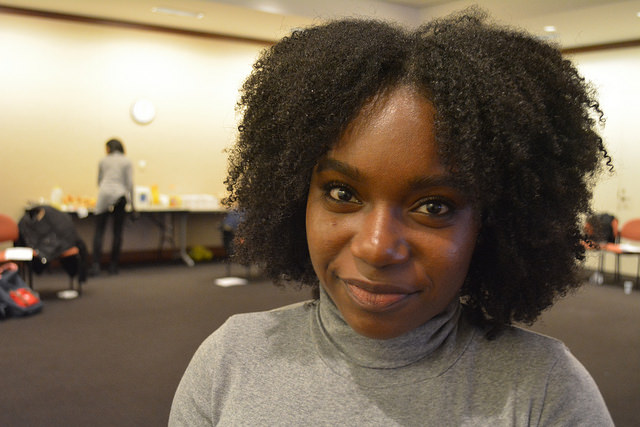 Alexandra August, 18, embraced her natural hair two years ago and has loved it ever since. Photo by Virginia Gunawan.

“Good hair” or “bad hair”, many African American women are tangled in society’s perception of how they should wear their hair. When “good hair” means enduring the burning, unpleasant smelling relaxer crème or flat iron and “bad hair” means letting it grow naturally, with worries about conservative employers, which do they choose?

“We take our hair really seriously because it’s more than just hair. It’s a part of our identity,” said Beneque Cousin, 28, of Williamsburg, Brooklyn. “Black women spend more on their hair than anyone by a very large margin.”

For Cousin, her hairstyles show her eclectic personality. She has had it natural, long, short, pixie short, weaved, relaxed, and two weeks ago, the public policy student at NYU decided that she wanted to have box braid. Box braids incorporates synthetic braiding hair with natural hair giving an opportunity to extend her natural hair. This hairstyle is popular because of its low maintenance and protects the natural hair.

In 2014, Mintel, a market research firm, estimated that the market value of hair products targeted for African American consumers was worth $774 million, an increase of 12 percent from 2009. If the selling track continues, by 2019 the market for African American hair care will reach $876 million. But the whopping escalation of the market was not proportionate in hair relaxer, the only category not to see growth. In 2013, hair relaxer sales declined 28 percent since 2008, down from $260 million to estimate $152 million.

“I had it relaxed since I was in the third grade, so I was always kind of used to having straight hair,” said Alexandra August, 18, of Greenwich Village. “I never really knew what my curl pattern looked like.”

August took a huge step and decided to embrace her natural hair two years ago. It was a lengthy and effortful transitioning period when she had to straighten her hair every day, wear extension and regularly cut off the relaxed part of her hair. The Long Island native defined her current hairstyle as ‘wash and go.’ She literally washes her hair and she is ready to go. No more chemicals, no more ‘creamy crack’ as relaxer crème is sometimes referred to.

Despite the natural hair trend and its capability of shifting the market, some societies and work environment might still be unable to grasp the idea.

“A lot of African American women want to, kind of either, wear their hair straight or perm… relaxed, because of work,” said Audrey Pray Jr., 22. “We make a lot of decisions based on work.”

Last September, the Army released an updated appearance and grooming policy after being criticized by the African American service members. Before, hairstyles like cornrows, braids, twists and dreadlocks were strictly regulated or even bleakly unauthorized for women in the military. On the updated version of the policy, dreadlocks remain unapproved, but the Army removed the word “unkempt” and “matted” in describing them as it were deemed as offensive and insensitive.

Pray had her hair locked 15 years ago, when she was still in the first grade. Her style guru was her mother. Pray’s mother has been wearing locks for as long as Pray can remember. One day, when Pray was seven, she asked her mother to, “hook me up” with the locks hairstyle. So her mother locked her and her sister’s hair.

But in the 1990s, locks were part of hippie counterculture and the girls in her school in Maryland have never seen anyone with locks before. So, Pray was teased.

“They called it all types of names like ‘do-do twist’; some people thought I had a wig on. It was hard,” said the Upper West Side resident. “I even got into a fight on the first week of my middle school because someone was picking on my hair. I’ve been through a lot with my hair.”

Now, Pray is fine. A production associate for content development at Nickelodeon, she is working in an area where creativity is encouraged. Amusingly, Pray has been asked for advice on how to grow hair naturally and maintaining her hip length dreadlocks. She admitted pop culture has much to do with the popularity of dreadlocks.

“I would say to my younger self that ‘you are going to be a pioneer on something fantastic in the future.’” as her fingers ran through her locks. “So don’t trip about them.”