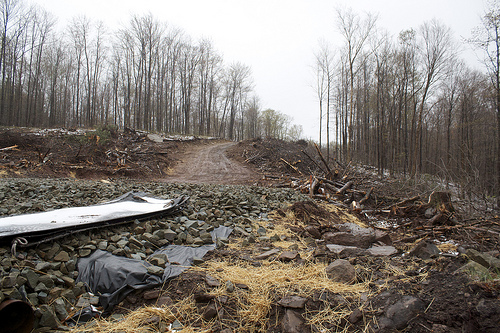 Fracking companies routinely plow plots of land in order to run pipelines through the countryside. Here a clearing in the mountains of Sullivan County, Pa Photo by Eric Zerkel

For Saxton and Young, life in Moreland Township is a labor of love, 25-years of dedication to perfect their dream bed and breakfast, each log, each stone, each building hand built over-time; a place where they could retire to the unspoiled serenity of central Pennsylvania.

That is until the methane gas from the nearby hydraulic fracturing well seeped into their drinking water, rendering it unusable and threatened to end their business. Dangerous levels of the cancer causing gas radon followed, with levels jumping to over 23 picocuries per liter, more than 6 times the safe limit suggested by the Environmental Protection Agency.

“This took us 25 years to build, and it could all be gone,” said Saxton, 64 as he recounted the 14 years he and Andrea spent living in a rehashed chicken coop as they worked on their house. “Once the water is gone, my property is worthless, just like that,” he said.

Saxton and Young are just one example of many Pennsylvanians who have been dealing with the negative side effects of the boom of hydraulic fracturing or “fracking,” – a process for harvesting natural gas. Their experiences have left them politically dejected, and now they find themselves outcasts in the middle of a hot environmental debate that could boil over in the upcoming presidential election.

“We have told state legislators, we have lobbied their offices, but there is no use in telling them because they have already been told again and again,” Saxton said.

All along the Pennsylvania countryside pads are cut into the forested areas, breaking up the continuity of oaks and birches with the dull rumble of drills, compression pumps and other equipment necessary to tap the gas-rich Marcellus Shale formation below ground. 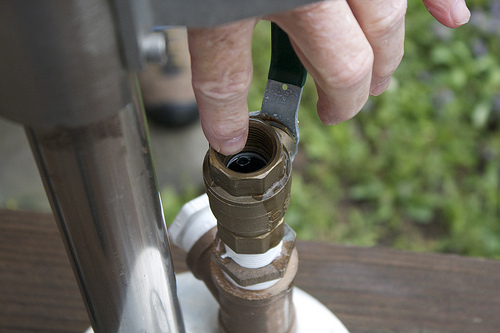 Drake Saxton indicates how contaminates get into his well water. Photo by Eric Zerkel

“We are in the sacrifice zone, said Ralph Kisberg, 56, a native of Lycoming County. “The rights of people are secondary to what the country wants to do.”

In many cases, access to these drill sites is proprietary, and the mineral rights are exclusive to the property owner. As a result, gas companies with names like Anadarko and XTO send “land men” to knock on the doors of the farmhouses and old Victorians that dot the landscape, offering exorbitant amounts of money for leased mineral rights to their land.

The minimum gas royalty in Pennsylvania is 12.5 percent of all the gas taken from the wellhead. Simply put, the more gas pumped out, the more money a landowner can collect, sometimes into the millions.

“It’s not unusual to see that,” Kisberg said, as he pointed out a sheen green tin roof atop a dilapidated old farmhouse, just feet away from a drill site. “People around here are poor, so when they get their check from leasing their land they run out and by new roofs, new trucks, things they never dreamed of affording.”

Kisberg is the president of Responsible Drilling Alliance, an organization that aims to educate Lycoming County residents on the potential consequences of shale gas drilling. Kisberg, like many others, leased his mineral rights to his property north of Williamsport.

“The land owners, they are all in on it, including myself,” said Kisberg. “They are all rubbing their hands together while they count their royalties.”

But John Trallo, 60, never wanted in. His home, located in the heart of Sonestown in nearby Sullivan County, was supposed to be a refuge from the environmental hazards that marred his past. The wife of his four children died at the age of 42, Trallo said, due to cancer directly related to exposure to the pesticide DDT, sprayed across the farms of his former residence just outside Philadelphia.

“I wanted to get away from the pollution,” said Trallo. “Sullivan County is called ‘the gem of the endless mountains’ for a reason; it’s supposed to be dedicated to preserving that beauty, that peace and quiet.”

Now the land Trallo sought refuge in, has turned against him.

“When you turn on your faucet and what comes out looks like chocolate and smells like diesel fuel, it’s easy to see something’s not right,” said Trallo.

Trallo said he hasn’t had potable water in over 15 months. He said his water source had been contaminated by leaking gas from a fracking well atop North Mountain, just a half mile behind his house. Tests on his water showed shocking results, traces of methane, barium, strontium and arsenic were flowing out of his tap.

“Fracking companies have done more than just change the land, Trallo said. “They have completely transformed it.”

Trallo’s home sits well outside the 2,500-foot zone of “presumed liability” that forces gas companies to assume responsibility for any negative effects of tapping the wells, which he said has left him with few political options.

“I don’t think there is a political solution,” said Trallo. “As long as they (politicians) don’t have to stand in someone’s kitchen and watch as someone lights brown liquid coming out of a faucet on fire, they can deny it.”

Trallo said he had exhausted the same options as Saxton, and was so frustrated with the political climate that he planned on throwing his hat into the political arena, writing himself in as a representative of the 110th District of Pennsylvania.

“I don’t care if I win or lose the election,” said Trallo. “If I can just get people to understand the effects of this industry, that’s all I want.”

On the back deck of his bed and breakfast Drake Saxton stood, staring out over the shallow banks of Little Muncy Creek.

“It’s beautiful, isn’t it,” he said with a somber smile. 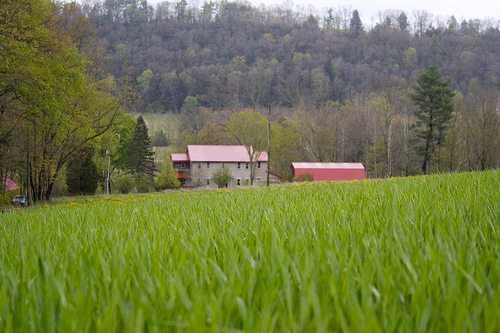 View from the hill overlooking Drake and Andrea Saxton's Bed and Breakfast. Mr. Sexton said he recently learned that a gas company plans to drill atop the hill, potentially threatening his drinking water. Photo by Eric Zerkel

For the first time the Pennsylvania wilderness offered no refuge.

“No matter who we vote for we run the risk of losing all of this,” said Saxton. “When does it end, and who helps us? No one.”