Eco-friendly products may not be so different 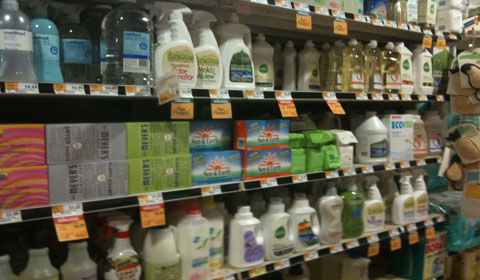 Household cleaning products have arrived on the green scene.

But for eco-cleaners it takes some green to go green. All-purpose cleaners at six dollars and $12 a pop for laundry detergent means consumers are paying more for products that experts say may not be that different from their Clorox counterparts.

“I just bit the bullet and bought my very first bottle of $12 eco-friendly laundry detergent,” said Sarah Drew, 25, an anthropology major at the University of Georgia.

Like many college students, Drew lives on a tight budget.  She has to balance her eco-conscience with limited finances.  Her $12 bottle of Seventh Generation laundry detergent promises to be non-toxic and biodegradable.  But the Environmental Protection Agency says these terms are vague and unregulated by the government.  In fact non-toxic has no official definition or third party verification.  Biodegradable can be just as unclear.

Mark Chapman, 30, a professor of plant biology at the University of Georgia, said anything organic – that is anything made up of carbon, hydrogen, and oxygen – will break down over time.

“Usually ‘biodegradable’ means it will degrade over a much shorter time than, say a regular plastic bottle,” he said.  “So if I bought something made of biodegradable plastic I’d expect it not to be in a landfill for a gazillion years.”

Currently, even if a product and it’s packaging take a gazillion years to break down it can still be labeled biodegradable.

Wary of the chemical quagmire in most cleaning products, Americans are turning to eco-cleaners.  Most household cleaners contain harmful volatile organic compounds (VOC’s) that vaporize into the air and can pollute the soil and water as well as cause serious respiratory problems, according to the EPA.

But Chapman, originally from England, said that there are even more natural alternatives to commercial eco-cleaners.

“The best way to clean windows is scrunched up newspaper and vinegar,” he said.

“You can have it on your fish and chips too – double the fun.”

Vinegar is an earth-friendly and inexpensive household item that can be used for most cleaning tasks; and, as Chapman noted, it is not harmful if swallowed.

With vinegar, baking soda, lemon juice, and some warm water you can tackle just about any household chore:

• Distilled white vinegar can clean and deodorize any surface including, refrigerators and microwaves.

• A mix of vinegar and baking soda unclogs drains and garbage disposals.

• Baking soda adds the benefit of grit for surfaces that need extra scrubbing.

• Baking soda also lifts stains out of carpets and many fabrics.

• Lemon dissolves soap scum and hard water deposits in the bathroom and eliminates odors; and it great for dishes too.

These three products provide an excellent alternative to expensive commercial cleaners.  Ben Garland, 31, a graduate student at North Carolina State University uses the trio regularly for his cleaning needs.  He and his fiancée, Laura Bentz, make a conscious effort to limit their use of harsh chemicals.

“Basically, we try to cut out any of the conventional cleaning products that have ingredients that you can’t pronounce,” he said. “We’re transitioning to stuff we make on our own.”

Garland said his concerns are for his personal health and for the environment.

“I want to know when I put something down the drain that if it does end up in a river that it’s not going to be very harmful,” he said.

Garland said the biggest disadvantage to their homemade cleaning concoctions is that it may take a little extra elbow grease to remove tough stains; but sometimes the homemade stuff works better than the commercial product.

The couple has been on a mission for nearly two years to live a more sustainable lifestyle- that means cutting back on all the products they consume.  Their mission so far has proved easy on the earth and easy on their wallets.

Garland also made his own laundry detergent from Ivory soap, Borax, and washing soda.

“I didn’t like detergents because I would get itchy from the detergent residue left on my clothes after washing them,” he said “And they are more expensive than making it myself.”

His homemade detergent only costs two cents per load.  By his estimates, over the course of a year he will spend only 75 cents to a dollar on laundry.

Garland and Bentz also stopped using paper towels and have had the same roll of paper towels sitting around for eight months. They replaced them with dishrags and cloth napkins to save money and help ease deforestation.

Recycled paper products are another sustainable option.  According to the National Resources Defense Council, if every household replaced just one roll of regular paper towels with a roll of recycled paper towels, we could save 544,000 trees.

“The point of what we’re doing is ‘getting back to the land’ and looking at what our grandparents did that we are no longer doing as a society,” said Garland’s fiancée, Bentz.

Love your blog, even though coming from me, the guy who loves everything green, it probably doesn’t mean all that much! Anyway to a greener 2010!

Hi, you made very good effort to make this knowledge full post, your post provide me some great information about the topic above written. You keep all things around a central topic this increase my interest , you did amazing work .

If you’re interested in having a guest blog poster please reply and let me know. I can provide unique content for your blog, thanks.

Coming across this site, I was shocked by the quality of info anyone would discover it extremely to be of benefit also, I will be spreading the word. Thanks

Y’know I’m inclined to disagree with you on this one, I think it’s awful, but then again, different strokes for different folks!

Brilliant post thanks, all the best. I really like reading this blog, it has a great position on my favourites bar!

Thanks for the information! I personally really appreciate your post. This is a great website. I will make sure that I stop back again!.

Excellent Article! I personally really appreciate your article. This is a great website. I will make sure that I stop back again!.

Hello. Great job, if I wasn’t so busy with my school work I read your whole site. Thanks!

Cool! looking forward to more entries from you..

Valuable thoughts and advices. I read your topic with great interest.

Excellent post I must say.. Simple but yet entertaining and engaging.. Keep up the awesome work!

This is a great blog you got here. The theme looks nice, awesome color combination.

You made some good points there. I did a search on the topic and found most people will agree with your blog.

Great site, check out mine!

I couldn’t agree more! I was searching on bing when I found your post, and I found just what I was looking for. I’ve added your rss feed to my Google reader, I look forward to more posts from you. Thanks!

Great post, I bet a lot of work and research went into this article.

Yes! thought your post is a really nice read!

Stumbled into this site by chance but I’m sure glad I clicked on that link. You definitely answered all the questions I’ve been dying to answer for some time now. Will definitely come back for more of this. Thank you so much

I bookmarked this link. Thank you for good job!

All the guidelines given in this blog are good. I want to thank you for having the time to write this post. I definitely wanted some information like this. Continue the great work!

Hi There! I ran into your site absolutely by mistake, and it turned out to being a blessing. You bring a lot of interesting things to the table and I will be back for more 🙂 Thanks!

Very interesting post thank you for writing it I just added your website to my favorites and will be back.

I’ve been reading through your site. You have some interesting posts on here, especially this one – I really liked it…nice post. Consider yourself bookmarked

It is simple to see that you are serious about your writing. Cheers!

Good blog, some amusing details. I believe seven of days ago, I have viewed a similar article. Does anyone know how to track future posts?

Thanks for sharing, great site and keep it up. I will be back!

I’ve bookmarked this because I found it interesting. I would be very interested to hear more info on this. Cheers!

Because of reading your blog, I decided to start my own. I had never been interested in keeping a blog until I saw how interesting yours was, then I was inspired!

Thank you guys, I love this place, you have put a lot of work into it as I see, awesome… good work mods.

Thank you for this wonderfull blog, I have been lurking for some time, many thanks to the Admin here too.

Hey, That’s wonderful i got alot of links from your site I got your site helpful.

Just wanted to say you have a great site and thanks for posting!

My friend referred me to your blog, so I thought I’d come have a read. Very interesting material, will be back for more!

It is always pleasure to read your site, will back here soon

Great sit, I really enjoyed this post. Keep up the good work!