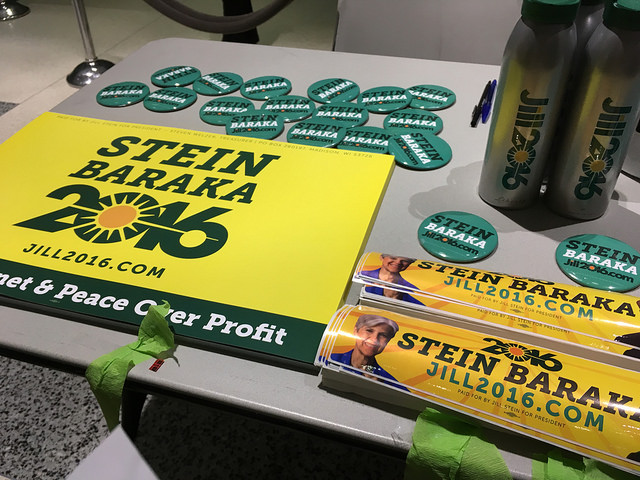 Bumper stickers, fliers, pins and other campaign paraphernalia lay on a table in the lobby of the Hostos Community College arts center in the South Bronx during a Jill Stein rally yesterday. Around 150 people rallied in support of the Green Party at the college’s arts center where Stein pitched herself as an alternative to the Republican and Democratic candidates for the presidency. Photo by Razi Syed.

Around 150 people rallied for the Green Party in the South Bronx Wednesday night where nominee Jill Stein pitched herself as an alternative to the “greater evil and the lesser evil” candidates in the 2016 presidential election.

“We’re looking at Hillary Clinton, who wants to start an air war with Russia over Syria, said Stein at the Hostos Community College Arts Center in the South Bronx. “We are looking at a climate which is in meltdown. One candidate believes in climate change, the other one doesn’t, but both of their policies will destroy the planet, so it doesn’t matter so much what you believe, it matters what you do.”
Stein’s running mate and human rights activist Ajamu Baraka and New York Senate candidate Robin Laverne Wilson were also at the rally.

Faye Gotlieb, 27, of St. George, Staten Island, said she had mainly been a Democrat supporter over the years, but felt she could no longer support the party when Bernie Sanders conceded the primary election.

“I feel like I can’t support Hillary Clinton based on her history and her policies,” she said. “I would like a better alternative—at this point, I think Jill Stein is actually the strongest candidate running, and the most progressive candidate running.”

Stein was not included in the debates because her national polling average of roughly 3 percent did not meet the 15 percent threshold set by the Commission on Presidential Debates.

Political cartoonist Eliot Crown, of the East Village, said he believed the Republican and Democratic parties were conspiring to keep Stein from having a legitimate shot at winning the election, pointing to the fact that Stein was not included in the presidential debates.
Crown said Stein was a needed alternative to the other parties, which he alleged are driven by corporate interests.

Bumper stickers, fliers, pins and other campaign paraphernalia lay on a table in the lobby of the Hostos Community College arts center in the South Bronx during a Jill Stein rally yesterday. Around 150 people rallied in support of the Green Party at the college’s arts center where Stein pitched herself as an alternative to the Republican and Democratic candidates for the presidency. Photo by Razi Syed.

The Stein/Baraka ticket is on the ballot in 44 states, and the District of Columbia. The candidates qualified for write-in status in three additional states, which brings the number of states where voters can cast their ballot in support of the Green Party to 47.

“We’re looking at a crisis of immigration,” she said. “Donald Trump has said bar the gates to Muslims, but Hillary Clinton supported that policy towards Latinos. And the Democrats have been the party of deportation, detention and night raids.”

Paul Gilman, 57, of the South Bronx, is a spokesman for the New York Green Party on drug policy and was outside of the Hostos arts center demonstrating for the legalization of marijuana prior to the start of the rally.

Gilman said drug policy was one issue that was connected to other social and racial problems.

“As as the drug war itself, we’re totally aware of Black Lives Matter and what I call “the Michelle Alexander paradigm” of slavery to Jim Crow to the drug war,” Gilman said. “Once Jim Crow was collapsing, they reinvested in the drug war as a way of disenfranchising blacks, and some Latinos, but mostly blacks. They can’t vote; they lose their gun rights”

Asked how she responded to those who called her campaign a spoiler for the major progressive candidate in the race, Stein said abolitionist parties that stood up against slavery were also called spoiler parties.

“The establishment uses that name for anything they don’t like.” she said. “Right now we are looking at a race to the bottom between the greater evil and the lesser evil political parties.”

The Bartons’ plans to sell the Noe Pond Club represents more than just the end of a historic family business founded in 1955.

It is unclear whether or not the individual’s motive was in direct retaliation to Whitmer's executive orders concerning the pandemic but the story is still developing.