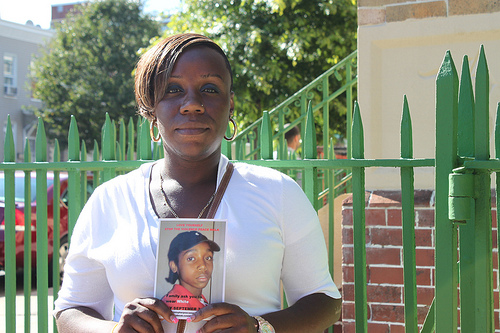 Three blocks away from Evergreen Baptist Church, the site of yesterday’s Bushwick gun buyback event, Akeal Christopher, 14, was shot in the head after a middle school graduation party. He died on his 15th birthday this July.

“My son was murdered in the community he grew up in,” said his mother, Natasha Christopher. “This community is on mute and everyone is acting like this is a normal. This community should be mad.”

But yesterday’s gun buyback event, in the church at 455 Evergreen Avenue, was organized in response to the burgeoning number of homicides and gun violence in the Bushwick community.

According to the New York Police Department January to June 2012, 791 people were shot or killed by a bullet, 1613 total arrests were made in which at least one firearm was recovered. The 83rd Precinct, which covers Bushwick, had two fatal shootings over the last month.

The gun buyback event was sponsored by City Councilwoman Diana Reyna in conjunction with the police department and hosted by the Evergreen Baptist Church. 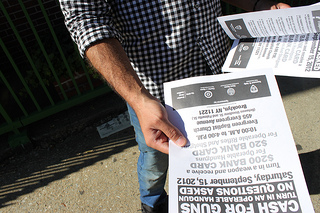 Community Organizer Ariel Salazar hands out flyers and speaks to residents as they pass by Evergreen Baptist. Photo by Gabrielle Wright.

Flyers were handed out as far as 15 blocks in each direction to persuade community members to hand over their guns. The incentive was $20 for rifles and $200 for pistols and handguns. By 4 PM, the gun buyback collected 85 firearms.
As community members turned over their weapons, police officers stood by to collect them.

“In reality the people who are bringing the guns in aren’t the people most likely to use them in the wrong way,” said the church’s pastor Rev. Gary Frost. “If the guns are in their homes, there are others there who are less conscientious of proper use of a gun or would probably steal them. If you take the guns out of circulation, it’s a better environment.”

Some of the guns that went out of circulation were carried into the church in duffle bags.

“Some of these weapons are like military equipment,” said Frost.

Others brought weapons concealed in small tote bags, and purses. One man stopped a few yards away from the church. He asked church member Anita Haynes if she would turn in a plastic grocery bag half full of bullets for him.

When Rev. Frost watched the exchange, he said he believed the buyback event was like one person on a shore covered with thousands of starfish.

“You can’t save them all, but you can save this one,” he said. 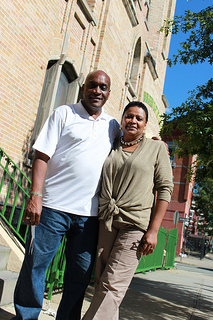 Lynette Frost, the pastor’s wife, recalled a moment this summer when tears prevented gun crime. She called out to two teenagers running towards a fight asking them not to make their mothers cry that night.

“And the boys, they came back,” Lynette Frost said. “They asked me why I cared and I said, ‘because I love you’. They started to tear up and didn’t fight that night. That’s what we’re doing here today.”

Lynette Frost said that this year’s turnout was an improvement. Last year only 32 guns were collected. Out of the 85 guns collected this year were 74 handguns, 4 shotguns, 6 rifles, and 1 assault rifle.

Ariel Salazar, Councilmember Diana Reyna’s Community Liaison, said that the very last weapon collected was brought in by two teenagers. It was a Tech-9.

“The police department was very excited about receiving this specific weapon,” said Salazar. “It’s the one that could have done the most damage.”

[…] read on Pavement Pieces “My son was murdered in the community he grew up in,” – Natasha Christopher, mother of slain 14 year old Akeal Christopher, holds his picture. Photo by Gabrielle Wright […]

[…] more of my Pavement Pieces article, “Gun buyback event in Bushwick nets 85 weapons“ via my […]