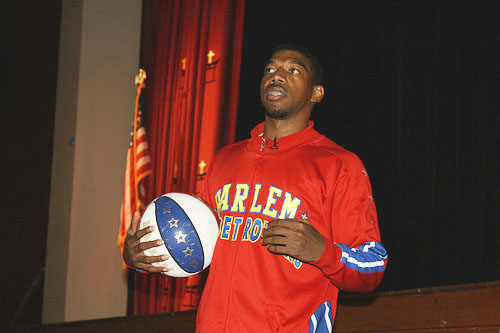 You’d never guess it by his confident smile, 6’2” stature, and impressive basketball tricks, but Buckets Blakes was bullied as a kid. Now, he’s on a mission to stop the same thing from happening to New York City schoolchildren.

Anthony “Buckets” Blakes, 36, plays point guard and shooting guard for the Harlem Globetrotters. He has teamed up with the National Campaign to Stop Violence to present “The ABCs of Bullying Prevention,” a community outreach program directed at students in Brooklyn and Queens. This morning, he spoke to around 400 students in the auditorium of Bishop Ford High School, near Prospect Park in Brooklyn. Students from nearby St. Joseph the Worker Catholic Academy, and from P.S. 50 in Jamaica, Queens, were also in attendance.

Children in the audience said bullying was a problem in their schools.

“A kid would bully another kid, just by the way they looked, or the way they dressed,” said Jeremy Caraballo, 10, a fifth grader at PS 50. “They would tease them, they would pick on them.”

Andy Valle, 10, also in the fifth grade at PS 50, remembered an instance of racial bullying at school.

“In school, one of my classmates was in a fight just ‘cause this bully named him,” he said. “[It was because] he was black, and how his skin color looked like.” 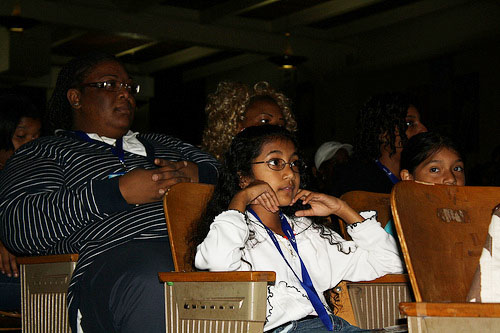 Saudia Kahn, 9, of PS 50, attentively watches “Buckets” Blakes. Saudia said that she had been bullied in school. Photo by Jordyn Taylor

Saudia Kahn, 9, a student at PS 50, was a victim of bullying herself. She said she wished bullies would just leave her alone.

“I get pushed down sometimes,” she said. “I don’t know who’s doing it. I just get a little hurt, but I don’t care. I just walk away. ‘Cause I don’t wanna get in much trouble. I wish [the bullies] would change a little bit. Other kids could get really hurt.”

During his animated speech, Blakes informed students about “The ABCs of Bullying Prevention”: A, for action; B, for bravery; and C, for compassion. He illustrated the lesson by sharing his own challenges with bullying, and explaining how he overcame them.

“I’ve been bullied before, and I just walk away,” Blakes said. “I was always that happy, smiling kid at school, so the bully that we had at our school, he didn’t like me very much. [Bullies] wanna take the power of your happiness away from you. You can be brave by walking away. You can also be brave by not participating in talking behind someone’s back, or spreading gossip and rumors about somebody.”

Blakes also urged the kids to show compassion and to ally themselves with the bullying victims.

“Having compassion for someone that’s been bullied is about trying to make that person your new friend,” said Blakes. “Or, you could just ask that particular person to sit down and have lunch with you for that day. For those five minutes of your compassion, you’ve changed their life. You brought their happiness back that that bully tried to take away from them.”

To finish the session, Blakes explained why basketball – and life – works better without bullying, and when everybody gets along.

“You’ll find out that you guys are more alike than you are different,” said Blakes. “You’re always gonna have to deal with someone, so you might as well learn to work well with each other. And that’s why the Globetrotters are so unique on the basketball court – ‘cause everybody’s on the same page. There’s no one big star. We’re all a piece of a huge puzzle.”