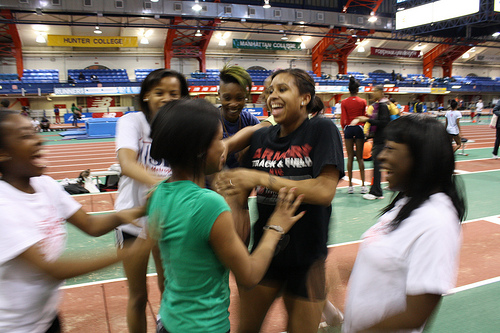 Charmaine Delotch, 18, center, laughs with her track teammates at practice in March 2011. Paul Robeson High School in Brooklyn is one of 23 city schools set to phase-out this fall, which will slash funding for after school sports. Photo by Rachel Ohm

The phase-out will apply to 23 other city schools this fall—and slashing resources, allocated based on student enrollment, could threaten sports teams and other afterschool activities.

According to the Department of Education educational impact statement on the proposed phase-out, “Robeson would continue offering student athletics and other extracurricular programs options, but the number and range of programs offered may gradually diminish due to declining student enrollment as the school phases out.”

Horace Sutherland, a track coach at Paul Robeson for 21 years, said that without incoming freshmen, the team has little room for growth.

“If you are not able to recruit any freshmen, the team starts to fall apart without the numbers to support it,” he said.

The decision to close Paul Robeson was first introduced by the Panel in 2009; but because of a lawsuit brought forth by the NAACP and the teacher’s union, the school has remained open.

Still, there are only 30 students in Paul Robeson’s upcoming freshmen class, which is much smaller than this year’s graduating class of about 100 students.

The Public School Athletic Association rules dictate that a team must have at least 12 people on the roster to participate in competition. There are 13 girls on the Paul Robeson track team this year but six of them are seniors.

Of those six, five have been recruited by colleges and three were offered scholarships.

“I cannot recall a student who joined the team and who did not go on to college,” said Sutherland. “We have had a lot of students; hundreds of them have gotten track scholarships.”

With the future of sports teams compromised, many students at phase-out high schools feel they are losing a valuable resource.

“There are kids there in the middle of an education and to try to relocate them is an enormous challenge,” he said. “Second of all, its very hard to start a new, effective school. Its hard to build a new and different culture.”

One possible solution is combining phase-out school teams with teams at new schools. Right now, there are two schools –The Academy of Health Sciences and a new specialized school called Pathways in Technology—looking to move into the Paul Robeson building.

While a co-location could keep Paul Robeson’s track team alive, it can only do so much for school spirit.

“It’s going to be pretty tough if [Paul Robeson] phases out because I would like to see my graduating class and what they’re up to and have a reunion with them,” said Shernika Paul, 17, a senior at the school and track team member. “I guess that wont be happening. I would also like to come back and share my stories with future students at Paul Robeson but that’s not going to be happening.”