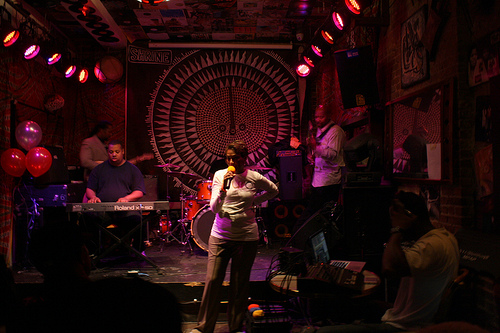 Maria Davis hosts M.A.D. Wednesday's, an event held on the second Wednesday of every month to feature new artists and raise awareness about HIV/AIDS in the African-American community. Photo by Jasmine Brown.

Beau Bostic stepped onto the stage of a Harlem nightclub with the swag of a hip-hop artist. In a spotless oversized white T-shirt and baseball cap, Bostic grasped the microphone and began to spit out lyrics about the trials of street life. At the front door, patrons paid a $10 cover charge and picked up free condoms.

Bostic is just one of the half-dozen artists featured recently as part of “M.A.D. Wednesday’s,” a show held on the second Wednesday of every month at the Shrine World Music Venue at 2271 Adam Clayton Powell Jr Blvd. in Harlem to raise awareness about HIV/AIDS in the African-American community.

Maria Davis, 51, an AIDS/HIV activist who hosts the monthly event, started M.A.D. Wednesday’s in the 1990s to provide a space where young R&B and hip-hop singers and comedians could hone their skills. It has showcased artists such as Brandy, Monica, Jay-Z, and the late Bernie Mac.

Davis still holds the event to promote new talent, but after being diagnosed with AIDS in 1998, she incorporated HIV/AIDS awareness into the show. She now hands out condoms and raises funds for the AIDS Walk in addition to letting patrons have a sneak peak at the newest up-and-coming artists.

“Young people are so heavily informed by the hip-hop community,” Davis said. “I think that it would be a great thing for them to not only give the message of safe sex, but to give hope to the hopeless.”

Bostic, 30, of Red Hook, Brooklyn, is a hip-hop artist who heard about the event through Facebook.

He said he’s grateful to people like Davis who teach him about the risks of having unprotected sex.

Davis was a successful hip-hop promoter, soon to be featured on the debut album of rapper Jay-Z when she received a letter that changed her life. She had taken an HIV test as part of an application for a life insurance policy and the results came back positive.

“I thought that my life was over because at the time when I found out I was HIV positive in 1995, medications weren’t even out yet, they were just starting to get a handle on the disease,” Davis said. “At that time we thought that HIV was a gay white man’s disease.”

Davis contracted HIV unknowingly from her boyfriend, a man she thought she was going to marry. Three years later, she was diagnosed with AIDS.

“I was scared and afraid and thinking about death,” she said.

Her health took a turn for the worst. The disease was eating away at her body and she was rapidly losing weight. Davis said she was on the verge of death when she turned to the Bible for help.

She became an AIDS activist soon after and has since dedicated her life to teaching African-Americans about the disease.

Davis said she still encounters many myths about HIV/AIDS.

“There are still people that think that AIDS is a curse, that people that get AIDS deserve to get AIDS, that their behavior should have been different, that they are promiscuous,” Davis said.

The Centers for Disease Control attributes the high rate of HIV to lack of awareness, limited access to healthcare and HIV prevention education. The CDC also calls attention to the stigma surrounding HIV/AIDS in the African-American community, which prevents many at risk individuals from seeking testing and counseling due to a fear of being shamed.

Levine said it is important to talk outside the box about sex and sexuality, and to take the message from inside the doctor’s office to more unconventional venues.

I LIKE HIP HOP && RAP…ITS KOO…PLUS ITS A GOOD FORM OF EXPRESSION…ITS BASICALLY A WAY OF LIFE FOR SOME!