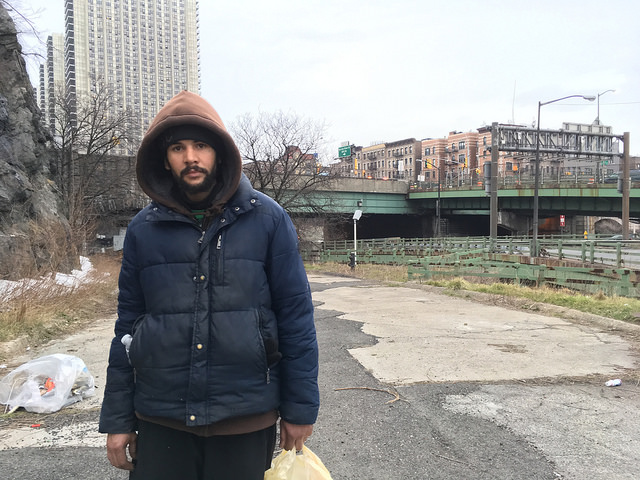 Jose Ramirez, 36, stands alongside the Trans-Manhattan Expressway in Washington Heights. Ramirez, a heroin addict, is among several thousand of New York’s homeless population that choose to live on the streets instead of entering the shelter system. Photo by Razi Syed.

Around 6 p.m. on a breezy overcast Saturday evening, Jose Ramirez was getting ready to pick up the day’s heroin after several hours of panhandling in Washington Heights.

Ramirez, 36, is one of the several thousand homeless New Yorkers who have ruled out spending nights in the city’s shelters, preferring instead to take their chances on the streets and subways. The unsheltered homeless struggle with substance abuse issues and mental health issues , said Isaac McGinn, spokesman for the Homeless Services department.

McGinn said these issues make street homeless a uniquely challenging group to get off the street.

Beginning in 2016, the government of Mayor Bill de Blasio started Home-Stat, a program intended to provide daily outreach to street homeless and develop individualized plans for their eventual movement to a shelter or housing, said McGinn.

“It can take anywhere from one dozen to more than two hundred contacts to bring street homeless New Yorkers indoors,” he said.

Around 690 New Yorkers were helped off the street from March to October 2016.

Under Home-Stat, McGinn said, the city doubled the number of city outreach workers from 191 to 387. The outreach workers partner with existing homeless shelters and identify individuals for placement into drug rehabs, mental health facilities or explore possible transitional housing opportunities. Any homeless who appear to be a threat to themselves or others would be hospitalized.

But accepting the outreach efforts is voluntary and the homeless can’t be forced to utilize services or stay in a shelter, McGuinn said. Despite the city’s efforts, some of the street homeless are reluctant to move into shelters, citing safety and sanitary conditions, among other issues the facilities sometimes have.

“People get into fights in the shelters,” Ramirez said, “You never know what can happen to you.”

Instead, Ramirez spends each night in a sleeping bag underneath trees and other foliage in a closed-off area beside the Trans-Manhattan Expressway.

According to the New York Department of Homeless Services, the city’s homeless population has continued to rise over the past decade. In January 2017, more than 62,000 people slept in homeless shelters – 24,000 more than the roughly 38,000 people who were housed in shelters at the end of 2010. The numbers of homeless are now at the highest levels since the Great Depression of the 1930s.

In addition to the sheltered population, around 2,800 people, like Ramirez, sleep on the street each night, McGinn said.

Ramirez, who was born in Puerto Rico and settled in the Bronx with his mother when he was 15, has been living on the streets for seven years. During that time, day-to-day life has been a battle for survival and a focused effort to find funds for the day’s heroin to keep withdrawal symptoms at bay.

“Every time I wake up, I’m just thinking about getting $20 to get straight,” said Ramirez, while walking along Highbridge Park in black sweatpants and a navy blue raincoat. “Without the heroin, when you be a junkie, you can’t move. You don’t want to talk to people, you don’t want to do nothing.”

Ramirez said he started selling drugs when he was 17. By 19, he was using regularly.

As Ramirez spoke, he stopped often to recall details and at times, struggled to articulate a timeline of events.

According to Ramirez, his mother passed away in 2010. Unable to make the rent payments from the apartment and trying to sustain a heroin addiction, Ramirez reluctantly went out to Washington Heights and found himself a place among the winding expressways to set himself up.

He chose to stay in Washington Heights, rather than the Bronx, where he had been living with his mother for around 14 years.

“This is where I used to come to cop and where I had all my friends,” he said.

Ramirez recalled how he felt the first time he had to panhandle to support himself.

“I’d be like, ‘Yo, can you help me out today?’” Ramirez remembered. His friend suggested he grab a sign and panhandle next to the traffic. Ramirez countered that he was “jones,” or in pain from drug withdrawal, and passersby wouldn’t give him money.

Eventually, Ramirez said he was in too much pain and did what he had to do. He grabbed a sign and planted himself along the entrance to the Trans-Manhattan Expressway, near 179th Street. After around 40 minutes, he had collected $20 and purchased two bags of heroin. Since that day in 2009, Ramirez said panhandling has been the primary way of supporting himself.

Homeless panhandlers in Washington Heights is a familiar sight to residents.

Willie Blain, 57, has lived on the Washington Heights streets since 1989. He panhandles there to buy drugs. 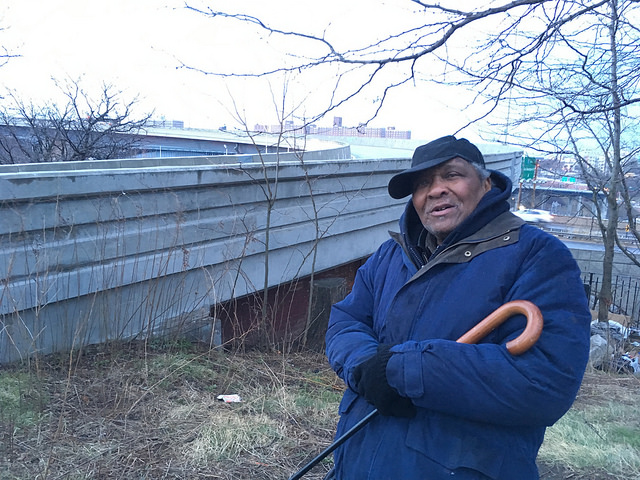 Willie Blain, 57, stands alongside the Trans-Manhattan Expressway near his encampment in Washington Heights. Blain is among several thousand of New York’s homeless population that choose to live on the streets instead of entering the shelter system. Photo by Razi Syed.

He spoke quickly and confidently, with a rapid-fire, staccato cadence, but occasionally mumbled and veered fluidly from topic to topic. Blain said he struggled with schizophrenia.

Alongside the Trans-Manhattan Expressway, Blain has carved out a living place for himself with a black computer chair cardboard boxes and plywood arranged together in a small fenced off area. The road barrier provides a small area of shelter from the rain.

“The thing with other people is –- I know how to hustle so good that they act like they like me, but they don’t like me,” Blain said. “They hate me ‘cause they can’t do like I do. I make money, a lot more money than they do. I panhandle. I help people with their cars, if they have a flat tire. I can do just about anything.”

Blain said he avoids the other homeless in Washington Heights, preferring to spend his time alone.
“I have trouble with people because they like me, want to be like me, but can’t be like me,” he said.

The New York winter, brutal and resolutely unforgiving with nighttime temperatures routinely dropping below freezing, are the most difficult times for the street homeless. During the 2013-2014 winter, the latest year for which statistics are available, six homeless people died of cold-related weather.

Ramirez said he suspects the heroin he uses daily helps him and other street homeless cope with the frigid weather.

“Most of the homeless out here are heroin addicts,” Ramirez said. “People be like, ‘How you survive out here in the wintertime?’ “I’ll be thinking that the heroin keep me warm.“Like as soon as you do the dope, you don’t feel the cold.”

Life on the street is largely a solitary struggle.

“Most of the time I be by myself ‘cause I always ended up getting fucked over,” he said. “I got tired of looking out for people – ‘yo, I’m sick,’ or ‘yo, I need a dollar to get over here.’ Most of these people, they never look out for you,” Ramirez said. “The heroin addicts here aren’t like before – you could be sick and someone would come and get you straight. Now it’s rough.”