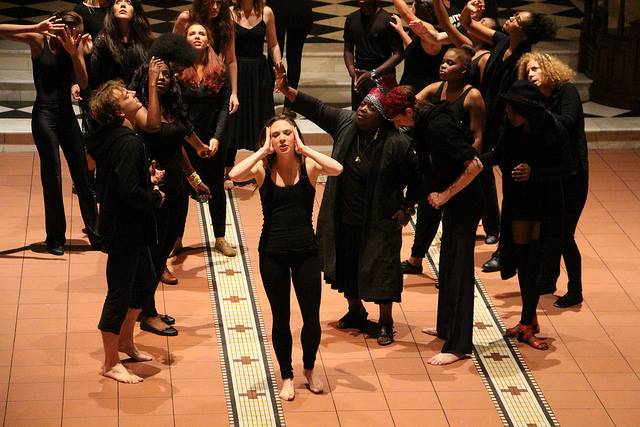 Agony, despair, loneliness, hunger–these are some on the emotions and physical states actors tried to communicate to the audience during the “For the Homeless” ballet performance. Photo by Maria Panskaya

With eyes filled with tears, Ricky sat in the front row at Church of the Holy Apostles, in Chelsea, Manhattan yesterday attentively watching young and old performers acting and dancing on the stage in the new ballet show, “For The Homeless” by Edward Morgan Ballet.

Ricky is not her real name and she no longer uses her last name. She said her age is insignificant to her; while such things as food, shelter and hygiene is of a huge value to her life.

“For The Homeless” a free performance, which was created in collaboration with Goddard Riverside Community Center and Joseph Alexander Awareness Project, revealed the uncensored side of homelessness, trying to raise awareness and educate people on the issue thought dance and expressive acting. The show closes tomorrow.

“A lot of people have a misconception about homeless,” said Celestiena Trower, a former social worker and one of the performers. “We hope that people who see the performance will be more conscious about this issue. The homeless are not weak people or people who don’t want to work. They are all kinds of people: people who had been at war and came back injured, people who worked and lost their jobs. We want New Yorkers to know it.”

Ricky, who had been homeless for about five years, was covered in thick bluefish blankets, with charcoal leather boots slightly showing from underneath her numerous robes and with a red t-shirt brightly popping out from underneath her navy-blue hoodie. She didn’t smell. She wasn’t rude. And she didn’t choose to live on the streets or to beg for food, she said.

Before, she had it all—family, home, food—but one day she lost her job, all savings drained away, she received almost no help form the city government, lost her apartment and friends, and ended up moving to the nearest dumpster.

“I thought it would never happen to me. I would never end up living on the street,” said Ricky. “But it happened. Sometimes I overhear people say that I chose to be this way, but it’s not true. How can someone, in good mind and spirit, intentionally become homeless? It doesn’t make any sense.”

Joseph Alexander, director of the Edward Morgan Ballet and initiator of the Homeless Awareness Project, came up with an idea of a ballet for the homeless four years ago, inspired by one of his students. With ballet being an art of physical strength, grace and discipline, Alexander’s student was coming in late for classes and skipping some of them.

“I remember her crying a lot,” said Alexander, in reference to his student. “I thought that she might’ve been abused at home or something along these lines. But one day she said to me that she and her mama were moving to a shelter and it is hard for her to keep up with ballet training. I was shocked.”

The following year Alexander began to work with kids who lived in shelters, teaching them how to sing and dance. The hard work was paid off when the kids won a talent show with their musical theater/ballet performance.

However, one of the difficulties Alexander had faced since the awareness project started was raising funds. He had always spent his own money to cover ballet expenses such as children’s trips to contests and equipment costs. No donations were coming in from anywhere. But it didn’t discourage him from committing to the project.

“I still reach out to children form different communities, trying to integrate them,” said Alexander. “If you have talent and drive we will foster it.”

Since then, in collaboration with various organizations, he has worked on raising awareness about homelessness, sending the message that homeless people are people too and they deserve help and attention. Despite the Morgan’s ballet company’s nation-wide recognition, the company still train children from impoverished communities and participate in multiple outreach programs.

Approximately 150 people attended “For The Homeless” performance and among those were representatives from different cultures, generations and races—from several homeless people like Ricky to college students to concerned citizens, who live just above the poverty line.

Sharice Burgess, of the Bronx is struggling to provide for her two children and her 94-year-old mother.

“I stay in prayer all the time,” said Burgess. “My family is too close to being kicked out from the apartment. I pray I have enough money to pay rent every month.”

According to the Census Bureau, 21% of New Yorkers live in poverty and struggle to make ends meet every day, just like Burgess. While watching the emotionally intense ballet choreography, Burgess broke into tears, scared that one day she might end up living on the street, sleeping on the stone-cold floor and begging for food.

Zach Mihalko, of Brooklyn attended the performance only because of the Morgan’s outstanding dancing skills and reputation, but said he was educated and inspired by the show and he vowed to volunteer at soup kitchens every week.

“This performance added to my understanding about homelessness,” said Mihalko. “To be honest, I have never even thought about this issue. I didn’t care much. But now I feel like I have to do something to help those unfortunate on the streets.”

Mihalko’s emotional response to the ballet was a reaction Morgan had tried to achieve among all guests. Even though no politicians or governmental officials responded to the Morgan’s invitation to see the performance, he was still happy that their awareness message was able to touch hearts and open minds of regular folks like Mihalko.

“Most people take comfort of their home and food on their table for granted,” said Anne Wangh, of Manhattan one of the attendees. “They don’t think they can end up homeless one day.”