Homeless Vietnam veteran may get a home 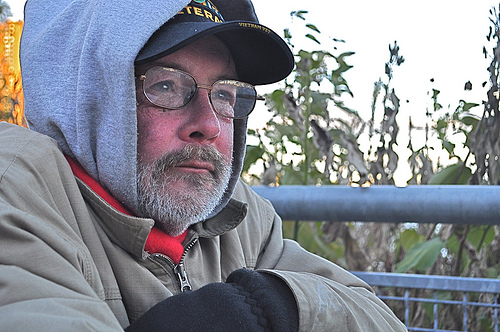 Ron Reineke, 62, gazes at the East River from a bench at Stuyvesant Cove. The Vietnam Veteran has been homeless and sleeping by the river since 2004. (Photo by Meredith Hoffman)

Tipping his “Vietnam Veteran” cap at passersby along the East River, Ron Reineke laughed that he is like a “tourist destination for homeless people.” After sleeping in Stuyvesant Cove Park, on 23rd street, by the East River since 2004, he considers the men out here his family, like his fellow soldiers in Vietnam.

He pulled another tattered green veteran hat out of his plastic bag of belongings.

“This one I’ll be buried with. It reminds me of the dirt, the horrible dirt, I experienced there,” he said.

His bearded cheeks were rosy in the November cold, as he gazed at the water lost in memory.

“I married my wife at Diamondhead in Hawaii when I was stationed there…we had a son…but they both died in a car accident, in 1984,” he said. Then his brother died of cancer in 2004, and Reineke hit hard times.

“Since I went through the war, I can make it through this,” he said, lighting up a cigarette, one of his few indulgences.

The VA estimates 107,000 veterans are homeless on a given night—and about double that number are homeless throughout the year. Nearly half of them fought in the Vietnam War.

But Ron admitted he is getting too old to sleep outside, especially in freezing winter nights.

“You won’t know what it’s like until you try sleeping out here. Make a reservation with my concierge, and bring warm blankets,” he said, as cars roared past on FDR highway.

In the past several years, Ron has lived only on his benefits check from the VA, of $123 a month.

“I got totally frustrated, complacent,” he said.

But now Reineke has hope for a real home again. Jessica Hall, a freelance journalist who befriended Reineke a few years ago, encouraged him to apply for housing this October. After she wrote an email to the VA, a representative visited Reineke.

“He’s been approved eligible for housing by the VA, and now we have to wait 6-8 weeks to hear from NYCHA (New York City Housing Authority),” said Jonathan Kessler, Reineke’s case manager.

Reineke is receiving help through the VA’s housing program enacted in 2009, HUD-VASH. The effort is a collaboration between Housing and Urban Development (HUD) and Veteran Affairs Supportive Housing (VASH).

“I want to get reacclimated to being a human being again. To going where I want, when I want, and not having to look over my shoulder like the cops are going to say I’m doing something wrong. To do things like sit on my couch, watch TV, and have a beer,” he said.

Reineke also applied for more benefits, for compensation from his injuries in war.

“He sustained trauma during his time in Vietnam and wants to assess whether the experiences he continues to have are related to PTSD,” said Kessler.

Since HUD-VASH, homelessness in veterans has decreased dramatically, and Reineke even said he feels a difference at the VA.

“It’s like Vietnam Veterans are finally recognized. The attitudes of the VA staff have even changed,” said Reineke.

Reineke said he hopes other veterans will learn from his story.

Thank you Meredith for this eloquent portrayal of Ron.

Meredith,
Thank you for making us all aware of the plight of those who bravely served our country in order that we might be safe in our comfortable homes and surroundings. It is high time that Viet Nam Veterans be given the respect and gratitude that they deserve.
Love to you,
Tia