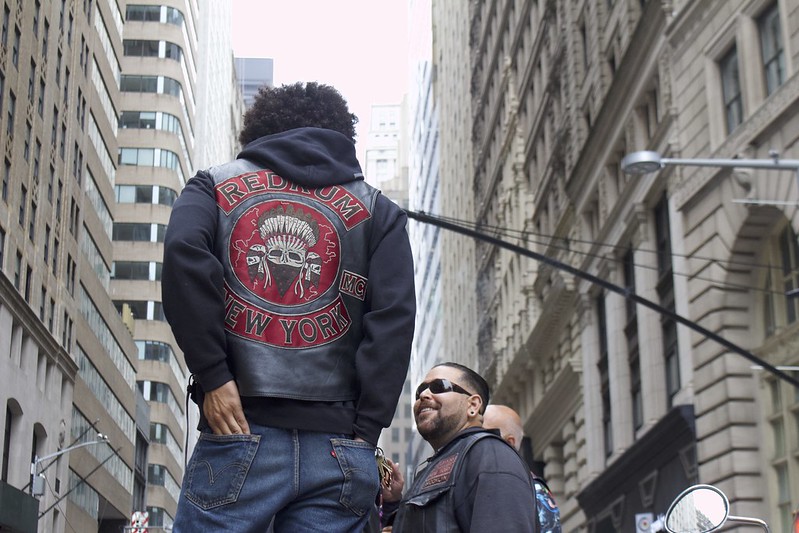 Members of REDRUM gather in front of the Museum of the American Indian ahead of the Indigenous Peoples Day Ride. Photo by Annie Iezzi

Indigenous songscapes and engine revving reverberated off the limestone in Manhattan’s Financial District this morning. In front of the National Museum of the American Indian, more than 100 motorcycles lined the sidewalk. This was the starting point of the Indigenous Peoples’ Day Ride.

Ahead of NYC’s first official Indigenous Peoples’ Day, REDRUM, an Indigenous motorcycle club, hosted the group’s commemorative cruise. Cliff Matias, the founder and international president of the club, made it clear that REDRUM’s purpose was to honor Indigenous heritage, not necessarily celebrate the new holiday.

Matias, who is a member of the Taino and Kechua tribes, explained that the club’s name is not a reference to the Kubrick film “The Shining.”  REDRUM began as two separate words, Red Drum, which constitute a call to follow the Red Road.

“The Red Road is living a traditional life and caring for community,” Matias said. “It’s living in ceremony and being compassionate and understanding to your fellow man.” 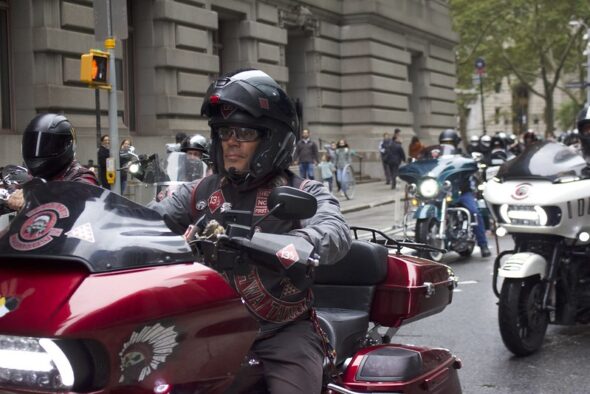 Brotherhood is a central component of REDRUM, with chapters in 25 states and eight countries. Motorcyclists from Maryland, Pennsylvania, Jersey, Delaware and beyond turned up for today’s ride, representing myriad tribes and coalitions.

Some of the club’s members are not Indigenous, but they rode in solidarity today. Other groups, like the Buffalo Soldiers, an African American motorcycle club, turned out in support, as did several deaf and sign-language chapters of REDRUM. The club’s diverse community was one of its main draws for longtime member Joe Campbell. 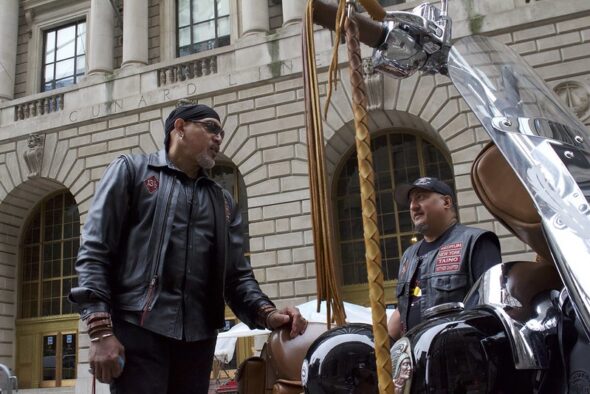 Joe Campbell and Ace Asevedo, both longtime members of REDRUM, parked in front of the Charging Bull on Broadway to direct riders toward the Indigenous Peoples Day Ride. Photo by Annie Iezzi

Campbell has been riding with REDRUM for over a decade since a few of its members helped him when his bike broke down on the side of the road.

“I’m the only one that wears this,” he said, pointing to a burgundy patch that read MAROON. “When the slaves were brought over, some of them escaped, and the Native American tribes took them in.”

Consistent with Campbell’s emphasis on community, the Indigenous Peoples’ Day Ride was a benefit for Native American scholarships. The money raised by REDRUM, $20 per bike, will be combined with tribal funds and profits from a national run to benefit an Indigenous student at Columbia University.

Mutual aid is a core tenet of REDRUM, which hosts rides and fundraisers, as well as benefits for the needs of individuals. Shana Gould of the New Jersey Nanicoke Lenni Lenape Tribe explained that this community engagement is how she first encountered the motorcycle club.

“REDRUM came to our tribal grounds, and they donated a wheelchair to one of our tribal youths,” she said. “It was just such a great feeling for the warmth, the caring, the giving, it wasn’t something we were used to knowing in a motorcycle club.”

Matias arrived on a crimson motorcycle bearing the club’s insignia, and skull wearing a traditional feathered headdress glared out next to the headlight. One of the patches on his leather jacket read 131/2, to represent one judge, twelve jurors, and the half-a-chance Indigenous riders have when persecuted in court. 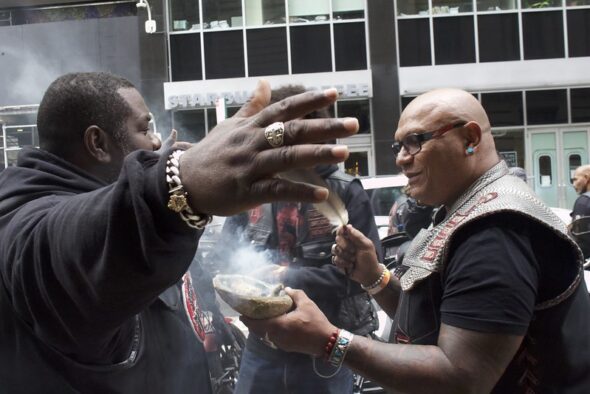 A member of REDRUM, smudges the group’s riders before they mount their motorcycles. Photo by Annie Iezz

Accompanied by a sign language interpreter, Matias thanked the cyclists for gathering. He announced that all riders should be smudged before embarking–an Indigenous practice of purification through symbolic smoke­–for protection and clarity. Then he laid out the path: the motorcyclists would ride from the museum, up Manhattan’s Upper East Side, and across to Randall’s Island where the seventh annual Indigenous Peoples’ Day Festival is underway.

“We’re going to ride safe, it’s a short ride,” he said. “We’ll do a circle around the grounds there, and then we’ll hang out. Many blessings to everyone.”