Hotdogs and Homework program reaches out to Harlem teens 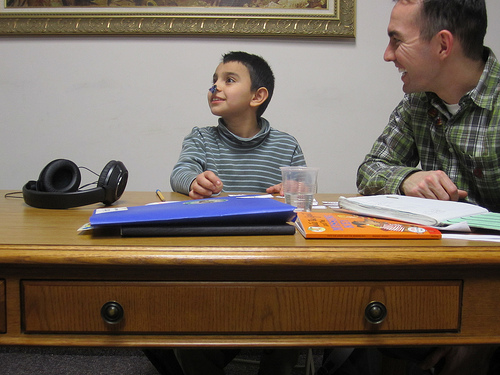 Eric Schubert 8, shows off a sticker his tutor gave him at after school program, Hotdogs and Homework at 128th Street and Lenonx Avenue in Harlem. Eric and his tutor practice flashcards but also take time to be silly. Photo by Dayna Clark.

Three young brothers, wrestled with each other, struggling for possession of a basketball. Two girls giggled and screamed as they ran down the hall, trying to avoid the fray. Other teens stepped out of the elevator, laden with winter coats and backpacks as young adults steered them toward the gymnasium.

Such unrestrained chaos is not usually considered an ideal work environment. But at a Mormon church on the corner of 128th Street and Lenox Avenue, one tutoring program has found a way to capitalize on the mayhem.

Hotdogs and Homework, a tutoring program that meets once a week at The Church of Jesus Christ of Latter Day Saints in Harlem, offers teens a homework-friendly environment where they can work on school projects with young adults who act as both tutors and mentors.

Jessica Allred, 30, a middle school ESL teacher, founded the program in 2002, hoping to help teens with academics and give them positive role models.

“It all started with a Christmas gift drive,” Allred said, referring to her church’s efforts in 2002 to collect donations for schoolchildren in the neighborhood. “There was a moment when I looked at the volunteers wrapping gifts and I said to myself, this isn’t what these kids need. These kids need help with homework and they need positive adult role models who can spend time with them and express interest in their lives.”

Allred coined the phrase “Hotdogs and Homework” to summarize two teenage necessities, adding that she wanted to give them at least one meal a week—and hotdogs were just simple and easy.

“A lot of these kids don’t eat,” Allred said. “They have parents that work all day and kids have to fend for themselves.”

After she moved to Texas, Allred handed the program over to Kristin Robinson, 29, a Hot Dogs and Homework tutor since 2008.

“Every week it’s a hot mess,” said Robinson as she peeled a child off her mid-hug and gently pushed them towards a chair. “I’ve worked with the same girl for two years and we helped her graduate from high school. She had a lot of family drama and she was really worried about [graduating]. There were weeks where it was a little touch and go, but we got her staying after school and then involved in a summer school program and she finally graduated last September. Those experiences are really gratifying.”

According to the 2009-2010 New York City Department of Education progress report, the student graduation rate at some Harlem high schools such as Frederick Douglass Academy is about 41 percent—more than 30 percent below the city average. Although other area schools such as Thurgood Marshall Academy and Mott Hall High School rank much higher, they still fall under the 77 percent city average.

Yet Allred said it’s not only the graduation stats that are against Harlem students.

“Some of these kids that we tutor have parents who were having them at 14, 15, and 16.” Allred said. “These are kids raising kids and they don’t have the skills to be able to teach their children discipline.”

Hotdogs and Homework focuses on preparing teen students for the college workload. But there are a few exceptions, Allred said, including Eric Schubert,8, whose two older brothers attend the program and whose mother felt he needed one-on-one attention.

“She just wanted someone to read with him every week,” said Elle Ponder, 28, Schubert’s tutor for the past two years, adding that he struggled with English since both parents are non-native speakers. “He wasn’t picking up reading skills like his other classmates. But with the extra help every week, those in the program have seen Eric’s improvement.”

Schubert and Ponder’s relationship now extends beyond the student-tutor relationship. Schubert made her a keychain for Christmas and considered her to be a good friend.

It’s these relationships, said tutor Loren Thomas, 28, that keep her coming back week after week.

“I’ve really enjoyed the opportunity Hotdogs and Homework has provided to get involved with my community and to have something in my week that is outside the realm of my daily routine,” he said. “When you see a student who’s been struggling make incremental improvements because of the time and efforts you’ve made, there’s really no better feeling.”