Hundreds gather to remember the devastation of Hurricane 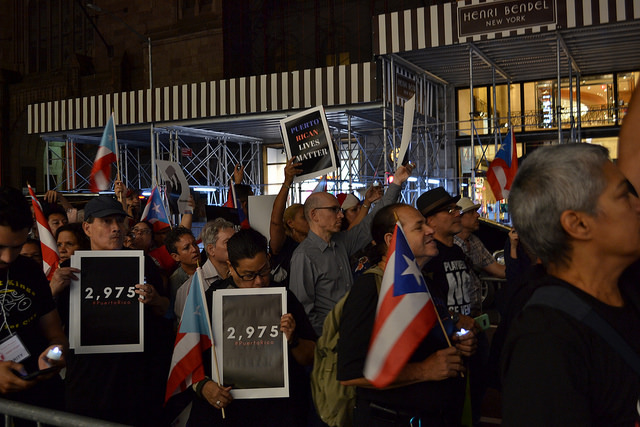 Marchers walk toward Trump Tower in protest on the one year anniversary of Hurricane Maria. They blame the federal government for the deaths and horrific conditions that still remain on the island. Photo by Julia Lee

It has been a year since Puerto Rico was struck by Hurricane Maria and hundreds gathered at St. Bartholomew’s Church in Midtown Manhattan on Thursday to hear from survivors whose lives were wrecked by the storm and its aftermath.

“We lost family, we lost jobs, we lost everything,” Lizmary Garcia, 38, of Guaynabo, Puerto Rico, but who now lives in Bronx.

Garcia, one of the attendees, is one of many who have left the island following the disaster. In Garcia’s case, she left because she has two kids with autism who require extra care,  which was no longer available after the storm, she said.

Hundreds attended the service where they honored the dead.

Other survivors also shared their story filling the church with their words of hope and determination. Many who attended were also survivors and personally affected by the storm.

“I was out there for the first hurricane, Irma,” Isabel Gomez, 57, of the Lower East Side said. “I made it out two days before Maria came in. And then once Maria came in, we had no contact with our family who live out in the mountains of Isabela, Puerto Rico.”

Gomez didn’t learn until four months into the disaster if her family members were safe. She ended up losing some family and neighbors.

“I’m here to represent my island,” Gomez said. “It’s been difficult. There’s a void in the island. There’s a sense of loss.” 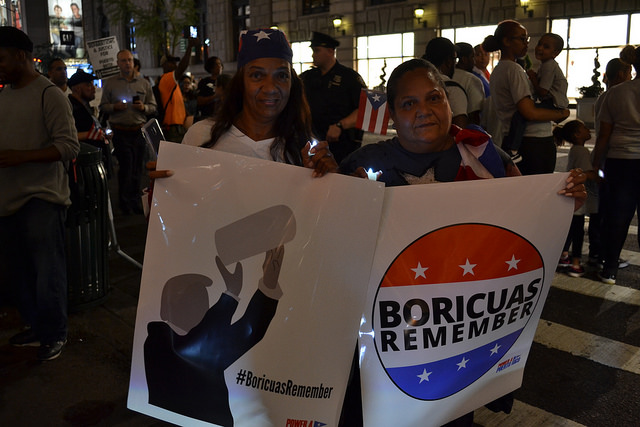 Isabel Gomez, left, poses with her friend at the march for the one year anniversary of Hurricane Maria to Trump Towers. Gomez, of the Lower Eastside, was in Puerto Rico a few days before the hurricane struck the island. Photo By Julia Lee

Gomez visited Puerto Rico two weeks ago where she helped by feeding the homeless and dogs, and picking up the debris. She said there were a lot of homeless people living under tarps as a result of no jobs and resources.

“We are resilient people,” Gomez said. “Yes we’ve lost thousands. Although the president doesn’t want to accept that. That will be on his conscience. But you keep moving on and we keep marching on. But it’s still hard work and still a long way to come before it becomes what it was.”

Many attendees had similar experiences.

“For all of us, it was a scary experience,” Jose Lopez, 32, of Bushwick Brooklyn. “No one would imagine that such a storm would hit Puerto Rico. I don’t know if we’ve seen one this strong in at least 80 years.”

Lopez  said he wasn’t able to contact his family in Puerto Rico during the storm for the first few weeks, but eventually did. They were safe and able to come to New York City.

He said a lot of the pain and anger Puerto Ricans feel is based on the neglect of the federal government.

“Even in the last few days, there’s been pictures surfacing of millions of bottles of water and cases of water that were left on federal land on the island and that wasn’t distributed to families most in need,” he said. “To this day we got folks who still don’t have clean drinking water.”

Many low income bodegas in New York City are scraping what they can to send resources and send money to Puerto Rico, Lopez said.

“It’s not just about the hurricane,” Lopez said. “Puerto Rico was in dire need even before Maria hit.”

“The hurricane and everything that came after the fact is going to have long-lasting effects,” Lopez said. “So tonight we want to lift up all those things. But for years we’re going to be suffering from what took place.”

“We’re also here to say that the real disaster of Puerto Rico has been Hurricane America,” Rodrigo Starz, 36, of the Bronx said. “It has been a failure for the U.S. government to take care of U.S. citizens.”