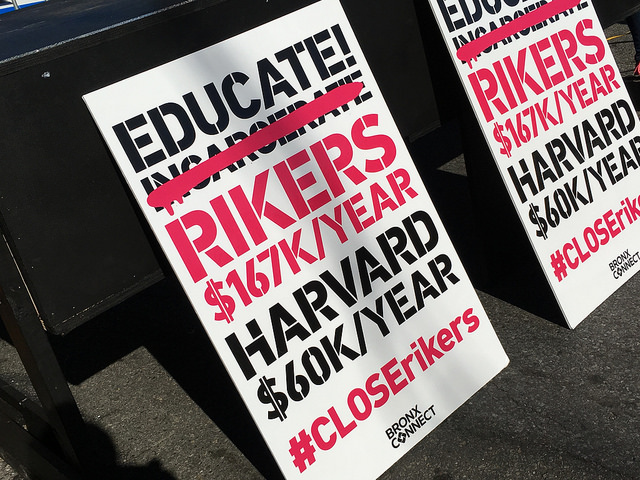 Signs that protestors held up during a roughly 1.6-mile march in Queens yesterday. The march, which was attended by several hundred people, was part of a months-long effort to close down the Rikers Island prison complex, which activists allege is rife with abuses. Photo by Razi Syed.

Hundreds of people participated yesterday in a roughly 1.6-mile march in Queens ending at the entrance of Rikers Island Bridge and rallied for the closure of the island prison complex.

JustLeadershipUSA founder Glenn E. Martin, who organized the march, said he experienced first-hand the abuses at Rikers Island when he was arrested on a shoplifting charge as a 16-year-old.

“I was there for two days,” he said. “On the second day, on my way back to court, I got stabbed four times in the cell – once in the neck.”

Martin organized the march in support of a months-long effort to close down the prison, which Martin alleges has been rife with gang violence and the inhumane treatment of prisoners.

Martin urged those in attendance to tweet their support of the campaign at Mayor Bill de Blasio.

The Katal Center, Vocal New York, the Arab-American Association of New York, Legal Aid, the Women’s Prison Association and Jews for Racial and Economic Justice were some of the organizations that voiced their support of the campaign, which has adopted the Twitter tag #CLOSErikers.

Marchers began their three hour march at 30th Avenue and Steinway Street in Astoria, Queens and ended at 19th Avenue and Hazen Street. At 4 p.m., march organizers held a rally with over a half-dozen speakers, including actress Emily Althaus and State Sen. Gustavo Rivera.

Rivera, whose district covers the northwest part of the Bronx, said that the prison should be closed on both moral and fiscal grounds.

“We all have heard, we all have seen, we all have read and many of you have experienced yourself, the culture of violence that exists on this island,” Rivera said. “The moral argument is that 80 percent of the people that are in there have not even been convicted of a crime, yet we treat them as though we were just punishing them.”

Rivera said the amount of money that funds the prison complex could be used to improve the local community.

“As a matter of fact – $208,500 per individual – do you think that we could use those in our communities?” he asked. “Could we use that to make our school better? Could we use that for economic opportunities in our districts?”

The prison currently houses roughly 8,000 people, the majority of whom are Black or Latino.

“I don’t think that if the American people knew the details and statistics that we know, that they would support the mass incarceration of our people,” Simmons said. “This horrific treatment of our people has to change.”

“I think (Rikers Island) has gotten to the point where the only reform, is to shut it down,” Zaman said.

State Assemblywoman Latrice Walker, who represents District 55, said it’s an economic injustice for the government to invest more in criminal justice than in educating children.

The prison has been a source of controversy for years.

In August 2014, then U.S. Attorney General Eric Holder and Manhattan U.S. Attorney Preet Bharara said a multi-year civil rights investigation into the treatment of adolescent prisoners found that there was rampant abuse of minors, both by corrections staff and other inmates.

Councilman Antonio Reynoso, whose district includes portions of Williamsburg, Greenpoint and Bushwick, said Rikers Island culture destroys those who are detained there.

“This is like a cancer,” Reynoso said, of the effect the prison has on those detained there. “When you come in here, you could be perfectly fine – innocent, just awaiting trial, and let the corruption take hold of you.”