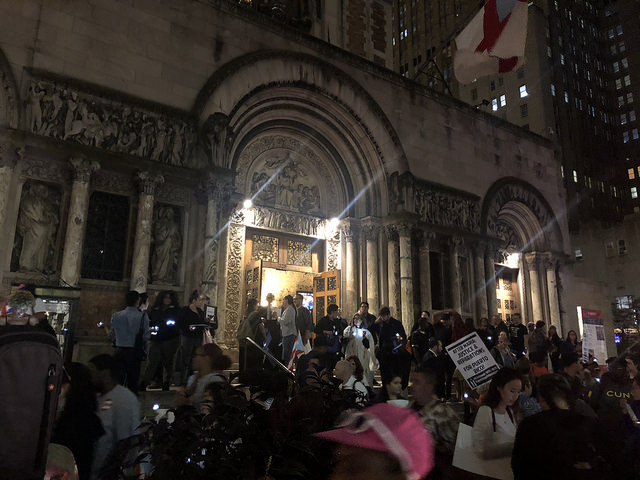 Members of the Puerto Rican community, local politicians, and protesters gathered at St. Bartholomew’s church in Midtown Manhattan last night and then marched to Trump Tower to commemorate and protest the one year anniversary of Hurricane Maria.

But the keynote speakers of the evening were not politicians

Morales and her grandson were in the bathroom for over 48 hours.

Morales had moved to Puerto Rico from New York City in 2013. She wanted to raise her grandson on the island.

“I wanted to raise him in the paradise that I was raised in” said Cruz. “Unfortunately, that didn’t happen for him.”

Carlos Matos, a college student, told those gathered that the stress of the storm caused his already unstable boyfriend to become more violent.

“I had to numb my emotions as my boyfriend, becoming unstable during the chaos, nearly crashed our car into another in a fit of rage” said Matos. “And I had to fight back the fatigue as my mother remained in the hospital”

But, Matos also shared a message of hope.

“Today, I am an aspiring physicist at the City College of New York, he said. “Today, I have a home where I can rebuild myself, and today I can finally begin the process of healing.”

But his closing remarks were filled with anger.

“Our ancestors were soldiers sent to wars not of their making, women experimented on, and slaves who were broken down,” Matos said, “and now, they are the thousands dead as a result of gross negligence by the government in response to Hurricane Maria.”

After the services the attendees marched to nearby Trump Tower. They wanted to show their anger for the Trump Administration’s response to the storm and the chaos that followed. Electricity was just recently restored to the island.

The Trump administration has been widely criticized for its response to the storm. FEMA’s own internal report cited inadequate staffing, communications issues and issues with insufficient quantity and distribution of supplies. Trump and his administration insist that the response to the disaster was more than adequate, going so far as to reject the independent figure of 3,000 hurricane related deaths.

Peter Gudaitis, the executive director of New York Disaster Interfaith Services, one of the organizers of the service and protest, said that the president needs to admit the government’s failures in Puerto Rico.

“I think the president worries too much about what is going to make him look bad, and that he should worry more about the American people,”said Gudaitis. “We know that more people died during the first year after Hurricane Maria then would have normally died in a hurricane of this kind. These are facts.”

Protester Julissa Bisona said that the president hasn’t done enough to show solidarity with the island, which is a commonwealth of the United States.

“He hasn’t been back in Puerto Rico since it happened,” she said. “Why hasn’t the president come back since he was seen throwing paper towels into the crowd?”

Gudaitis said that what Puerto Ricans need most is community and jobs.

“The evacuee community needs jobs,” said Gudaitis. “These are people who are well educated and trained and have a lot of experience. Without jobs, they can’t find housing, these are people who work hard, and want to pay their way.”