In life after prison, a former convict finds peace 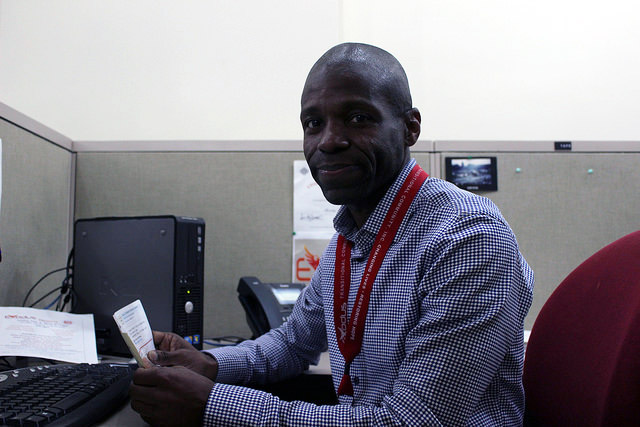 Daud Nashid, 51, at his desk at Exodus Transitional Community in Harlem. By Amy Zahn

Daud Nashid is 51. He wears leather shoes, crisp button down shirts, and size 30-30 jeans — when he can find them.

Nashid spends his weekends shopping. Downtown, he said, is where he’s able to find things that fit his 5’’6’ frame. He likes to patronize smaller establishments, ones that don’t feel as corporate.

“I’m kind of finicky with the shopping,” he said.

That’s because for 28 years, he wore nothing but solid green uniforms day in and day out, what he calls “prison greens.”

There are 51,000 people imprisoned in the state of New York, but Nashid is no longer one of them.

New York City has slashed its jail and prison populations by over half in the last 30 years, while the rest of the country’s incarceration rates have only climbed. But the shrinking of the city’s prison population has given rise to a different kind of population — people trying to find their way back into society after spending time behind bars.

According to the Department of Justice, the average first-time prison sentence is just two years. Fifty-five percent of the prison inmates in the state of New York are on their first felony conviction, meaning they’ll be out soon.

Julio Medina is the founder and CEO of Exodus Transitional Community, an organization that connects formerly incarcerated people with the necessary job and life skills to re-enter society. According to Medina, aside from housing and employment, the biggest struggles a formerly incarcerated person may face are reconnecting with family and basic resocialization.

In the five years since he’s been out, Nashid has struggled with both.

“My mother’s glad that I came home,” he said. “But my mother was one of the first ones to say that I deserved to be punished.” Nashid began selling drugs in seventh grade. He wanted to make some money for his family — he, his mom and his brother.

“I made a lot of money selling crack cocaine and damaging my community, something I’m not proud of today,” said Nashid. “I didn’t manufacture the drugs, but I could have decided not to do it.”

But that life of lawlessness, he said, eventually led him to something much worse.

When Nashid was 18, he kept a safe at his mom’s house. Before it was stolen, the safe contained $27,000, some crack cocaine and a handgun. The week after the theft, Nashid confronted the robber at a park.

“I had a handgun, a small, little .25 caliber handgun. It just happened so quick. After five or six seconds, I took the handgun and shot him. I remember him turning and running, and I was still shooting as he ran,” Nashid said. “And that was that.”

The victim’s name was James Drummond, and he and Nashid had been friends their whole lives. They lived in the same building. They’d gone on trips together.

“I shot and killed my childhood friend over drugs,” he said. “He robbed me of some physical things, some tangible things, but I robbed him of an opportunity to see his mother get old, to have a career, to see his daughter grow up.”

Nashid was sentenced to 25 years to life, and was paroled after 28. His mother was there for him through it all, but Nashid hasn’t forgotten that people in his life, including her, had been close to James Drummond, too. People who came into his life after prison have also had a hard time accepting his past, including Carmen, his girlfriend of several years.

Carmen is the daughter of a retired police officer, and according to Nashid, grew up with a “certain perspective” of people who broke the law. Nashid is far from the only former prisoner who’s had trouble reconciling his past with the people in his life after getting out.

Medina said connecting with family and friends after serving time can be a monumental task, and can contribute to a host of other issues a former prisoner is likely already facing, like difficulty finding housing and employment.

“I think some of the discrimination is inherently ingrained in our system,” Medina said. “We need this sense that someone has to be evil,” he added, in order to have been incarcerated.

While Nashid was able to find a job unusually quickly — two weeks after being released — it didn’t come without difficulty. At his first post-prison job, his coworkers at the clinic he worked at circulated a petition about him. They didn’t want to work with a convicted murderer.

“They took it to the CEO,” he said. “And the CEO was like, ‘Get out of here, I hired him. I think he deserves a second chance.’”

Nashid has been working to earn that second chance ever since.

“A person’s lost their life, and I’m responsible for it,” he said.  “In accepting full responsibility for it, I’ve decided to move my life in a different direction. I’ve decided to honor the memory of my victim by committing to resolving violence peacefully.”

Nashid has worked at Medina’s organization for the past two years, where he runs skills workshops in prisons throughout the state and recruits parolees to come to Exodus and use their services.

“Despite what a lot of people think, that nothing good can come out of prison, we’re proving them wrong. We’re doing it daily,” Nashid said.