Indigenous language is alive on a NYC radio station 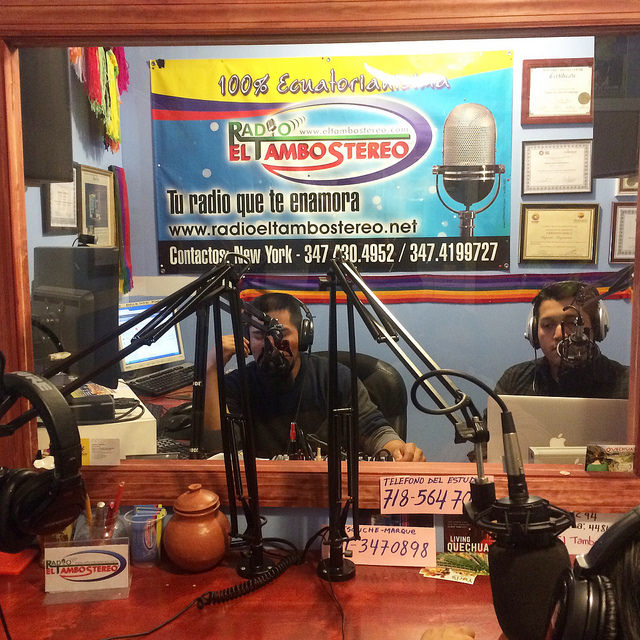 It’s Friday night in the Bronx and Latino radio station Radio El Tambo Stereo is once again filling the airwaves. Not with cúmbia rhythms or bass-heavy reggaetón, but rather, with a pre-colonial indigenous language of the central Andes.

Kichwa-Hatari, or Kichwa Rise, is a weekly broadcast in Kichwa, an Ecuadorian (and mutually understandable) variation of a South American spoken tongue called Quechua – a language that predates the Incan Empire. It’s the only known Kichwa radio broadcast in the country and was founded by three friends in a Bronx apartment in the summer of 2014.

Ecuadorian-born Segundo Angamarca is co-founder and host. He said that above all, the show’s mission is to strengthen the language of Kichwa. “We want to maintain our culture here in this country without fear, and to show who we are,” he said.

Each broadcast incorporates Kichwa lessons, Andean tunes, and community workshops on issues that matter most to Latino migrant communities in New York and the nation. On a recent Friday, Angamarca hosted a discussion with an expert on immigration law.

Above all, the program gives Quechua, a language UNESCO lists in its “Atlas of the World’s Languages in Danger,” a chance to evolve, and as a result, survive. “Kichwa isn’t this language or culture that stays in the Andes. It’s taken a new form now,” said co-founder and second-generation Ecuadorian Charlie Uruchima.

From her Brooklyn apartment, Elva Ambía Rebatta picks up a small lute called a charango and sings a traditional Peruvian folk song in Quechua. Born from the melodies of nature, Kichwa is a language that begs to be sung. The song’s lyrics and rhythms are said to mimic the act stomping on the shells of sweet peas after harvest.

Rebatta is the co-founder of NY Quechua Initiative. As a native Quechua speaker from Peru, she works to preserve the endangered language and to minimize the linguistic isolation many Quechua speakers in the United States experience. There are no accurate numbers on Quechua speakers in New York City, but Elva says the group has brought native speakers together and is gaining momentum through language lessons, the publication of trilingual (Quechua, Spanish, and English) children’s books, and Andean music events.

“The goal is to make this language survive forever, to be alive,” she said.