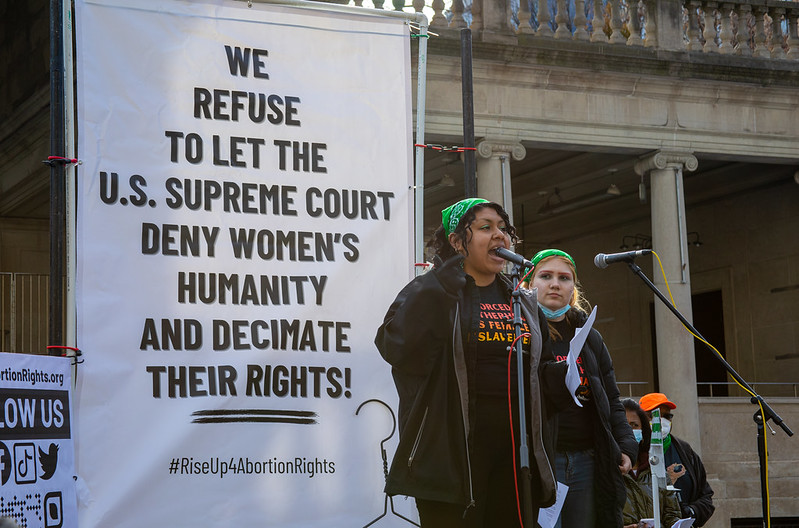 Michelle Xie, a member of RiseUp4Abortion and one of the main organizers of the march, calls for action at Union Square for people to “remember that women’s rights are human rights” and that “forced motherhood is female enslavement.” Photo by Michelle Ng-Reyes

Over 100 people organized in the downtown Manhattan park to march from Union Square to Washington Square Park in support of safe and legal abortion, preserving women’s rights, and in support of preserving Roe v. Wade.

In 2018, Mississippi enacted a law that bans abortions after 15 weeks, with many other states attempting to pass similar laws and failing, due to the precedent set by the Supreme Court’s 1973 ruling in Roe v, Wade. Now, after nearly four years, the Mississippi abortion law has come before the Supreme Court. If the Supreme Court rules in favor of upholding the Mississippi law, decades of precedent would be overturned, more than 20 states that have been trying to ban abortion would be within their right to do so. The march was organized by RiseUp4Abortion, an organization committed to advocating for abortion and women’s rights.

This year’s International Women’s Day, theme is #BreakTheBias, encouraging people to “imagine a world free of bias, stereotypes, and discrimination” by forging women’s equality and securing their rights. Yet one of women’s biggest rights has come under attack: bodily autonomy through access to safe and legal abortion. Many believe that Roe v. Wade may get overturned sometime this year, and more states are placing restrictions on and even completely banning abortion ahead of the Supreme Court’s decision, which may occur in the next few months. 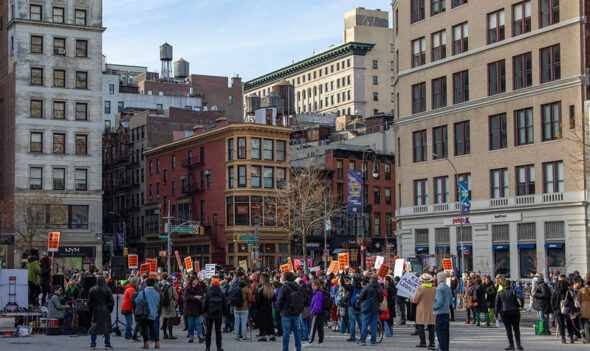 Protestors and members of different advocacy groups gather at Union Square on the corner of Broadway and East 17th Street on International Women’s Day. Photo by Michelle Ng-Reyes 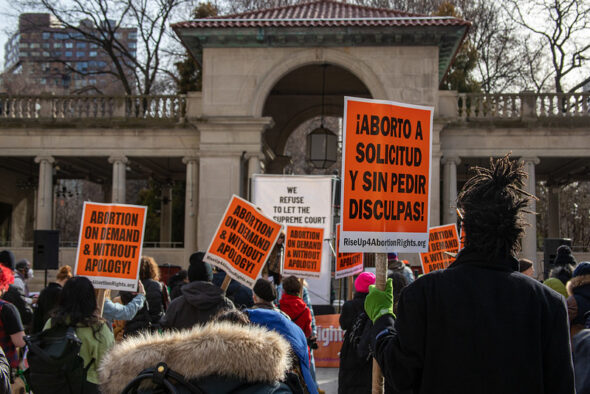 RiseUp4Abortion handed out signs that read “Abortion on Demand and Without Apology” in both English and Spanish. Photo by Michelle Ng-Reyes 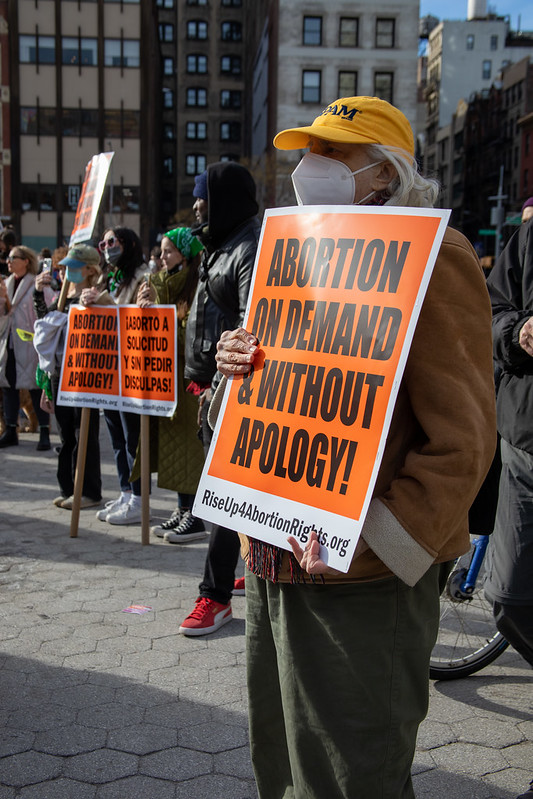 Women of all ages came to support today’s protest. Photo by Michelle Ng-Reyes 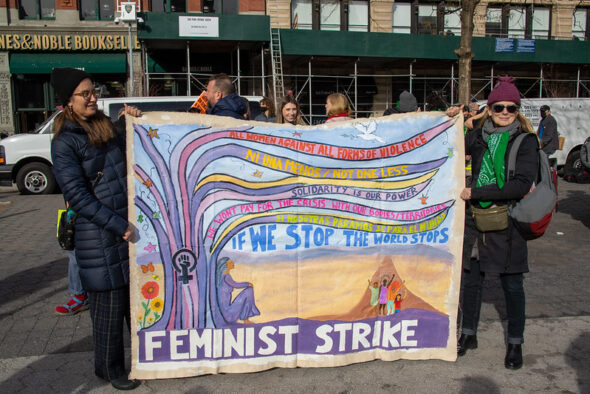 Two women hold up this “Feminist Strike” canvas, showcasing the “solidarity among all women in supporting each other,” featuring phrases of unity and resistance in both English and Spanish on her piece. Photo by Michelle Ng-Reyes 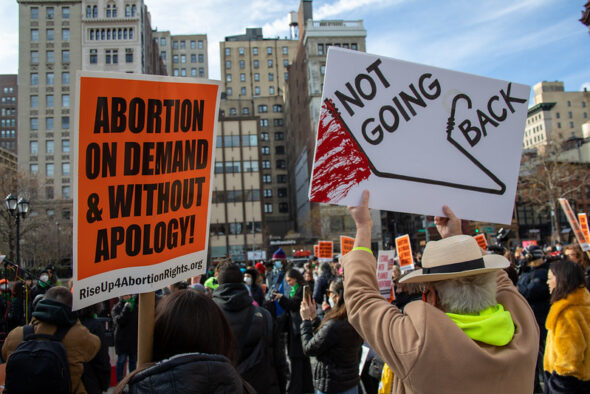 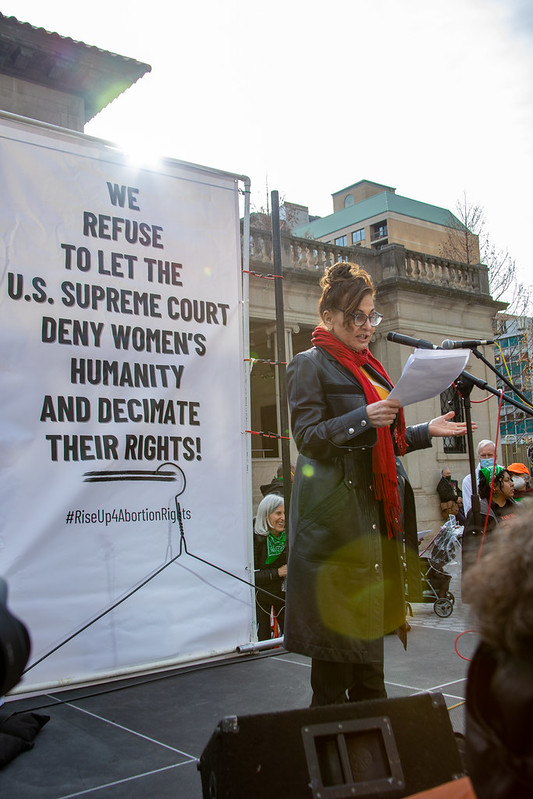 Kathy Najimy, actress, comedian, and women’s rights activist, shares at the rally in Union Square about her abortion experience at the age of 19. Photo by Michelle Ng-Reyes 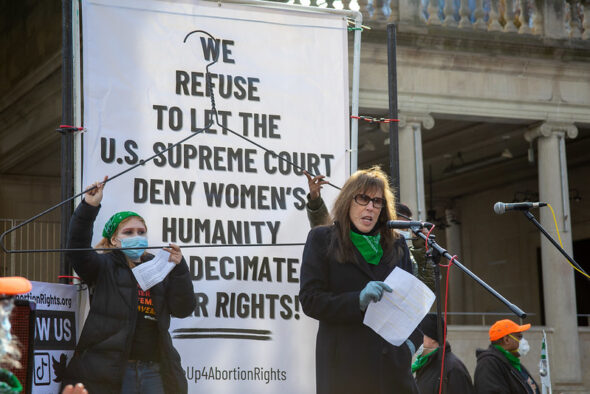 ) V, formerly known as Eve Ensler, who is a playwright, author, performer and women’s rights activist, speaks in support of safe and legal access to abortion at the rally in Union Square. Photo by Michelle Ng-Reyes