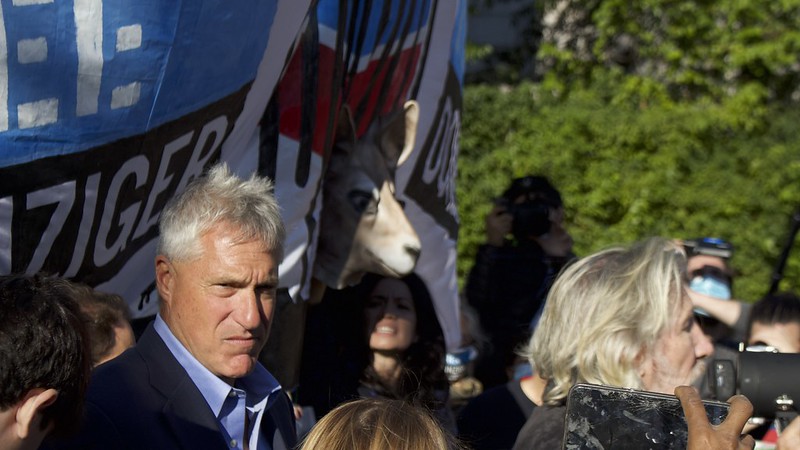 Steven Donziger, disbarred human rights and environmental lawyer, before his criminal contempt sentencing. In the background, a protester lofts a kangaroo mask to represent what protesters term: “kangaroo court proceedings.”

Dozens of Ecuadorians, environmental activists, and union members rallied outside the Southern District of New York  federal courthouse in Lower Manhattan this morning, but according to Judge Loretta Preska, they were protesting a case that had already been decided.

Today, disbarred human rights and environmental lawyer Steven Donziger was sentenced to six months in prison for criminal contempt. He has refused to turn over his laptop since 2014, when a federal judge ordered that measure in a racketeering case brought against Donziger by the corporation Chevron. Judge Preska, who presided over today’s sentencing, made it clear that Donziger’s previous efforts to hold Chevron accountable for polluting were irrelevant to his current predicament.

“This case is wholly unconnected with responsibility Chevron may have regarding the oil spill in the Amazon rainforest…this case is about rule of law. All are equal under the law,” Preska said from the bench.

BREAKING: Flouting the U.N. decision ordering my release, Judge Preska sentenced me to 6 months in prison. Still on house arrest until the appeals court rules on my motion for release pending appeal. Picture is from rally this morning.

Outside, the protesters were united in support of Donziger, who has waged a three-decade-long legal battle against Chevron for polluting Ecuador’s Amazon rainforest and killing potentially thousands of mostly indigenous Ecuadorian people.

“En pueblo, unido, jamás será vencido!” chanted the crowd. The rallying cry translates to “The people, united, will never be defeated,” and is an international symbol of the New Song Movement in South America. 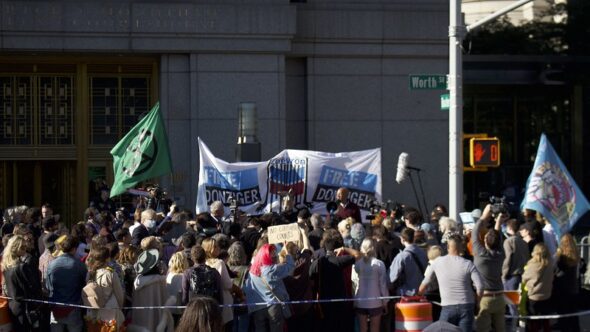 Protesters gather outside the District Court in Southern Manhattan to support Steven Donziger. He was charged with criminal contempt after a lengthy legal battle with Chevron, regarding that company’s pollution of the Ecuadorian Amazon. Photo by Annie Iezzi

Internationally, labor leaders, public interest attorneys, and civil rights leaders worry about the precedent set by the jailing of a human rights lawyer following his crusade against a multinational corporation.

“It’s a kangaroo court,” said lifelong union organizer Ray Rogers. He pioneered the Corporate Campaign strategy, and he plans to employ this tactic against Chevron, as he has in his Killer Coke campaign against the Coca Cola company.

This view was only heightened by the U.N.’s Human Rights Council subgroup, the Working Group on Arbitrary Detentions, decision on September 24, which categorizes Donziger’s “deprivation of liberty” as “arbitrary.” Furthermore, Donziger has long claimed that the federal judge who found him to be in contempt, Judge Lewis Kaplan, enjoys secret investments in Chevron, which would have required that he recuse himself from the case.

Abuses of power were on the minds of many protesters, including one wearing a sparkly cape covered in pins.

“I’m mad that all this time grownups in power haven’t used their power to help Steven Donziger,” said 11-year-old climate activist Avery Tsai into a bullhorn.

Donziger attempted to hold Chevron accountable for the abuses of the company it purchased, Texaco, an American oil brand. Though Chevron is an American multinational company, the case was transferred to the judiciary of Ecuador prior to 2011.

According to Ecuadorian court findings, for three decades Chevron dumped billions of gallons of oil and refuse onto Indigenous ancestral lands in Ecuador to conserve costs. In 2011, the same court ordered that Chevron pay $19 billion to remediate damages, a penalty that was lowered to $9.4 billion on appeal and then dismissed in light of Donziger’s racketeering charge. 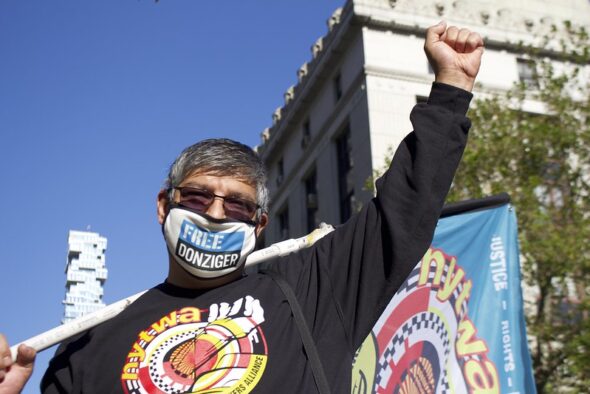 Victor Salazar, an Ecuadorian immigrant and member of the New York Taxi Workers Alliance, joins the protest in support of Steven Donziger. Photo by Annie Iezzi

“I used to live there,” said Ecuadorian immigrant and member of the New York Taxi Workers Alliance, Victor Salazar. “I was a child, so I didn’t realize the intensity of the situation until much later in life, but I saw my cousins’ pets: the dogs would come in with oil on their paws, and the water was so polluted.”

Waving an NYTWA flag, Salazar stressed the importance of unity.

“It’s about unity, and that’s why I’m here. If our struggles are united, we fight, and we don’t give up, we will make a difference in this world,” he said.

As for Donziger, today’s sentencing was a defeat on multiple levels. He will spend the next six months in prison, he will remain disbarred, and he will not see Chevron pay its dues to the people of Ecuador.

“I respect the law,” he said in response to Judge Preska’s implication that he did not. “I have been fighting through the law for the people of Ecuador for years.”

Donziger is still on the hook for attorneys’ fees totaling $3.4 million, payable to Chevron.